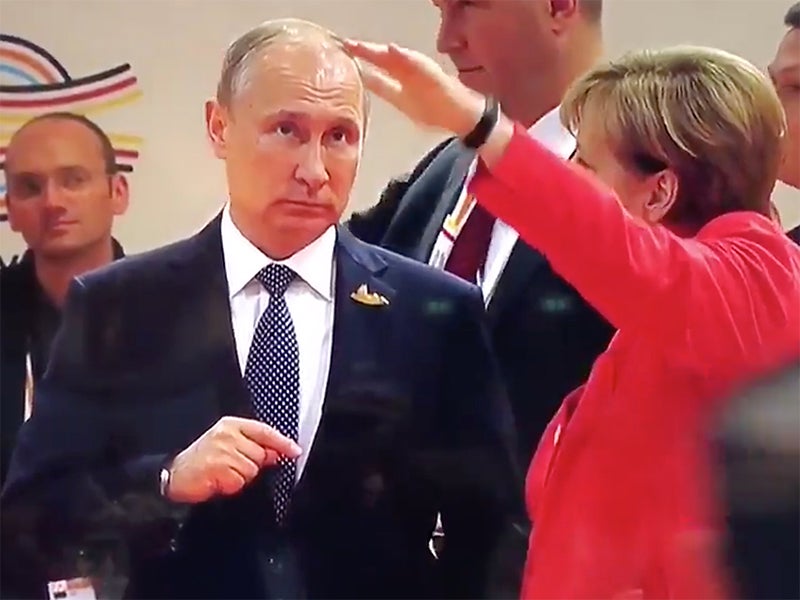 There are few better places on this planet to capture interesting candid shots than at summits like this week's G20 in Hamburg, Germany. Awkward diplomatic encounters, strange personality traits, eye-rolls and so much else from the most powerful people in the world are on display and often caught on camera—the perfect fodder for a hungry press and for TV pundits who are looking to draw conclusions anywhere they feasibly can.

But once in a while what is being discussed is actually pretty conclusive based on hand gestures alone, and when Vlad and Angela talk ballistic missiles, they do much of it with their hands.

One may think this animated display is a product of cross-lingual conversations, but that isn't so. Putin is fluent in German, Merkel is fluent in Russian, and both can also speak English. So the language barrier is not a factor, but visual aids surely help when talking about the flight path of rockets.

It is very likely the two world leaders, who have held a historically close but also at time tenuous relationship, are discussing North Korea's latest and most impressive missile test. As we have discussed in detail, the missile, now classified as an ICBM, flew a very steep parabolic arc to keep it from flying far downrange and to prove its theoretical range capability. It seems Putin is trying to make this clear to Merkel with both his words and his hands.

Surely the German Chancellor has been briefed by her intel services—or has watched a few minutes of basically any news network this week—on the nature of North Korea's most recent missile test. The height that the missile flew to was the key aspect as to why the test was so concerning. So is Putin "mansplaining" here?

We'll let you be the judge.