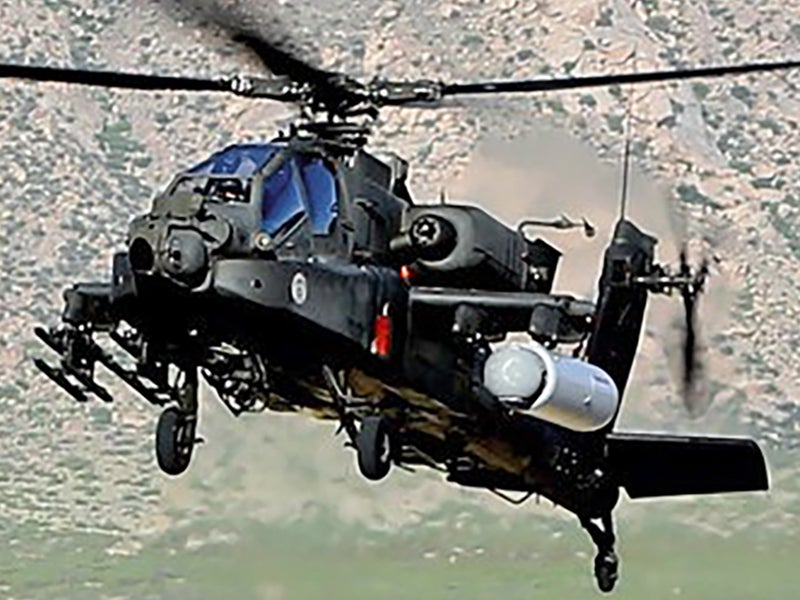 We reported on the concept and test program over a year ago, and now it has finally happened—a AH-64 Apache equipped with a tactical high-energy laser (HEL) successfully took out targets on the White Sands Missile Range. The test is a major breakthrough in directed energy weapons and rotary-wing air warfare to say the least. Above all else it is a glimpse of what's to come on the battlefields of the near future.

The statement from Raytheon, the primary contractor on the laser test program, reads:

It was the first time a fully integrated laser system successfully shot a target from a rotary-wing aircraft over a wide variety of flight regimes, altitudes and air speeds, proving the feasibility of laser attack from Apache.

The system tracked and directed energy on a stationary target at a slant range of 1.4 kilometers. (Slant range is the line-of-sight distance between two points at different levels.)

The data collected from the test, including impact of vibration, dust and rotor downwash, will help shape future high-energy laser systems.

"Our goal is to pull the future forward," said Art Morrish, vice president of Advanced Concepts and Technologies for Raytheon Space and Airborne Systems. "This data collection shows we're on the right track."

For the test, Raytheon coupled a variant of the Multi-Spectral Targeting System, an advanced, electro-optical, infrared sensor, with a laser. The MTS provided targeting information, situational awareness and beam control."

It remains unclear exactly how powerful the laser is that is flying on the Apache, but it sounds like it is surprisingly well integrated for an experimental bolt-on device. The system's size is also impressive. For a totally new exploratory program like this, the entire laser package is only about the size of one of the Apache's external fuel tanks, which points to the possibility that this system can go from testing to the front lines faster than one may expect.

Still, it's not like American attack helicopters will be plinking tanks with lasers anytime soon, but they already have weapons that do that and tactical high-energy lasers can do things today that no weapons on an Apache or any other attack helicopter can. In my previous piece introducing the "Laser Apache" I wrote:

"Modern attack helicopters are all about precision engagement capabilities. Unless you want a fairly large explosion that will obliterate a small building or a few vehicles, the best weapons available to Apache crews are the helicopter’s 30mm cannon and the recent addition of laser-guided rockets. Yet even these surgical weapons, with their highly-localized effects on the battlefield, still use high-explosives to make a big bang; if you want to be extremely precise with almost no chance of collateral damage, lasers are the way to go...

If you want a tactical aircraft fighting in a combat zone to destroy a piece of equipment, like a power generator, but without destroying the structure it's attached to, or to disable a vehicle without killing anyone standing around it, you're out of luck unless you have a laser. With this in mind, there's a clear and highly relevant requirement for a weapon that can accomplish such feats, a requirement as yet unfulfilled...

Think about the ability to target a small group of individuals, or even a single individual, on a street without hurting other innocent bystanders going about their business just yards away. Being cooked by an invisible laser beam over the span of a few seconds would be a pretty nasty way for even a bad guy to go, but at least those close by would not have to be sacrificed in the process."

"Precision weaponry has changed the way we fight wars and has helped greatly when it comes to avoiding non-combatant casualties, yet even low-yield warheads inside the smallest of guided bombs and missiles explode and can cause unintended harm. If aircrew could just target a person holding a weapon, or a small group persons holding weapons, and take them out using 'non-kinetic' weaponry, than we can save a lot of innocent lives, not to mention money, as even a mass-produced AGM-114 Hellfire missile each cost tens of thousands of dollars per round.

Such a capability would be somewhat analogues to a phaser from Star Trek and just the psychological affect on the enemy knowing that they could erupt in flames at any moment while operating in the open could potentially be a game changer. It could also greatly alleviate the risk to human shields as air power may not be able to destroy a large target that has innocents commingled with the enemy inside, but it could shut down that facility's operations long enough for ground forces to take the building down just by parking a aircraft with a solid-state laser above. If anyone has a weapon outside the facility, or even comes and goes from it, they could be cooked in an instant with almost no chance of unintended injuries or deaths.

The same can be said when it comes to eliminating threats emanating from critical infrastructure or buildings with cultural significance. If there is a sniper atop a Mosque, than an aircraft equipped with a laser could disable or kill just that sniper, leaving the Mosque totally intact."

For special operations command in particular, equipping their helicopters with weapons like this, and being able to do everything from silently cutting power lines and melting generators to starting diversion fires and disabling vehicles from on high is clearly an incredibly attractive capability set.

If anything, adding a podded laser to combat helicopters in general is among the most sensible application of solid-state tactical lasers today, and far less ambitious when compared to other ongoing aerospace laser development programs, ranging from C-130 mounted lasers, to fighter mounted lasers, to high-flying drone mounted lasers. Even though they are not sci-fi powerful at this time, they are really the lowest collateral damage airborne weapon imaginable today.

As solid-state lasers become increasingly compact and higher power, their battlefield applications are becoming more clear and their development is accelerating. With today's test in mind, their first offensive deployment on the battlefield could come from the rotary wing community, and that is very exciting.