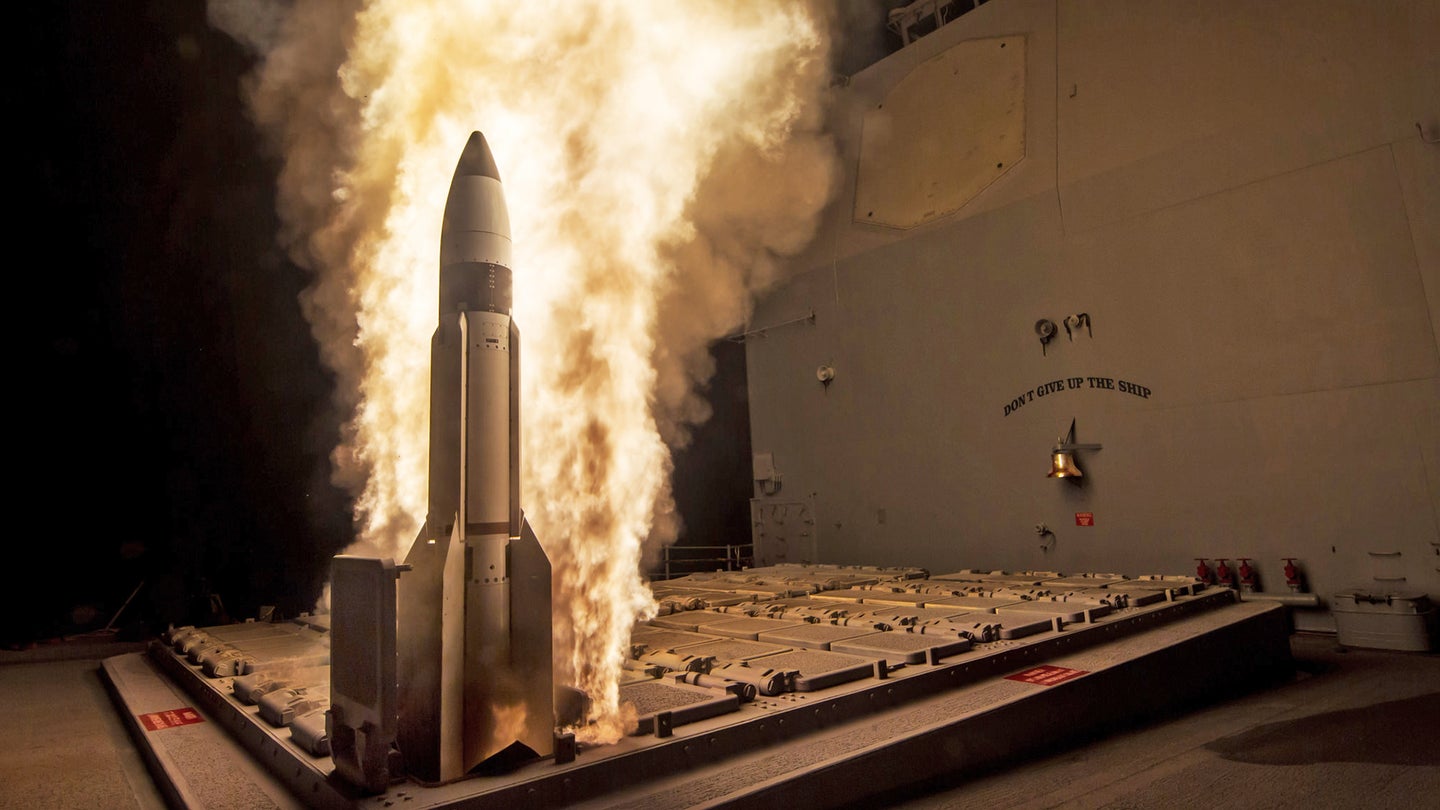 The much anticipated SM-3 Block IIA interceptor has failed during a test engagement over the Pacific. This was the fourth flight of the SM-3 Block IIA, and the second intercept attempt, the first occurring last February and was deemed a success.

The failure comes as the Missile Defense Agency has been riding high following a very high profile and successful ICBM intercept test by their ground-based missile defense interceptor. A statement from the MDA reads:

"The U.S. Missile Defense Agency and the Japan Ministry of Defense conducted a development flight test today of a new Standard Missile-3 (SM-3) Block IIA missile off the coast of Hawaii.

A planned intercept was not achieved.

The SM-3 Block IIA is being developed cooperatively by the U.S. and Japan to defeat medium- and intermediate-range ballistic missiles. This is a new, developmental interceptor that is not yet fielded by either country.

At approximately 7:20 p.m., Hawaii Standard Time, June 21 (1:20 a.m. Eastern Daylight Time, June 22), a medium-range ballistic target missile was launched from the Pacific Missile Range Facility at Kauai, Hawaii. The USS John Paul Jones (DDG 53) detected and tracked the target missile with its onboard AN/SPY-1 radar using the Aegis Baseline 9.C2 weapon system. Upon acquiring and tracking the target, the ship launched an SM-3 Block IIA guided missile, but the missile did not intercept the target.

Program officials will conduct an extensive analysis of the test data. Until that review is complete, no additional details will be available."

The SM-3 Block IIA features a variety of upgrades over the Block II version including a larger, more maneuverable exoatmospheric kill vehicle with longer endurance and an upgraded infrared targeting system with enhanced target discrimination abilities (being able to pinpoint the warhead among debris and decoys). Physically speaking, the SM-3 Block IIA is really new missile, with a thicker diameter along its entire mold-line compared to its predecessors. This allows it to carry more fuel, thus offering higher fly-out speeds and more range. When combined, these capabilities should give the SM-3 Block IIA a wider significantly engagement envelope and a better probability of kill against the targets its fired at.

The missile was primarily designed to take on up to intermediate-range ballistic missile (IRBM) threats, but it could possibly be used against ICBMs under certain conditions sometime in the future. Still, testing so far has been against far shorter-ranged ballistic missiles.

Another big element of the SM-3 Block IIA is that it is a cooperative program between Japan and the US. The idea behind this risk sharing arrangement is that once operational, the missile will equip Japan's Aegis BMD capable destroyers and possibly Aegis ashore installations in Japan itself. This is in addition to being provided to the US Aegis BMD capable surface combatants and Aegis Ashore batteries in Eastern Europe.

Still, even after years of testing and the operational deployment of multiple types of missile interceptors on the ground and at sea, a ballistic missile defense "shield" so to speak remains elusive. Not only are the missiles' reliability questionable, but so is the globally distributed infrastructure of sensors and data links that supports them. Additionally, it is widely known that there is a shortage of actual interceptors, with Navy surface combatants having to swap inventories at sea to fill empty vertical launch cells when leaving and arriving on station.

Even Ground Based Interceptors are just a few dozen in number, and multiple salvos of multiple missiles will be fired at a real target in an operational engagement. That, and the fact that many of the missiles are down for upgrades, servicing or other modifications at any given time, gives a picture more of ballistic defense screen as much as anything else. This may be adequate for now, but as states like North Korea and Iran continue to develop and bolster their missile arsenals, more missile defense capacity will be needed, not less.

So far the Navy's hit-to-kill interceptor record stands at 27 kills out of 35 attempts since the program began back in 2000. This number is largely misleading though because many of these intercepts occurred under tight, laboratory like conditions, not ones that representative of an operational use.

Still, Aegis-based BMD remains among the more promising and relevant BMD solutions around, and today's failure will be deeply analyzed and changes will be made to the next SM-3 Block IIA iteration to try and correct any errors and improve the system overall. Maybe above all else, the SM-3 Block IIA's larger rocket section is most exciting as it "maxes out" the Mark 41 vertical launch system's cell dimensions and could be paired with other payloads and warheads. Some of which may feature entirely different concepts—such as using it as a base for a long-range prompt strike application or to carry an interceptor capable of swatting down hypersonic weapons blazing through the earth's upper atmosphere.

Considering how ballistic missile threats are becoming a much more tangible reality and making headlines regularly these days, the Trump Administrations 2018 defense budget does not include drastic increases in ballistic missile defense spending. This is something that has rattled many lawmakers on Capitol Hill and was the focus of numerous armed services committee members questions over the last two weeks. Increasing foreign demand for these types of defensive systems and cooperative development may help some when it comes to accelerating ballistic missile defense development, more resources from the US Federal Government will be needed as well.

The bottomline is that hit-to-kill ballistic missile defense still has a ways to go to prove itself as truly reliable, and it will take more time and money to get to such a point. And while other systems and concepts, some of them quite exotic, may show promise, the highly deployable Aegis-based layered BMD concept is probably the best investment the Missile Defense Agency can make at this time.