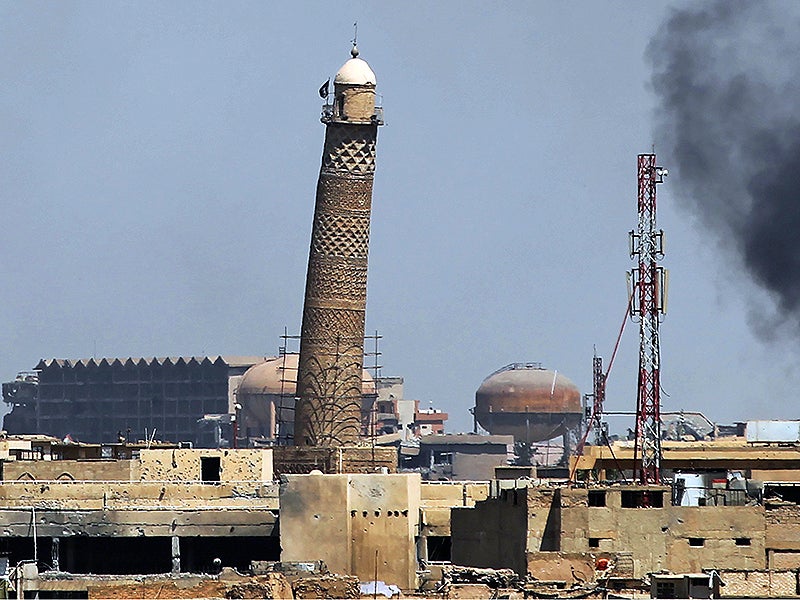 After eight months of terrible horrors and incredible bravery, the end game is upon ISIS in Mosul. As Iraqi security forces tighten the noose around Old Town—the last few districts they have not brought under their control—the final remnants of the terror group's dastardly operation within the sprawling Iraqi metropolis is self destructing, both literally and figuratively.

There has been no greater symbol of the Islamic State's presence in Mosul than the Great Mosque of al Nuri. It is here where the Islamic State's villain supreme, Abu Bakr al Baghdadi, defiantly declared his Caliphate in 2014 after blitzing across western Syria and much of Iraq. It was the terror kingpin's most high profile, and one of his only public appearances, and it was the beginning of a living hell for Mosul, the region, and beyond.

Since then the dark flag of the Islamic State has flown high atop the ancient Mosque's iconic leaning minaret—a symbol of oppression and control for all to see. That is until yesterday.

Iraqi security forces have long seen the Mosque's Minaret as a beacon of hope—a goal just on the horizon that once reached would mean the final liberation of Mosul as a whole. Where it all started is where it would also end so to speak.

But as Iraqi counter-terror forces, both haggard and hardened from months of brutal close quarter fighting throughout the city, finally approached within just 50 yards of the mosque, Islamic State fighters detonated explosives that transformed the ancient structures into a cloud of smoke and rubble.

The al Nuri Mosque wasn't always such a ominous icon, it has stood as a beloved staple of the ancient city's skyline for a whopping 800 years. The big learning minaret is locally known as the Hunchback, or “Al-Hadba.” Times of Israel describes the ancient structure as such:

The “Hadba” was completed in 1172 and had distinctive ornamental bands of brickwork wrapping around its cylindrical shaft. It started listing centuries ago and has long been considered an endangered monument.

The minaret, with its unmistakeable shape, was the symbol of the city and featured in many local shops signs and advertisements. It gave its name to countless restaurants, companies and sports clubs.

When IS imposed its tyrannic brand of sharia, or Islamic law, in the early stages of its “caliphate,” it destroyed several key heritage sites in Mosul, including the main museum and shrines to Jonah and Seth.

It reportedly rigged the “Hadba,” which it sees as the subject of a cult that transgresses its own regressive and ultra-conservative brand of Islam, but had been prevented from blowing it up by the local population.

In June of 2014 the U.N. Educational, Scientific and Cultural Organization had started work with the local government to stabilize and save the tilting minaret. Just a few days later, Mosul was sacked in a surprise offensive by swarming Islamic State fighters.

It really isn't that surprising that Islamic State fighters destroyed the site—pulling off one last miserable deed against the culture and people of Mosul—they have done the same to countless antiquities and historic sites across the territory it has controlled. When it comes to this site though, it seems more of a case of "if we can't have it nobody can."

In the end many thought the chances of saving the mosque were slim at best. Lieutenant General Abdulwahab al-Saadi of Iraq's elite counter-terrorism forces gives his insight as to how the loss of the mosque was probably inevitable:

“The mosque has some symbolism for the terrorist gangs, being the mosque where Abu Bakr al-Baghdadi gave his first sermon... Perhaps they won’t want to leave this place that Abu Bakr al-Baghdadi took to the security forces and maybe they’ll send a message accusing Iraqi units of of destroying them."

800 years of history and and a beloved historic landmark gone with a click of detonator and the twitch of an evil hand.

Below is a map showing all that is left for Iraqi forces, many of which have done an outstanding job under horrific conditions, to take back until Mosul can be declared liberated. Keep in mind that the entire east side of the city, which was liberated first, is not shown in this map. The end to this dark note in Iraq's history could come any day now.

Although the liberation of Mosul would mean that ISIS would no longer hold any major population centers in Iraq, and its claim as a quasi theocratic-governmental entity in country would be shredded, the terror group is still highly active with cells throughout Iraq.

Still, Iraqi security forces, with the help of its US-led coalition partners, as well as Kurdish Peshmerga fighters and Shiite militias, and other factions both internal and external, have accomplished something fairly amazing in Mosul. Above all else, they have finally proven that they can and will stand and fight against a common foe.

Now when that common foe no longer poses and existential threat to the country, that is where the future of Iraq becomes more murky and and geninunly concerning.