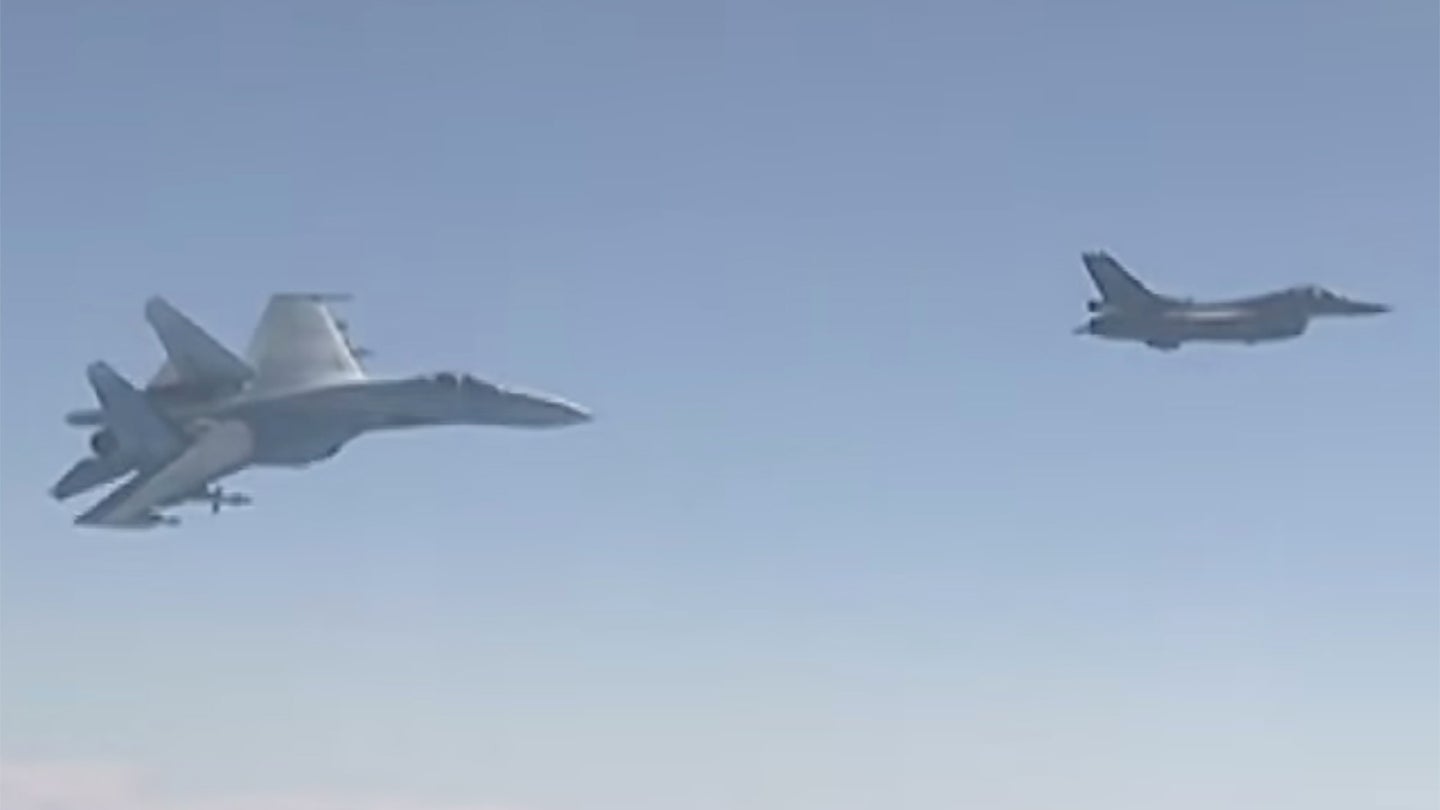 An F-16 Viper has intercepted a Russian aircraft carrying the country’s Defense Minister Sergei Shoigu, briefly escorting the Tu-154 VIP plane as it flew over the Baltic Sea. Soon after, a fully armed Su-27 Flanker zoom in and appeared to warn off the NATO fighter jet. The incident follows a significant uptick in aerial incidents in the region amid a flurry of military maneuvers and cool relations between Moscow and Washington and other NATO members.

The Russian military’s official television channel Zvezda released video of the incident, which occurred on June 21, 2017. At the time of writing, the Russian Defense Ministry has not issued any statement regarding the flight in English. “Russia's Sukhoi Su-27 fighter, one of the aircraft escorting Shoigu's plane, then displayed its weapons, prompting the F-16 to retreat,” according to state-run news outlet Sputnik. Russia’s top officer was en route to the geographically separated enclave of Kaliningrad, which shares land borders NATO members Poland and Lithuania, at the time.

"As the aircraft did not identify themselves or respond to air traffic  control, Nato fighter jets scrambled to identify them, according to  standard procedures," an unnamed NATO official said in a statement according to the BBC. "NATO has no information as to who was on board. We  assess the Russian pilots' behaviour as safe and professional."

Though you can’t see any national markings on the Viper in the video footage, it is likely an F-16C Block 52+ from the Polish Air Force. On May 2, 2017, Poland and Spain took responsibility for the alliance’s rotating Baltic Air Policing mission. However, the Spanish Air Force flies the visually distinct Boeing EF-18A+ Hornet. If it was indeed a Polish jet on patrol, it would likely have been armed, as well.

The intercept is just the latest in a series of encounters between NATO and Russian aircraft, some of which have been more serious. On June 19, 2017, another Flanker reportedly flew within five feet of an RC-135U Combat Sent electronic intelligence aircraft as it passed through international airspace above the Baltic.

U.S. officials told Fox News, who was first to report that incident, that the Russian pilot was acting in a “provocative” manner and moving “erratically” near the much larger and less maneuverable Combat Sent. The Kremlin subsequently blamed the American crew for the unsafe maneuvering. "When being accompanied, the RC-135 plane made an attempt at approaching the Russian fighter jet making a provocative turn towards it," the country’s Defense Ministry said in a statement via state-run outlet TASS.

These were hardly the only instances where NATO and Russian warplanes have met over the Baltic Sea in recent weeks. On June 20, 2017, the Lithuanian Defense Ministry reported that the alliance’s jets had made more than 30 interceptions in the previous week. Russia’s aerial activity included sorties by Su-27s and the advanced Su-34 Fullback derivative, as well as Su-24MR Fencer multi-role aircraft.

In particularly notable incident on June 16, 2017, NATO jets joined together with their counterparts from Finland and Sweden, who aren’t part of the military bloc, to shadow a huge group of Russian planes, which included Flankers, Fullbacks, and Fencers, along with a Tu-160 Blackjack supersonic bomber, A-50 radar plane, and an Il-22 airborne command post. Finnish authorities subsequently released a series of photographs of the Kremlin’s aircraft.

Since Russian forces seized control of Ukraine’s Crimea Peninsula in March 2014 and subsequently began actively supporting separatists battling the government in Kiev, NATO has stepped up activates along its shared border with Russia. This has in turn prompted tit-for-tat responses from Moscow. The Kremlin’s aviators have performed numerous intercepts since then, including others described as unsafe or unprofessional. This increased activity has extended beyond Europe, with a pair of U.S. Air Force F-22s flying out to meet a flight of Su-35 Flanker-E fighter jets and Tu-95MS Bear bombers near Alaska in May 2017.

These latest incidents came as NATO members conducted major naval and ground exercises throughout the Baltics, as well as in Germany and Poland. The Baltic Operations (BALTOPS) maritime training sessions and the Saber Strike war game on land, both included impressive displays of aerial force, including American B-1 Bone and B-52 Stratofortress bombers conducting mock attack runs and mine-laying sorties. On June 9, 2017, the alliance gathered together representative aircraft for an impressive photo op over the Baltic. A Russian Flanker promptly photo bombed the formation in full view of the press.

It’s very likely that these encounters will continue in the coming months, with both Russia and NATO’s continuing a busy exercise schedule. Most notably, approximately 100,000 Russian and Belorussian troops are set to take part in a massive war game along their boundary with NATO this fall. These Zapad exercises happen every four years and pit the two countries against a notional large scale opponent, largely seen as a stand-in for NATO. The name simply means "West" in Russian.

“We are treating these as exercises as such, nothing more, but of course, on the local level, some risks are here,” Lithuanian Defense Minister Raimundas Karoblis said during a visit to the United States to meet with his American counterparts earlier in 2017. “We need to also be prepared for surprises … they could, say, go to a different direction than planned, and there also may be some tests of how the border protection is working, etc.”

This goes beyond NATO, as well. Russia has made a number of veiled threats toward both Finland and Sweden in recent years, as both countries becoming increasingly interested in the collective security of the alliance. If Swedish officials decide to join the military bloc, "we will interpret that as an additional threat for Russia and we will think about how to eliminate this threat," Russian President Vladimir Putin told TASS earlier in June 2017. On the same day in June as Russia's unsafe intercept of the American RC-135U, the Swedish Air Force said one of their signals intelligence aircraft had a similar run-in with a Flanker.

There may also be an additional surge in intercepts as the Kremlin seeks to retaliate indirectly for American activities in Syria. In spite of international condemnation of Syrian dictator Bashar Al Assad and his regime, Moscow has continued to support the leader in exchange for strategic access to the country’s territory, an issue we have discussed in detail in the past. In nearly three weeks, the U.S. military has shot down two Iranian-made Shaheed 129 drones and a Syrian Air Force Su-22 Fitter attack jet. The confrontations have many worried the United States is inching closer to a broader and more dangerous confrontation with the government in Damascus and its Russian and Iranian allies.

In April 2017, following a reported chemical weapons attack on innocent civilians, the U.S. Navy did fire a number of Tomahawk land attack cruise missiles at Syria’s Shayrat Air Base. However, by most accounts, American officials went to great lengths to avoid hitting Russian personnel at the base. After the Su-22 shoot down, Moscow took a hard-line stance, suggesting, at least initially, that it would effectively include Syrian forces under the protective umbrella of its own fighter jets and surface-to-air missiles.

With all this in mind, the Baltic Sea definitely seems like a potential hot spot to keep an eye on, whether the activities are related to what’s going on in Europe or developments further afield.

UPDATE- 8:20am PST 6/22/2017: Apparently Polish Vipers did the intercept yesterday. The confusion came from a archive photo ran by the AP showing the a Dutch F-16 through a airliner cabin window.