Bulgarian firm LASA brings its T-Bird to Le Bourget, but customers might not be thrilled with the company's mercenary connections. 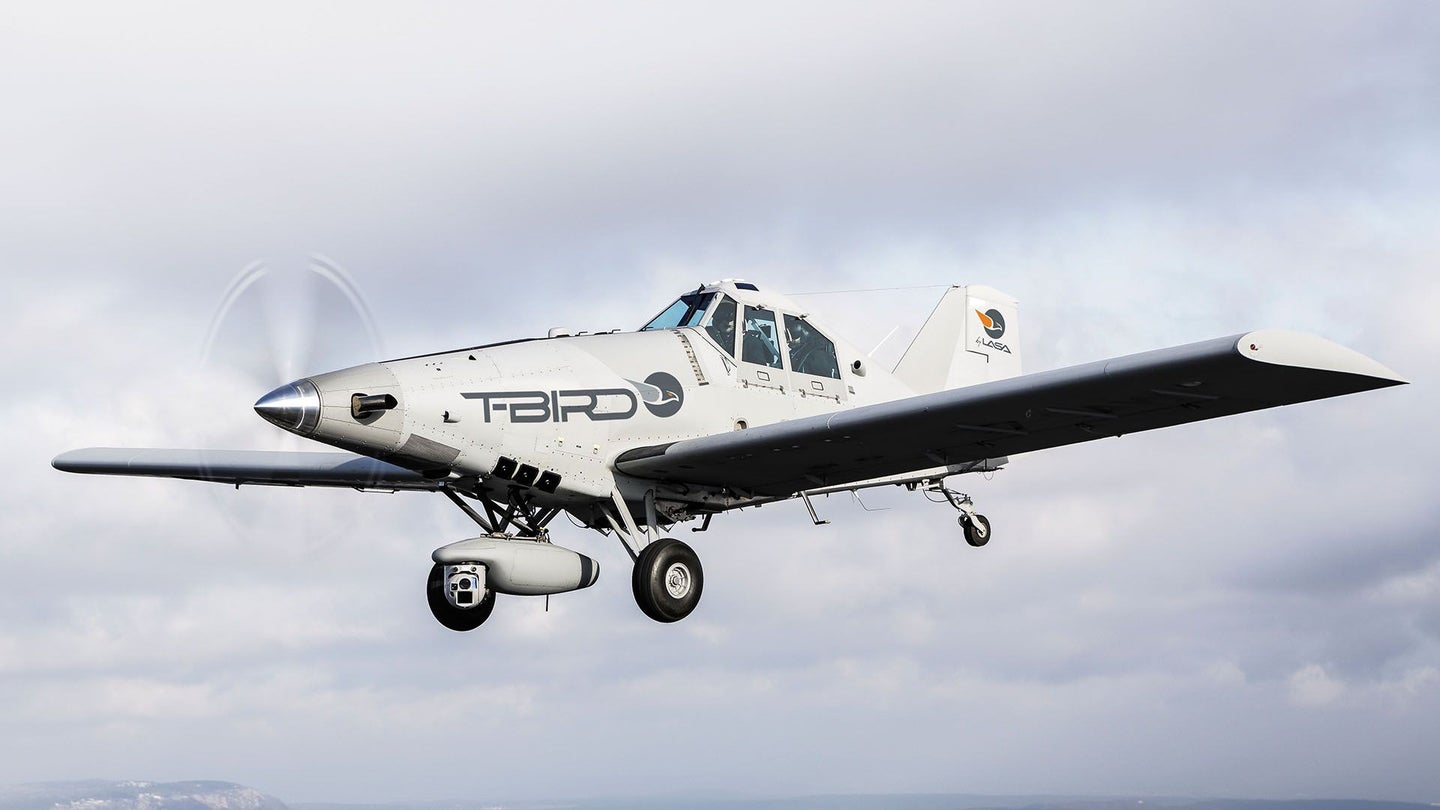 As the market for crop dusters converted into light surveillance and attack aircraft continues to expand, another contender has appeared on the market at the annual Paris Air Show at the French capital city’s Le Bourget Airport. However, potential customers might be turned off by the company’s already sordid reputation, which involves accusations of dubiously legal business practices, potential violations of international embargoes and sanctions, and a connection to infamous mercenary Erik Prince.

On June 19, 2017, the first day of the show, a modified Thrush 510G agricultural aircraft sat out in the sun at Le Bourget. Bulgarian firm LASA Engineering had brought the plane, called the T-Bird, to display at the famous trade show, no doubt hoping to woo buyers looking for a cost effective means of performing tasks such as monitoring borders and conducting internal security missions against insurgents and terrorists.

“If your defence budget doesn't run to an A-10, or even a Super Tucano – you might need this…,” a blog post on the Royal Aeronautic Society’s page covering the Air Show declared. “This year at Le Bourget sees not just one, but two armed agricultural aircraft on display at the show – as militaries around the world look for low-cost attack aircraft to fight insurgencies.”

Thrush Aviation is the current company producing the 510G, which is a low-wing, single-engine turbo-prop intended for crop-dusting and other agricultural work. In that configuration, a pilot would generally fly between 90 to 150 miles per hour, per the firm’s website. It can fly as slow as 55 miles per hour and only needs 1,500 feet to take off when loaded to a gross weight of 10,500 pounds. With its four-blade, variable-pitch propeller in full reverse, it can land in just 350 feet.

These basic attributes make it a great underlying platform for a counter-insurgency-focused light attack and surveillance plane. I’ve written extensively on the history of this concept, which dates back the 1980s when the U.S. State Department – yes, the State Department – bought a fleet of modified Thrushes for the War on Drugs in Latin America from the then manufacturer, Ayres Corporation. Though unarmed, these so-called Narcotics Eradication Delivery System (NEDS) versions had armor plating around vital components and bullet-proof windshields and windows. Ayres and its competitor, Air Tractor, eventually expanded the concept to include armed variants, followed by even more impressive derivatives.

LASA’s version follows a general trend. The aircraft has six underwing pylons for weapons, plus a day and infrared night-vision camera turret mounted under the fuselage. Austrian company Airborne Technologies is responsible for this sensor suite. There is likely armor added to the certain parts of the fuselage and wings and bullet-proof windows around the main cabin.

Notably, at the 2017 Paris Air Show, LASA decided to display their offering with a variety of Soviet-era weapons strapped to the aircraft. The plane had two 16-round UB-16-57 and two 32-round UB-32 rocket pods, both able to fire the 57mm S-5 rocket, plus two UPK-23 gun pods, each with a twin-barrel 23mm cannon inside.

These armament options might be more appealing to certain countries in the Middle East, Central Asia, Africa, and elsewhere that have large stockpiles of Soviet-style weapons and ammunition already on hand and are less concerned with collateral damage. And with other companies in Bulgaria still making many of these products, it would also be easier for LASA to offer a package deal with this armament. Other similar aircraft, such as theAir Tractor AT-802U, the IOMAX Archangel, and L-3’s OA-8 Longsword commonly arrive at trade shows and other events fitted with Western weapons, including precision guided munitions.

But there’s nothing to suggest these firms wouldn’t be able to accommodate a buyer who wanted a version that could handle these older weapons. And anyone looking to buy a plane like this might not be thrilled to be dealing with LASA regardless.

See, if any of the previous details sound familiar, it’s because they should. LASA’s aircraft is almost the exact same configuration as one Airborne Technologies had put together for an “unnamed client” in 2014. That individual turned out to be Erik Prince, a former U.S. Navy SEAL who had gone on to found Blackwater, a private military company that ultimately shut down, with various divisions ending up rebranded or taking on new lives of their own, after a series of controversial incidents and lawsuits. In April 2016, The Intercept published a detailed expose on the entire Thrush affair.

According to various sources and leaked documents, Prince reportedly intended to deliver a fleet of the aircraft to the South Sudanese government in violation of American and other foreign regulations surrounding the transfer of military equipment and training services. After it became clear Austria’s defense export rules would halt his plans, he moved the operation to Bulgaria. There an associate, Zachary Botchev, founded LASA, which stands for Light Armed Surveillance Aircraft, using what appeared to be a bogus address. The company now has an additional facility at Kazanlak Airfield, a grass strip in the center of the country that mainly serves actual crop dusters working in the country's famous Rose Valley, among other areas.

While in Bulgaria, Prince reportedly toured one of the country's premier arms manufacturers, Arsenal, to view its line of aircraft weaponry. Arsenal’s website does not list the UPK-23 or any of the S-5 rockets or rocket pods among its products, so it’s unclear what they would have showed the American military contractor. And despite having the sensor turret, briefing slides show the plan was for pilots to actually aim any main weapons, at least in part, using a EOTech Holosight, a holographic gun sight more commonly found on individual and crew-served firearms.

Frontier Services Group (FSG), an separate “aviation and logistics” company Prince had also founded with the Chinese state-operated investment firm Citic Group in 2014, subsequently registered the first modified plane in San Marino. The small European city state rescinded the registration, T7-SAW, after pictures emerged online showing a military-style aircraft that did not match the civilian description in FSG’s application. As of April 2016, this aircraft was reportedly grounded at an unspecified location in East Africa. Airborne Technologies had moved a second aircraft, almost certainly the one that has now appeared at Le Bourget, to LASA’s facilities in Bulgaria.

In a meeting with FSG executives, Prince reportedly denied any connection to LASA, though he disclosed his relationship with Airborne Technologies. The Chinese-based company told The Intercept that it had no involvement in the project and ‘would not “engage in activities that require U.S. government licenses.”

So, the exact relationship between the two firms remains murky. Both offer armed Thrush 510Gs on their websites and even use some of the same pictures of the aircraft, which appear to be identical except for the branding. LASA says Airborne Technologies supplies the "ISR [intelligence, surveillance, and reconnaissance] equipment and Airborne LINX package." The Bulgarian company offers the Austrian firm's Self Contained Aerial Reconnaissance (SCAR) sensor pod as the TR-Pod. Both can accommodate electro-optical cameras, signals intelligence gear, and radars, among other systems.

LASA’s website does not mention Botchev among its four-person team.  By 2016, Prince was reportedly the subject of numerous U.S. government investigations into his attempts to offer mercenary services to foreign governments, money laundering, and possibly links to Chinese. He has repeatedly denied involvement in any illegal activities and insisted his businesses are legitimate. Since then, the retired special operator and brother of U.S. Secretary of Education Betsy DeVos, has become entangled in the swirling intrigue relating to President Donald Trump’s shadowy links to Russian government officials.

What is clear is that Prince’s armed crop duster is on display at Le Bourget and LASA is open for business, whatever involvement the American still has in the project.