Russia Says Its Future Bombers Will Have Protection From "All Missiles"

It's a dubious boast, but it doesn't mean the country's engineers aren't working on advanced defensive systems. 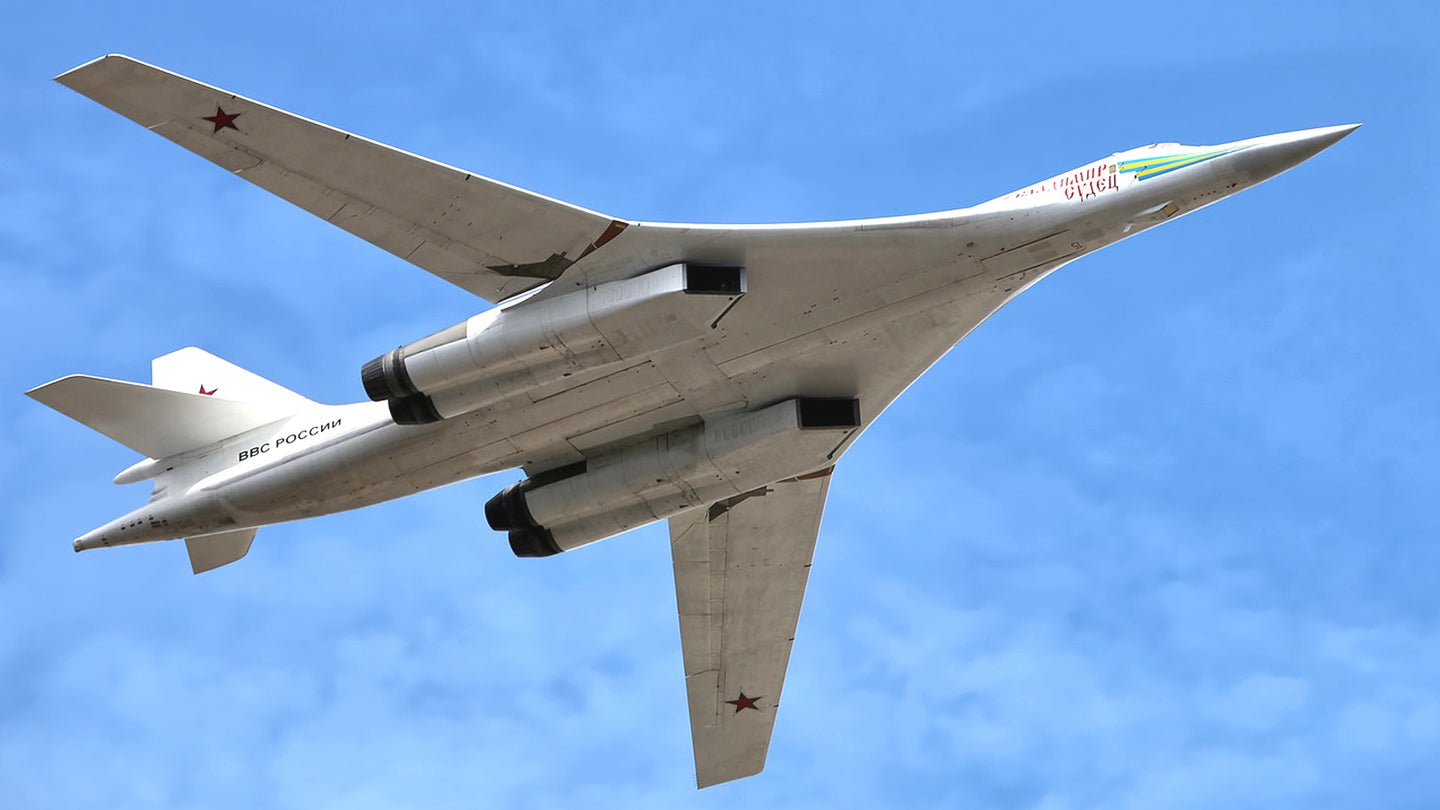 If claims made through Russian state media are to be believed – and one should always view them with a certain amount of skepticism – the country’s upcoming Tu-160M2 Blackjack bomber will have significantly improved defensive countermeasures, as well as updated avionics and mission systems. If the systems do make it into service on the new aircraft, the same equipment, or variants thereof, could make it onto the still-unseen PAK DA long-range bomber.

On June 14, 2017, state-run media outlet TASS ran a story on the topic centered on an interview with Vladimir Mikheyev, the First Deputy CEO of Radio-Electronic Technologies Group, also known as Concern Radio-Electronic Technologies or by its Russian acronym KRET. The state-owned company produces a variety of products for civilian and military applications, including radios, navigation systems, radars, and intelligence gathering equipment.

The Tu-160M2s “will have a principally new defensive aids system which is being developed as part of a new R&D effort,” Mikheyev said. “It will protect against all possible types of missiles. The system will detect targets at a distance of several hundred kilometers.”

The Tu-160, which the Russians call Beliy Lebed or “White Swan,” is the country’s largest bomber and has a top speed, at full afterburner, of over Mach 2. A swing-wing design visually similar to the U.S. Air Force’s B-1 Bone, the four-engine aircraft is more comparable in overall size to the abortive XB-70 Valkyrie. Though the prototype first flew in 1981, the Tu-160 didn’t see combat until 2015, when the Kremlin employed them to attack targets in Syria via cruse missile launches.

In 2014, the Russian military began receiving the first updated Tu-160Ms with improved avionics and mission systems. Now, the Kremlin wants to restart the production line and buy all-new M2 versions with the additional internal updates from firms like KRET, along with new engines and other more significant external modifications to improve fuel efficiency and overall range. As of June 2017, Moscow hoped to get the first of these bombers into service by 2021.

The executive did not offer any additional details on how the new system or systems for the bombers might defeat incoming threats. TASS’ did add a definition for “defense system” that covered detecting and classifying incoming weapons, as well as destroying them. It is possible and perhaps likely that he could have been referring to a completely new suite of equipment that included optical, infrared, and radar-linked early warning sensors along with jamming gear, lasers able to deflect certain types of missiles, and traditional dispensers loaded with flares and chaff.

Many of these types of systems, such as direction infrared countermeasures, already exist, but KRET could improve any or all of them by extending the range at which they first spot possible dangers, as Mikheyev alluded to, as well as how fast and actively defenses respond to the threat. The gear could involve more revolutionary technology, such as electrically-powered solid-state lasers or other systems that actually knock down incoming missiles. Another option might be to use highly focused beams of electromagnetic radiation to confuse or even destroy targeting radars or the seekers inside individual weapons. A conformal active electronically scanned radar (AESA) could do double duty in this role and Russia has already begun flying conformal arrays on their T-50 fighter jet prototypes.

The U.S. military is already working on a number of similar projects, though it remains tight-lipped about most of them. One of the most analogous, at least from what we know, is the Air Force Research Laboratory’s (AFRL) advanced technology demonstration known by the forced acronym SHiELD, which stands for Self-protect High-Energy Laser Demonstrator.

Earlier in 2017, we received briefings through the Freedom of Information Act regarding this and related programs that were heavily redacted and devoid of almost any real detail – we’ve included one of the briefing slides so you can see for yourself. The censored cited a statute, 10 U.S.C. § 130, which specifically exempts information from release if the U.S. government reasonable believes it provides enough detail on a sensitive technology for someone to reverse engineer or similarly use it for their own purposes.

What is clear is that the U.S. Air Force is looking for a podded, turreted laser for aircraft that can shoot down threatening projectiles. Beyond that, it needs to have the necessary equipment project and aim the beam, keep it stable, and make sure everything stays cool enough for multiple shots in a relatively short amount of time, as well as a power source to run all those components. In 2014, an interesting partnership between the Defense Advanced Research Projects Agency, AFRL, Lockheed Martin, and Notre Dame University demonstrated a beam-control turret that fits the description of that part of the system. In 2016, Northrop Grumman received a new contract for development work related to the SHiELD turret. The notional system has become a key component of emerging sixth-generation fighter jet concepts.

As of 2014, the U.S. Navy was also exploring the idea of a less intensive and shorter range Helicopter Active RPG Protection (HARP) program, which would be small enough to potentially fit on smaller aircraft, as well. However, this notional system, which would use a chemical- or kinetic-energy interceptor to blow up small projectiles, wouldn’t work in the high-altitude combat scenario a heavy bomber would be more likely to experience.

Regardless, with various countries working on stealth technology and hypersonic and highly maneuverable air-to-air and surface-to-air missiles, the crew of a non-stealthy bomber might have little time to react and no ability to dodge threats. As such, an active, fast-cueing, and likely automated defense system might be vital to survival in a future conflict.

Similar considerations seem to have gone into KRET’s plans for the Tu-160M2’s new navigation equipment. Mikheyev described a combination of gear that would allow crews to continue the mission even if one or more systems were damaged or otherwise unusable.

“In this area, the requirements for navigation are changed completely,” he explained to TASS. “In this sense, everything will be principally new. The aircraft will feature a strapdown inertial navigation system, a new astronavigation system and a whole number of instruments, including a new satellite navigation system.”

Though the satellite navigation system – likely linked to Russia’s GLONASS GPS-equivalent satellite network – would no doubt be a welcome improvement, the astronavigation equipment is the more notable item. The idea of a modern bomber crew using the stars to plot their position and course is nothing to laugh at. If an enemy force begins attacking space-based systems during a conflict, aircraft without a reliable backup system might find themselves effectively flying blind. Since Russia is steadily developing its own anti-satellite arsenal, one would imagine its military is especially aware of the increasingly real threat. KRET’s deputy head isn’t talking about a navigator with a manual sextant, either. The company makes advanced electronic star-scanning systems that can do the work automatically. The U.S. Air Force's now retired SR-71 spy plane had a similar system and B-2 bombers, among other aircraft, still do, for the same reasons.

All of these systems could be just as useful on the future PAK DA, depending on its final design. Fan art and animations of the proposed aircraft depicts a variety of the advanced shapes, but a blended wing, subsonic design seems most likely. However, despite nearly a decade of reports, to date Tupolev hasn’t released any official art, let alone pictures of a mockup or prototype.  If Russia's low observable (stealth) technology cannot defeat a wide variety of radar bands, not to mention infrared sensors, these types of defensive systems may be especially critical for this new bomber. In fact, Russia's focus on these defensive measures might actually be a tacit admission that their own work on aircraft with low-observable features and high-end data fusion and sensor technology, aimed to enhance survivability and the aircrew's overall situational awareness while in combat, might be lagging far behind that of its potential opponents.

It’s also worth noting that many advanced defensive electronic warfare systems can double as offensive weapons, able to actively scramble communications or radar receivers. In addition, the sensors scoop up much of the same information as electronic intelligence arrays, giving them another potential role. The War Zone has highlighted these features with regards to the combination of the F-35 Joint Strike Fighter’s electro-optical targeting system, distributed aperture system – which already helps cue defensive gear to incoming missiles – and especially its radar and super-sensitive electronic surveillance equipment. In theory, this could make the jets a powerful intelligence collector and, with the help of advanced data links, push that information out to other aircraft or forces on the ground.

Of course, as always with Russian military modernization programs, there is an inherent cost factor. Between the country’s flagging economy and sanctions over its foreign military interventions and attempts to influence foreign government and political systems, the Kremlin has repeatedly found itself strapped for cash and has already had to delay major procurement programs indefinitely to free up funds for other priorities. The country may just have a lot of catching up to do in general. For instance, Russia's President S directional infrared countermeasures system, which is similar in size, if not more ungainly, to first generation American systems, only appeared in the late 2000s and seems to be just hitting the battlefield now.

However, new and upgraded aircraft remain high on Moscow’s wish list and the kind of systems Mikheyev alluded to are much more realistic than some of other reports that come out of Russia’s state-operated media outlets. According to TASS, Russian Deputy Defense Minister Yuri Borisov explained that developing systems that would ultimately go into both the Tu-160M2 and PAK DA would help save money, too. Its always possible some of the equipment could end up on other existing bombers, such as the Tu-22M Backfire or the Tu-95 and -142 Bears.

If the Kremlin does intend to follow through with its plan to start making Tu-160M2s within four years, we should find out soon enough if KRET is working serious on these systems or not.