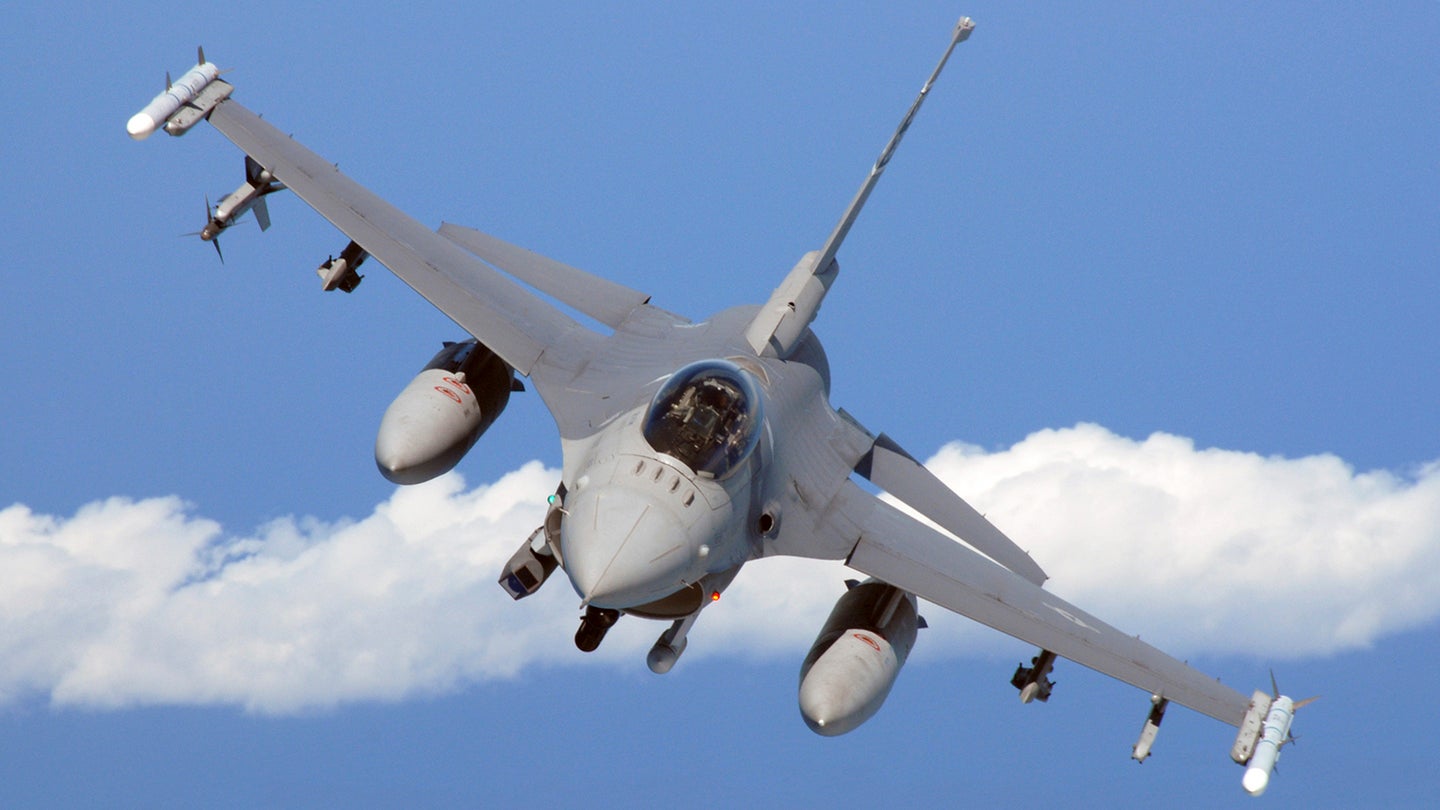 The U.S. Air Force is looking to extend the life of hundreds of F-16C/D Vipers, even more than we previously reported. At the same time, the U.S. Navy seems to have come to a similar conclusion with plans to buy more and better F/A-18E/F Super Hornet derivatives. Suffice it to say that the 4th generation fighter will be alive and well within the Pentagon's inventory for a long, long time to come.

On June 12, 2017, the Air Force Life Cycle Management Center (AFLCMC) posted a presolictation notice on the U.S. government’s main contracting website, FedBizOpps regarding production of upgrade kits for the service’s F-16 Service Life Extension Program (SLEP). The latest announcement on the project, now more than three years in the making, has the service pushing the maximum equivalent flight hours for up to 841 Block 40/42 and 50/52 F-16C/D aircraft to more than 13,800 hours in total. The F-16C/D's original life expectancy was 8,000 hours.

“The F-16 USAF SLEP intends to extend the aircrafts current structural service life from 8,000 equivalent flight hours (EFH) up to 13,856 EFH by modifying and/or repairing life limiting, fractural critical, and safety of flight critical structure,” the notice explained. “This effort seeks to award a contract to a vendor who can manufacture and/or procure, assemble, and deliver up to the estimated maximum quantity of 841 F-16 Block 40-52, C/D-Model SLEP modification kits necessary to extend the structural service life of these aircraft, in accordance with Government standards and specifications defined in the Technical Data Package.”

This is a dramatic increase over the previous announcement in April, where Lockheed and the Air Force said they expected to overhaul just 340 aircraft – 300 F-16Cs and another 40 F-16Ds, with all of the latter going straight to allies – and added only 4,000 hours of life to the airframes. An earlier draft proposal AFLCMC released in December 2016 did specify upgrade packages that could provide up to 6,000 additional fight hours. The Air Force estimated value of the contract would be no more than $403 million in total. However, the final details are still subject to change and its not clear how many, if any, of the planned kits would be destined for foreign air forces.

Of course, while the SLEP will keep these jets flying safely, it’s not necessary enough to keep them competitive against a near-peer opponent and be useful supplement to the advanced, stealthy F-35A Joint Strike Fighter. Most importantly, the Air Force’s F-16 fleet is in desperate need of new radars to maintain its combat edge, even when compared to other fourth generation fighters, such as the service’s own F-15C Eagle.

However, the Air Force is already pursuing just such as an upgrade program on behalf of the Air National Guard and its Vipers. On June 7, 2017, Northrop Grumman announced it had received a contract to add its AN/APG-83 Scalable Agile Beam Radar (SABR), an active electronically-scanned array (AESA) type, to 72 Guard F-16s in order “to meet a U.S. Northern Command Joint Emergent Operational Need for homeland defense.”

“AESA radar upgrades are critically important to give the F-16 community, the tactical advantage it deserves, and we are honored to provide this differentiating technology for the safety and mission effectiveness of our warfighters,” Bob Gough, the Vice President of Northrop Grumman’s Combat Avionics Systems division, said in a statement. “The APG-83 SABR system is in full rate production and available now for U.S. and international F-16 upgrades.”

The SABR is already a key component of the F-16V, an upgrade package that Lockheed Martin offers to existing Viper operators, as well as the F-16 Block 70, which the company is offering on the export market. On top of that radar, the V model modifications include new avionics and mission systems, while the Block 70 includes similar improvements. Taiwan has already contracted with Lockheed to convert its existing F-16A/B aircraft into new V versions, while the Maryland headquartered firm has entered the Block 70 into India’s latest fighter competition.

If the Air Force decides to combine the APG-83 upgrade with the SLEP, it could potentially doom the F-15C/D fleet. In March 2017, the service revealed it was studying the potential positive and negative impacts of retiring all of these Eagles, but the details of its budget request for the 2018 fiscal year indicated the plan was at least on hold.

The budget proposal includes $7 million to replace the longerons on some of the Eagles, which could extend their service life into the 2030s. It's not entirely clear how many aircraft this funding would cover. In an interview with FlightGlobal, Steve Parker, Boeing's Vice President for F-15 programs, seemed to suggest that it would cost about $1  per aircraft, meaning that this funding would let the Air Force overhaul less than 10 jets out of a fleet of nearly 180 aircraft.  Regardless, this does nothing to address the more serious and potentially expensive issue of refitting the F-15C/D’s main fuselage section, wings, and other components, which might require between $30 and $40 million per aircraft. Still, Boeing says this is a worst case scenario and the aircraft may need far less costly structural work to remain in the air for decades to come.

If the Air Force’s optimistic estimates for F-16 SLEP package are accurate – and there is no guarantee that they are or will be forever – the price tag of each upgrade kit is less than $500,000. How much more it might take to actually install the parts is unclear. But it seems likely that overhauling the Vipers would still be substantially less costly, something which the service might find hard to ignore in any final debate over the future of the Eagles. Regardless, with more than 800 upgraded legacy fighter jets, the Air Force looks increasingly set to abandon its overly ambitious plans to buy more than 1,700 Joint Strike Fighter.

The Navy, which expects to buy a relatively small number of F-35Cs, is also pushing ahead with plans to upgrade and even expand its fleet of fourth-generation fighter jets. The service’s fiscal year 2018 budget request includes more than $87 million for a SLEP for existing F/A-18E/F Super Hornets and EA-18G Growler jamming aircraft, plus millions more for other modifications across the Super Hornet fleet. The Navy reportedly plans to ultimately upgrade at least some of its existing Super Hornets with elements of Boeing's new, so-called Block III Super Hornet configuration.

Boeing first proposed similar modifications in 2008, calling the version the Advanced, or Block III Super Hornet. The package includes a new heads up display, as well as improved avionics and mission systems, including a new Distributed Targeting Processor Network computer. The plan will also add Tactical Targeting Network Technology data links to help pilots share and receive more and better information about the battlefield around them. In addition, the improvement program will add Conformal Fuel Tanks (CFT), to extend the aircraft’s range without impairing its overall performance. Enhanced performance GE-F414 engines with roughly 20 perfect more thrust are also optional, as is an enclosed, stealthy, ventral weapons pod.

The add-ons may have a secondary benefit of reducing the aircraft’s radar signature and there’s talk of adding a radar-absorbing coating, too. The Navy says a unspecified portion of these upgrades will filter down to the EA-18G, too. Separately, it is planning to add infra-red search and tracking technology to the Super Hornets so pilots have another tool on top of their radars to help detect opponents.

On top of that, the Navy wants to buy at least 80 all-new Super Hornets, likely in the Block III configuration, in order to make up a growing fighter jet shortfall, especially as older F/A-18C/D Hornet aircraft simply age out. But the service is unlikely to be interested in letting things get as bad as they have in the Marine Corps. The Marine Hornet fleet has become increasingly unsustainable, with the Corps raiding the Boneyard and even a museum for aircraft and spare parts in order to keep an adequate number of jets mission ready in the past. Still, the USMC says roughly 70 percent of their Hornet force cannot fly at any given time.

These purchases will cost the Navy an estimated $7 billion plus over a span of five years, which is great news for Boeing's struggling Super Hornet production line in St. Louis. With the new aircraft, upgrades, and depot-level refurbishment, the Navy expects the Super Hornet Fleet to remain combat ready into the 2040s.

All in all, though the Air Force, Navy, and Marines remain committed to the Joint Strike Fighter program, the Pentagon seems to be finally coming around to the idea—or maybe the fiscal reality—that there is still a place in America’s future fighter fleets for upgraded fourth generation aircraft.