You can think of the defunct YAL-1 as the "analogue" version of the Airborne Laser concept, with an unmanned high-flying drone sporting a solid state laser being the digital version. 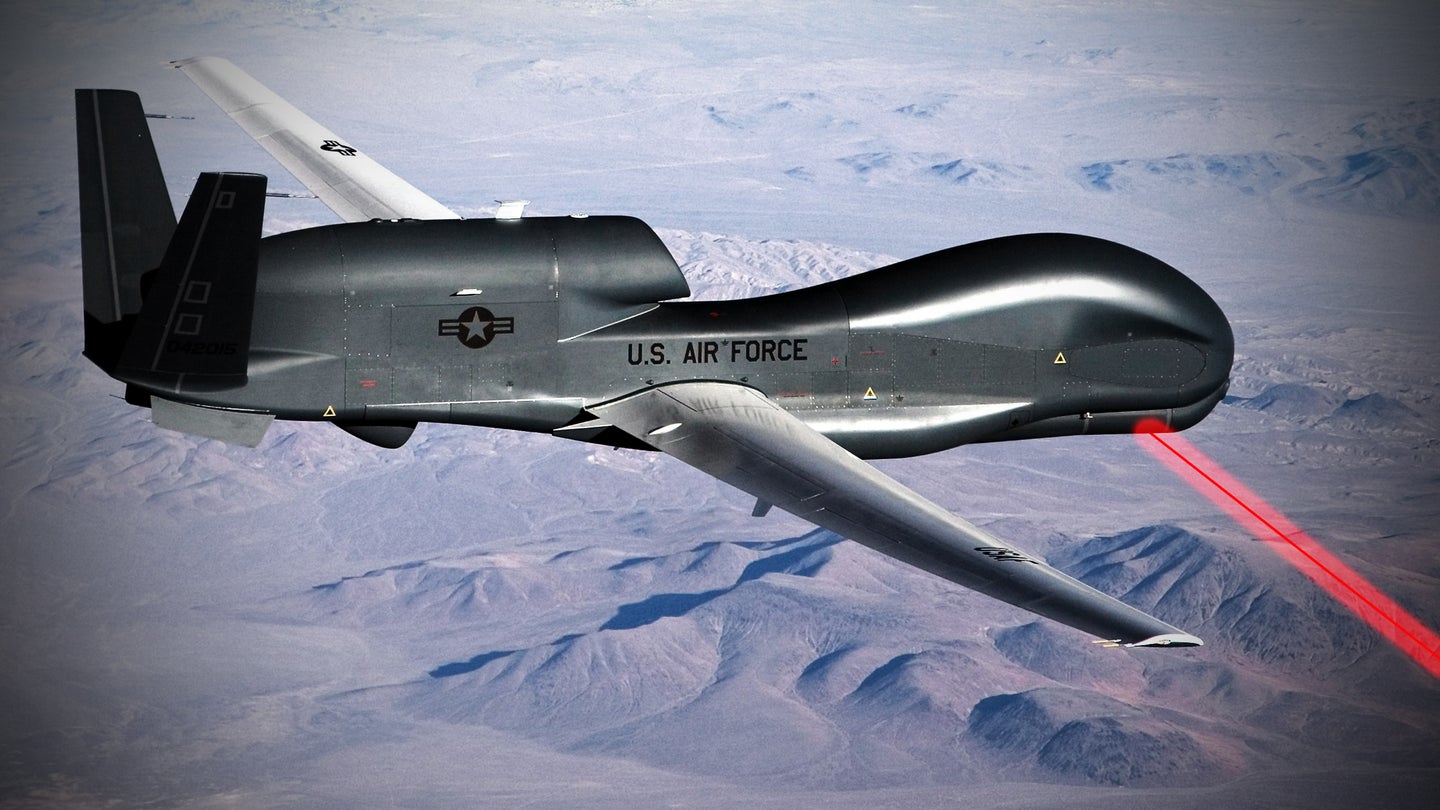 It was one of the most awesome failures of the 2000s. The giant 747-400-based YAL-1 Airborne Laser sure looked the part of a future weapon system, but in the end it was a miserable and money chugging failure. In all, the program took a decade and half—add another decade more if you count earlier test platforms—and over $5 billion to develop, with very little readily applicable war fighting capability to show for it. By the time the jet was retired in 2011, it could indeed shoot down ballistic missiles during their boost phase, but at far too short of ranges and under too narrow of conditions to make the system combat effective. But now the Missile Defense Agency (MDA) wants a second go at the concept—this time leveraging recent and undeniably major advances in solid-state laser technology and unmanned aircraft systems that could very well see the concept finally come of age.

The YAL-1 used a huge, complex, fuel-hungry chemical oxygen iodine laser (COIL) to do its missile murdering business. The size of a 747-400 was required to house the huge complex system and all its chemicals, and even then the YAL-1 could only provide about 20 full power shots on a single sortie. Operationally, there were issues as well. A fleet of AL-1s would have been extremely expensive to procure and operate. Especially when providing continuous coverage of an enemy area. Secretary of Defense Bob Gates, who was adamant about cancelling the YAL-1 program, said that a fleet 10 to 20 AL-1s, would cost a billion and a half dollars apiece, and each would demand $100 million a year to operate. Gates concluded before the budget axe fell on the program that "there's nobody in uniform that I know who believes that this is a workable concept."

Even if such a AL-1 force was fielded, enemy countries could just move their ballistic missiles beyond the relatively short range of the AL-1's laser. Also, it was pretty clear how to defeat such a system overall. Just shooting down the Airborne Laser before a surprise launch would negate its capability entirely, and a 747 flying continuous figure-eight patters along an enemy's border is not a hard to target to acquire to say the least. As such, operational AL-1s would have required constant fighter coverage and electronic jamming and even suppression of enemy air defenses (SEAD) support. The whole concept was simply unrealistic, but using a flying laser of some type to solve the boost-phase intercept challenge still seemed like the only way to go.

Between the YAL-1's short life and today there have been major leaps in directed energy. Much smaller and lighter solid-state laser technologies that use electricity instead of chemicals for energy are all the rage in the defense worlds. In fact, the strides made in the solid state laser space are so profound that arming not just ground vehicles, but combat aircraft, such as gunships, high-performance fighters and attack helicopters, with highly dynamic tactic laser systems are very much concepts under development and testing today. At the same time, unmanned aircraft technologies have continued to evolve, as have the optical and radar payloads they are capable of carrying over or near the battlefield. The high-altitude, long-endurance (HALE) RQ-4 Global Hawk in particular has finally come into its own as an operational intelligence gathering system that can rival its manned competitor, the U-2 Dragon Lady.

These two technologies, specifically HALE unmanned aircraft and solid state lasers, are what the Missile Defense Agency wants to combine into a Airborne Laser 2.0 of sorts—a networked system capable of loitering very high over or near enemy airspace, ready to knock down theatre ballistic missiles, and possibly even fast-flying ICBMs, during their most vulnerable phase of the flight. This of course is the missile's boost phase, when it ascends at its lowest flying speeds atop a bright plume of hot gas.

Using a HALE platform, based around a semi-autonomous concept of operations, would be much more affordable to fly for long periods than a quad-engined 747, and its magazine depth would only be limited by the amount of electricity it can generate. Also, it would operate roughly 20,000 feet higher than the YAL-1 could, giving it much longer lines-of-sight and lower beam distortion through a thinner atmosphere, but also the ability to fly above the vast majority of weather. This would also help its infrared tracking systems acquire its targets at greater range.

In a business solicitation posted over at FedBizOpps.gov on June 13th, the Missile Defense Agency clearly defines the criteria for a test system they want to field in the near future based around this very concept. The posting reads:

The Missile Defense Agency (MDA) Advanced Technology Directorate is interested in industry's capability to provide a High Altitude Long Endurance (HALE) unmanned aircraft in the 2023 timeframe.  A HALE aircraft with greater payload capacity is needed to carry a high energy laser system payload to high altitudes to mature Boost Phase Intercept (BPI).  The results of this RFI will inform future program options for maturing BPI technology and capability following the current Low Power Laser Demonstrator (LPLD) effort. Proposed aircraft should be able to maintain continuous positive ground control and are expected to operate from the Pacific Missile Range Facility in Hawaii and Edwards AFB in California.  Unmanned platforms are highly desired; however, manned concepts will be considered with appropriate justification.

In parallel with ongoing BPI technology maturation and demonstration projects, BMDS capability requirements for an airborne high energy laser BPI capability are being developed.  Based on analysis to date, Paragraph 2.a below describes the ideal platform characteristics to enable robust BPI capability.  MDA is interested in far-term platform approaches to meet the full performance of Paragraph 2.a and mid-term solutions that demonstrate significant progress toward achieving these performance parameters.  Concepts that do not meet these parameters are requested to include future options for improving performance, where applicable.

Under this BAA/RFI, multiple White Papers and/or proposals at differing levels of capability and/or risk are acceptable.  Contractors are encouraged to include information on alternate uses and potential commercialization for proposed aircraft designs along with potential Government and/or non-Government co-sponsors.  Areas such as cost, life-cycle affordability, and further commercialization will be important considerations in evaluating future concepts and for any forthcoming acquisitions.

• Flight endurance of greater than 36 hrs on-station (plus flight time for notional 3,000 km transit to station)

• Flight cruise speed of less than Mach 0.45 at on-station altitude

• Low vibration at altitude: angular displacements of less than 50 µrad

At first glance, these requirements look most suited for the Q-4 Global Hawk, or more specifically an enhanced performance derivative of it. By using this aircraft, it would offer the MDA as close to an "off the shelf" and proven HALE solution as any. One that is also already in service—a fact that could help see such a capability turn from experimental to operational with minimal timelines and expenditure.

There is also the possibility that a firm like Scaled Composites could offer an updated and unmanned aircraft based on their successful manned Proteus aircraft. Proteus worked as a testbed for many high-altitude sensors—including those found on the Global Hawk family of aircraft today. The company has scaled up the design multiple times, in one case drastically, for space-faring projects.

On the other hand, in an operational form, a penetrating HALE capability would be ideal as it could allow for such a laser system to get closer to its potential targets during a time of conflict or heightened tensions.

Lockheed has pushed the USAF on its unmanned "TR-X" HALE concept that has low observable features and uses many of U-2 Dragon Lady's components. Originally this aircraft was to be an alternative option to unseat the RQ-4, and in doing so, keeping Lockheed's lock on a mission set they have owned since the dawn of the jet age. But this same concept could be adapted to the Missile Defense Agency's needs, and if the U-2 were to be retired in the coming decade, which is very possible, the MDA could likely obtain these surplus aircraft and transform them for their needs around a TR-X like configuration. Doing so could save money and lower risk compared to fielding a "clean sheet" design.

In the meantime, a single U-2S could be converted for the test initiative and the aircraft already has a superior altitude and payload hauling capability compared to the RQ-4. The Skunk Works has also already looked at making an optionally manned U-2 variant. This could act as a bridge between a test program's optionally manned or unmanned U-2S and a full-on reconfigured TR-X like operational fleet down the road.

Maybe most enticing, at least for an end-game platform solution, would be the USAF's secretive HALE stealth flying wing aircraft dubbed the RQ-180. The existence of this Northrop Grumman aircraft, which is loosely akin to the high-flying strategic reconnaissance counterpart to the medium-altitude and far smaller, but also stealthy, tactical reconnaissance oriented RQ-170 Sentinel, has been all but outright confirmed by the USAF. It is likely in service today in very small numbers. The difference between it and all the other options discussed here is that its high degree of low observability, both on the radio and infrared spectrum, and its extreme operating altitudes, allow it to penetrate and loiter deep over enemy airspace while remaining undetected for long periods of time.

Adapting such a platform for the MDA's boost-phase intercept mission would be attractive as the system could make the best of today's limited laser power and range by being able to get closer to its potential targets. It would also be able to provide far better area coverage than a standoff system that has to fly along a border. Additionally, fielding such a system on an RQ-180-like platform makes it far more survivable during a time of conflict and it could even be potentially used against enemy aircraft operating over their own territory.

By all accounts, the RQ-180, or whatever its official name may be, is still a highly compartmentalized program, so the idea that the MDA would be able to integrate an experimental laser with it at this early stage is highly doubtful, unless this is also done under a cloak of secrecy. But eventually, migrating this type of capability to specifically this type of aerial asset is likely where the MDA's laser technology will end up.

Whatever the MDA ends up with for their HALE platform, it sounds like they are  on an exciting track to realizing it. Boost-phase intercept/kill has always been the "holy grail" of missile defense. Being able to shower your enemy with the remnants of their own ballistic missiles is a strong strategic deterrent. When mixed with existing midcourse intercept (SM-3 and the ground-based missile defense interceptors) and terminal intercept (THAAD, Patriot PAC-3, SM-6) capabilities, it would complete an "end-to-end" series of missile defense layers that could be deployed regionally against rogue states.

Such a system could be especially useful today, as it would provide a capability of knocking down Kim Jong Un's test missiles before valuable flight test data can be gained, and even if the missiles are shot at steep trajectories over North Korea's own territory. It could also allow for such an engagement to take place without actually firing any sort of projectile at the missile itself.

So after many decades of development, it looks like the Airborne Laser concept may finally be coming of age. And don't be surprised if these "Airborne Laser 2.0" drones become a constantly airborne fixture over the world's most troublesome hotspots.