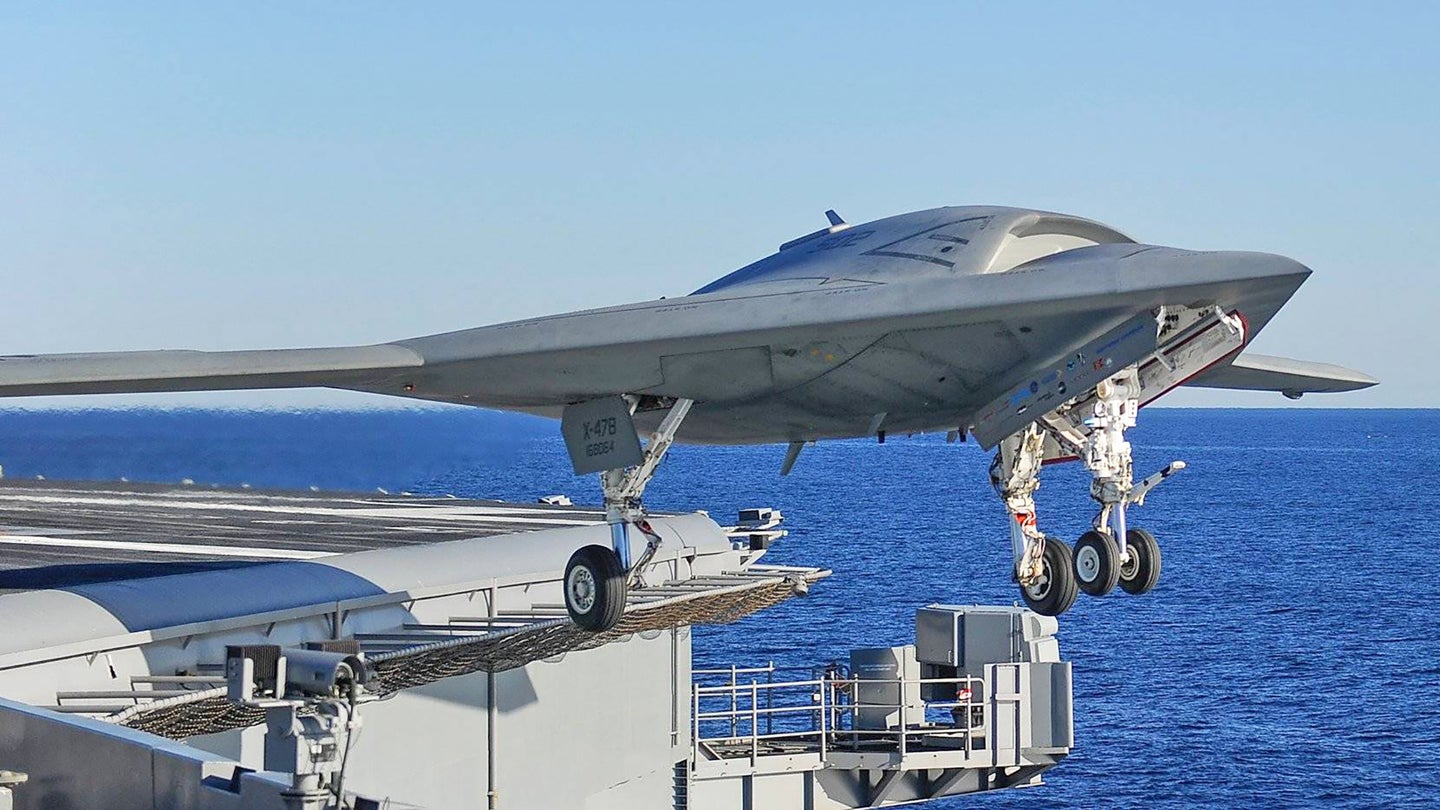 The U.S. Navy has disclosed plans to modify two carriers as part of the service’s MQ-25 Stingray drone program.  These ships will be the first to receive the upgrades necessary to control the unmanned aircraft, which will eventually become a component of all carrier air wings. Just what the drones will do once they reach the fleet is another matter entirely.

Contractors will install control stations and data links for the Stingrays first on the Nimitz-class USS Dwight D. Eisenhower and USS George H.W. Bush, Jamie Cosgrove, a spokeswoman for Naval Air Systems Command (NAVAIR), told USNI News, according to a June 12, 2017 report. There was no word as to when the Navy expected to start that work, what the timeline would be for installing the equipment on the rest of the Nimitz-class carriers, or whether the gear would be standard on the up-coming Ford-class ships.

“MQ-25 Stingray will pioneer the integration of manned and unmanned operations, demonstrate mature complex sea-based ... technologies, and pave the way for future multifaceted multi-mission UAS [unmanned aircraft systems] to pace emergent threats,” the Navy said in a review of the highlights from its budget proposal for the 2018 fiscal year. “FY 2018 will continue work that was begun under UCLASS [Unmanned Carrier-Launched Airborne Surveillance and Strike] and leverage previous work completed, focusing on the three segment areas: air, control system and connectivity, and carrier development.”

According to NAVAIR, the modifications to Eisenhower and Bush fall under the “connectivity” and “carrier development” portions of the program. To help pay for the changes, with Congressional approval, the Navy shifted $26.7 million in funding the service had previously set aside for a planned 4-year refueling and complex overhaul (RCOH) for their sister ship the USS George Washington. The Pentagon’s fiscal year 2018 budget request included approximately $222 million for general research and development of the MQ-25A aircraft itself.

The expectation is that the experience with the previous Unmanned Carrier-Launched Airborne Surveillance and Strike (UCLASS) project and the experimental X-47B unmanned aircraft will make these portions, or at least certain elements within them, relatively simple. While the exact final design of the aircraft, or even its basic configuration, remains almost entirely unknown, the control systems and connections necessary to launch, operate, and land a drone of this size are not. The control station for the Stingray will most likely be the notional MD-5A, which the Navy has had in the works for years already.

In its formal request for the control station's nomenclature in 2014, the Navy described the carrier version of the UCLASS Mission Control System, or CVN UMCS, as a line-of-sight and beyond-line-of-sight control setup using a “integrated Government-Off-The-Shelf (GOTS) solution” including the Common Display System (CDS), Remote Common Electronics Module (RCEM), and Common Processing Systems (CPS), as the key hardware components. The system would use the Common Control System (CCS) software suite for unmanned aerial systems, as well as gear to connect all of these systems to the carriers existing computer networks. The 2016 request for what became the MQ-25 designation also mentioned the aircraft’s data links would be compatible with the Distributed Common Ground Station-Navy intelligence production and sharing network as part of continued plans for a limited surveillance mission. The author previously obtained both of these documents via the Freedom of Information Act.

Beyond those parameters, the Navy may actually already have a pretty good idea of the size constraints and any signal interference issues of installing the control systems, which would be some of the bigger considerations. Bush previously hosted Northrop Grumman’s X-47B during a series of at-sea flight tests. The ship was responsible for the first ever catapult launch of a drone on May 14, 2013. The next month, the vessel recovered the drone in the first ever arrested landing by an unmanned aircraft. Afterwards, the USS Theodore Roosevelt took over as the flight test ship.

Earlier in 2013, Navy officials had sent the X-47B out to the USS Harry S. Truman, but just to see whether it would be compatible with the Nimitz-class’ hangar bays, aircraft elevators, and existing communication systems. With so many transmissions already going in and out of an aircraft carrier, it was important to see if the pilotless plane’s systems would be confused by that, interfere with the workings of other systems, or both.

The sheer volume of radio and radar emissions on warships means that the Navy has to be especially conscious of the potential hazards, which even include accidentally setting off electrical fuzes inside bombs and missiles. As such, the service relies on munitions with features deemed Hazards of Electromagnetic Radiation to Ordnance (HERO) “safe” in order to prevent potentially deadly incidents.

It’s also worth noting that when the Navy decided to in 2016 to change the Stingray’s planned mission set, from strike and intelligence duties to acting as a recovery tanker with a secondary surveillance function, it only requested a new designation – MQ-25A rather than the previous RAQ-25A moniker – for the future aircraft, not the control stations. The requirements for the MD-5 series remained conceptually unchanged. It’s unclear whether the future MQ-25 with its new functions will ultimately make use of the previously proposed shore-based MD-5B or mobile, land-based MD-5C. The MD-5A will likely continue to be the nomenclature for the carrier-specific system workers install on Eisenhower and Bush.

Unfortunately, The actual design and ultimate operational concept for the Stingray will undoubtedly continue to be the more complicated portion of the program, which now appears to be simply called Unmanned Carrier Aviation (UCA). When the Navy fundamentally changed the UCLASS' proposed function in 2016, it initially referred to the refocused aerial tanker drone program as the Carrier-Borne Aerial Refueling System (C-BARS). On April 23, 2017, the service announced it had awarded contract modifications worth more than $18 million each to Boeing, General Atomics, Lockheed Martin, and Northrop Grumman, for additional design work on their MQ-25 proposals.

So far, only Lockheed Martin has released any artwork specifically associated with the project, showing only an under-wing probe-and-drogue tanking pod, similar in size and shape to existing buddy-tanking pods the Navy has already had in service for years. The designs the four companies had initially proposed for the UCLASS program – Boeing's Phantom Ray, General Atomics' Sea Avenger, Lockheed Martin's Sea Ghost, and Northrop Grumman's X-47C –  all had low-observable shapes and features based around the idea of strike and intelligence missions in an so-called "anti-access/area-denial" (A2/AD) environment, which may no longer be necessary for an unmanned aircraft that the service now expects will mainly orbit near the carrier itself.

"The Navy came out with these requirements perhaps in the last six to eight months, and they still haven’t given us the final system requirements document – that should be coming any day – with specifically what they want this tanker to do," Rob Weiss, head of Lockheed's Skunk Works advanced projects office, which was responsible for the Sea Ghost design, to USNI in March 2017. "From our viewpoint, the requirements, as they are currently unfolding, are going to require a new design from all of the competitors."

The War Zone’s Tyler Rogoway has already written in detail about the U.S. military's progress on unmanned combat air vehicles (UCAV) in general, as well as the issues involved in the Navy’s decision to pursue a pilotless tanker rather than its more ambitious earlier proposal for a stealthy unmanned attacker and spy that could potentially penetrate deep into enemy territory for networked "swarming" strikes and persistent surveillance of denied areas. In April 2017, he specifically wrote the following as part of a series of recommendations for how American’s naval arm might restructure its priorities:

The Navy was supposed to field an advanced UCAV (Unmanned Combat Air Vehicle) for its carriers by the end of decade. Strangely that requirement has been dumbed down into a sensor and refueling platform once dubbed Carrier-Borne Aerial Refueling System, or C-BARS. Now the Navy calls it a MQ-25 Stingray, but what it isn't is a stealthy, hard hitting, penetrating UCAV that it could have been.

The terrible decision to go for a drone tanker and sensor platform over a UCAV – that could have done both roles as well as many others – was likely the result of a cultural override by the Navy that historically protects the fighter pilot as a concept, as well as a move to protect high priority (and highly lucrative) manned fighter programs like the F-35C, and even the Super Hornet to some extent. These aircraft could quickly become far less relevant once the UCAV genie is let out of its bottle. But tanking and orbiting around collecting information, that unglamorous role can be done by the drone without putting the fighter cadre at risk.

An unnamed Navy spokesperson told USNI News that the program was still too “pre-decision” to even speculate on when a production aircraft might actually be combat ready. Other sources told them that the service hoped to introduce the MQ-25 into carrier air wings sometime between 2019 and 2020.

So, even if the design for the control stations and data links remain relatively consistent, the very concept of the MQ-25 itself may change radically as the research and engineering development stages continue and the Navy’s priorities continue to evolve. In a world full of evolving threats in space, hypersonic weapons, and other advanced challenges, the Stingray could easily experience more fundamental changes in both design and overall purpose before it finally reaches the fleet.