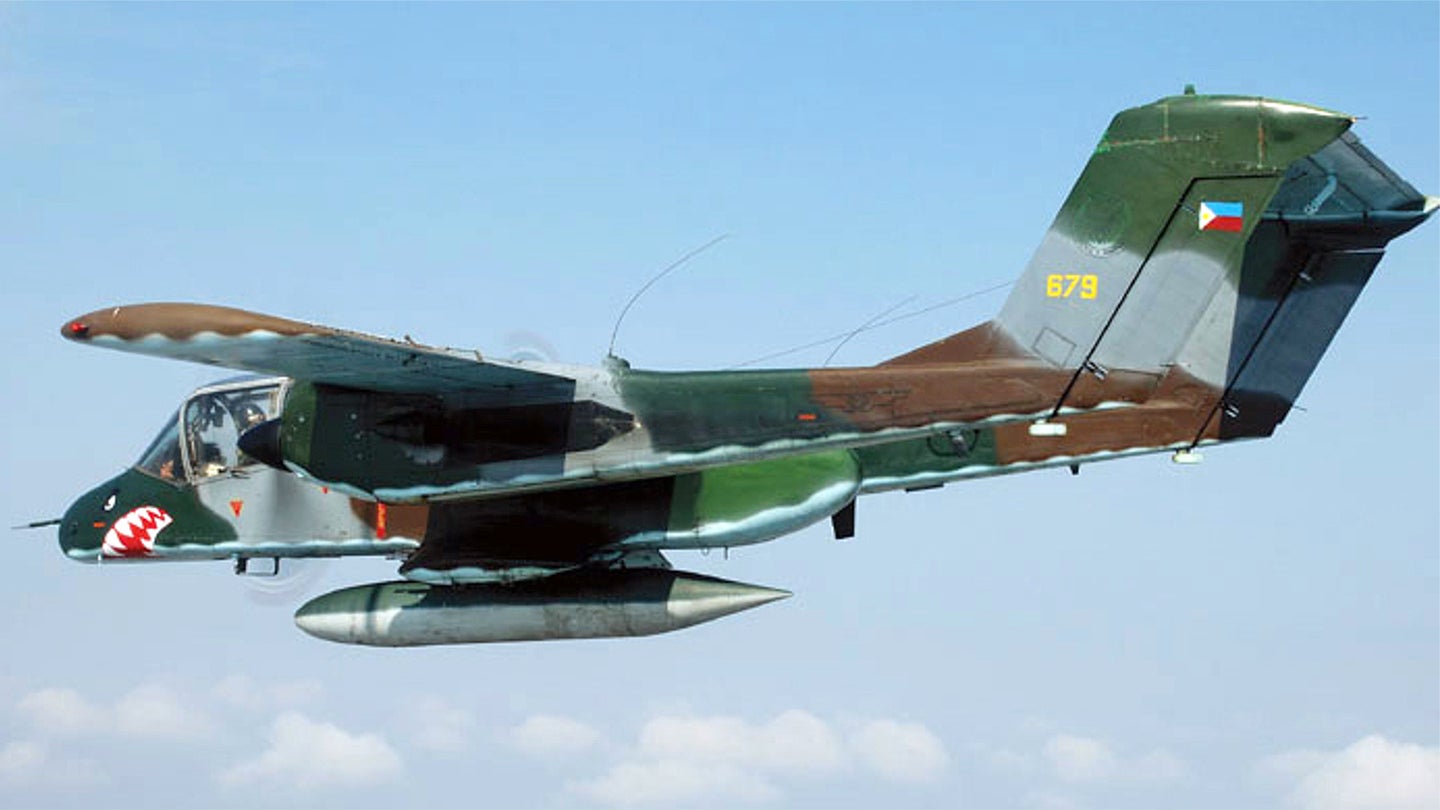 The core of the southern Filipino city of Marawi was seized by Maute and Abu Sayyaf militants, which are directly affiliated with the Islamic State, on May 23th. Since then, Philippines armed forces have performed a a rolling counter-assault on the area in an attempt to dislodge the extremists. The Philippine Air Force's go-to weapon system for the battle? The OV-10 Bronco.

The mission has proven to be extremely difficult as the fighters clearly had been planning and preparing the area for the battle for some time before executing their blitz. Stores of supplies and ammunition are said to be scattered around the city center, and tunnels are allowing the militants to disappear and reappear in a nearly magic-like manner. The use of human shields is also widespread and Filipino Marines and special operations soldiers who are trying to go door-to-door to retake the city have suffered heavy casualties.

It is thought that at least 138 militants and 58 Filipino troops have died in the fighting so far. That is in addition to at least 21 civilians deaths—likely the actual number is far higher. Hundreds of thousands of people have been displaced as a result of the siege and the region has been placed under martial law over fears that the insurrection could morph and expand to a point that containing it could prove impossible

Because of the dense urban area the militants seized and the very limited stockpiles of precision guided munitions in the PAF's arsenal—not to mention laser designation devices used to target them—the country's handful (as in eight airframes) of sparingly upgraded OV-10M Broncos have put their ability to make close-range and precise dumb bombing runs to work on targets in the city. Videos of the Broncos pulling off eye-watering attacks over the city have hit the web, and it's clear that as the situation has become more dire, the rugged old close air support aircraft have only stepped up their sorties.

This isn't the first time the Bronco has tried to buck ISIS. A pair of highly upgraded OV-10s were sent to Iraq to hunt Islamic State fighters alongside special operations forces as an experiment. The results were stunning. The Broncos and their highly trained Navy pilots were turned into flying "man hunters," slinging laser-guided rockets through windows and door openings like a sniper fires their bullets. The aircraft proved to be ridiculously reliable, easy to deploy near the front lines and vicious when it came to devouring the enemy under the most challenging combat conditions.

Although the PAF OV-10s don't have anywhere near the sensor or communications suites of those sent to Iraq, they still can deliver precise fire and even drop GBU-12 laser-guided bombs if they are available and a third party is designating the target with a laser.

In addition to the OV-10s, pretty much all of the assets available to the Philippine Air Force are participating in the impromptu air campaign. AW109Es equipped with gun and rocket pods on their stub wings have been seen making attack runs and providing overhead surveillance. Even the country's new FA-50PH light fighters have flown attack missions against Islamic State positions in Marawi.

Dropping unguided weapons among your own populous and troops is an especially high risk enterprise regardless of how accurate the aircraft is that drops them, and there have been friendly fire incidents. On May 31st, ten soldiers were killed and seven wounded in what is thought to have been an errant friendly-fire airstrike. Still, the Philippine Air Force needs to stay engaged in order to break the siege according to Armed Forces of the Philippines Spokesman General Restituto Padilla:

"Our troops clearly need to judiciously use force because of a stiffer kind of resistance from the inner enclaves of the city... We feel the pain, we feel the hurt of every member or every citizen or every resident of Marawi. But let us remember that we did not start this... It was the armed group, the Maute Daesh/ISIS-inspired group, that entered your city and wreaked havoc on it."

The US has also joined the operation, with videos and pictures emerging of P-3C Orions flying low over the city. The Orions would be using their electro-optical payloads, which include infrared and color video capabilities, for providing overwatch, surveillance and for generating new targeting information. Filipino General Restituto Padilla has stated "We don’t have adequate surveillance equipment, so we asked the U.S. military for assistance. It’s noncombat assistance."

The vast majority of the Philippine Air Force, whose inventory is filled with logistical aircraft and aging counter-insurgency platforms, is antiquated and rudimentary by today's standards. Most all its aircraft lack modern electro-optical sensors, which can be a huge advantage for supporting military operations in urban terrain (MOUT). So even just one P-3C's presence over the battlefield gives Philippine forces a massive upgrade in situational awareness.

Still, America's involvement with the three week long conflict surprised the country's firebrand President Rodrigo Duterte, stating that he "never approached America" for help. And that he was "not aware of that until they arrived." Although there has been mention that there are no US "boots on the ground" in the area, this is likely untrue as there are multiple reports that US special operations forces, who historically have very close ties with their Filipino counterparts, are in fact on the ground in Marawi working in some capacity. One part of their mission is likely to operate theRQ-20 Puma drones that have been seen buzzing around over the city.

We'll keep you up to date as to how the battle against IS militants in Marawi unfolds. In the meantime, you can be assured that the OV-10 will be bringing the fight to the extremists from on high, proving once again just how valuable and effective this old but still effective asset can be, and why light attack capabilities are more relevant today than ever.

Just as we suspected, US special operators are helping out with the fight via providing RQ-20 aerial surveillance support-

Also, the rumor is that the Philippines is slated to receive six A-29 Super Tucanos, which would replace the Bronco. The tender has been an on and off affair for years, but now it seems the Tucano is favored to win or has won over the AT-6 Coyote. Still, there has been no formal announcement of the winner, so it is possible that procurement of a Bronco replacement could be pushed off once again. The A-29 is also a favorite in the the USAF's light air support competition this summer.