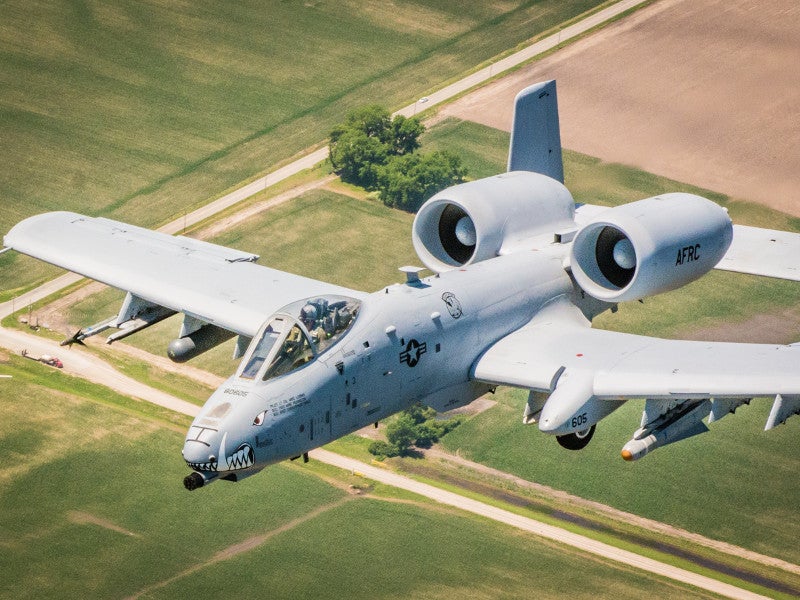 As more details emerge regarding the U.S. Air Force’s plans for the A-10 warthog in the 2018 fiscal year and beyond, it has become clear that the service’s apparent promise to maintain the entire remaining fleet of hardy attack aircraft was highly conditional and entirely temporary. The details come as the low- and slow flying planes continue to prove their worth in the fight against ISIS in Iraq and Syria. Sadly, none of this is really surprising.

On June 7, 2017, two senior Air Force officials told the House Armed Services Committee that they were only planning on keeping at least six squadrons of A-10s through 2030. This stood in stark contrast to written statements from both the service and the Pentagon when it unveiled its portion of President Trump’s Fiscal Year 2018 budget in May 2017. Overview briefings stated, without the apparently necessary caveats, that the entire fleet of more than 280 aircraft across nine combat-coded squadrons would be “fully funded” for at least the next five years.

“The Air Force is committed to maintaining a minimum of six A-10 combat squadrons flying and contributing to the fight through 2030,” according to written joint testimony from Air Force Lieutenant General Jerry Harris, Deputy Chief of Staff for Strategic Plans and Requirements, and Air Force Lieutenant General Arnold Bunch, the uniformed deputy for the Office of the Assistant Secretary of the Air Force for Acquisition. “Additional A-10 force structure is contingent on future budget levels and force structure requirements.”

It wasn’t just the public that might’ve been confused by this new development. Members of the Committee – most notably Representative Martha McSally, an Arizona Republican and former Warthog pilot herself – were surprised to hear this, as well.

“It's the first time you've publicly said that you are going to go down to six squadrons,” McSally told Harris and Bunch. “I'd really like to know what those planning assumptions are of the six squadrons.”

The need to vote in the House curtailed the hearing and neither officer had a chance to answer the question. On June 8, 2017, Air Force General Mike Holmes, head of Air Combat Command, which oversees the bulk of the service’s active component combat aircraft, from fighter jets to spy planes, elaborated on the issue in an interview with Defense News.

As it turns out, the Air Force only requested money to “fully fund” the operations and maintenance costs – day-to-day expenses that include things like payroll, fuel, and basic preventive maintenance – associated with flying the A-10s. The service then shunted a request for money to replace the wings on more than 100 of the jets into its so-called “Unfunded Priorities List,” a wish-list separate from the budget proposal with items it hopes Congress might consider paying for if at all possible.

“Their wings don’t all run out of service life at the same time, it depends on the individual airplane,” Holmes explained. “We have the money in the unfunded list to get another contract for wings and to get a batch that would help us work through a period and give us time to buy more wings for the rest of the fleet if we are unable to go forward to drop down to six squadrons.”

Regardless, Holmes insisted that the plan to cut the three A-10 squadrons by 2030 was within the parameters Congress had set in its previous defense appropriations bills. Lawmakers specifically inserted language into the military spending bill for the 2017 fiscal year that would prevent the Air Force from dropping below 171 operational A-10s before the Director of Operational Test and Evaluation had reviewed the results of a planned fly-off between the Warthog and the stealth F-35A Joint Strike Fighter.

“When their current wings expire, we have some flexibility in the depot, we have some old wings that can be repaired or rejuvenated to go on," Holmes said. "We’re working on a long-term beddown plan for how we can replace older airplanes as the F-35 comes on, and we’ll work through to figure out how we’re going to address those A-10s that will run out of service life on their wings.”

The only problem is that this is almost the exact same sort of argument that prompted legislators to block the Air Force from making changes to the Warthog fleet in the first place. The Air Force has repeatedly argued that keeping the A-10, a plane it has long sought to retire, continues to hamper the process of getting the F-35 fully into service. The service argues that Warthogs are obsolete, that the F-35 can fulfill its functions, and that the Joint Strike Fighter is necessary above all other aircraft for it to maintain a qualitative edge against potential high-end opponents such as Russia or China.

Legislators like McSally have disagreed, citing the aircraft’s extensive combat record and testimonials from the troops it supports on the ground. They’ve pushed back at repeated Air Force attempts to either ditch the venerable ground attack aircraft outright or indirectly push them into retirement by hamstringing vital upgrades, including new communications equipment and data links, the ability to carry newer targeting pods, upgraded mission software, and the aforementioned wing replacement program.

The wing replacement project has been a particular sore spot on both sides for more than a decade now. With the new spans, the A-10s should be able to fly reliably until 2040 or beyond. Without them, the aircraft could quickly become dangerous to fly, making the value of their inherent capabilities a moot point. From the available evidence, it appears that Air Force deliberately delayed and slow-rolled the overhaul in an attempt to finally get rid of the aircraft entirely. I explored the debacle in detail back in 2015 for War Is Boring when this issue had already become a political firestorm:

Most notably, the Air Force hired Boeing to install new wings on more than 200 of the blunt-nosed attackers in 2007. The Air Force itself declared these new, reinforced spans would keep the A-10s airworthy for at least another three decades. But having already expected to get rid of the straight-winged planes, the Air Force effectively waited until the last possible moment to approve the upgrade.

“The A-10 fleet received no money for major modifications or programmed depot maintenance during the 1990s,” the Government Accountability Office reported a month before the work started. “As a result, the Air Force is now faced with a very large backlog of maintenance, structural repairs and extensive modifications.”

The next year, the problems became particularly evident. Cracks in the wings from “fatigue and corrosion” sprouted up across the A-10 fleet, according to an Air Force history we received through the Freedom of Information Act.

“Of 144 aircraft inspected, 138 had cracks,” Air Combat Command’s 2008 historical review explained. “A planned A-10 deployment for the spring of 2009 to Korea was shifted to other systems, ACC cancelled at least one upcoming exercise due to lack of A-10s and one training course was ‘effectively grounded.’”

Even with these self-inflicted problems, the Air Force conceded that it expected to save more than a billion dollars in future maintenance costs with the improvements.

It might not necessarily have been such an issue if the Warthogs hadn’t continued to fly and be such a critical component of American military operations against terrorists and insurgents in places like Afghanistan, Iraq and Syria. Earlier in June 2017, official statistics showed that A-10s and F-15E Strike Eagles had borne the brunt of the fighting against ISIS.

Between Aug. 8, 2014 and May 16, 2017, Warthogs lobbed more than 13,850 bombs and missiles at terrorist targets. This was more than half of the total number of weapons the next four most active aircraft – the B-1 Bone bomber, the F/A-18C/D Hornet and F/A-18E/F Super Hornet fighter jet, and the F-16C Viper fighter jet respectively – had released in total.

To be fair, not all of these aircraft had spent as much time in theater as others. Still, the same can be said of the A-10s, which first arrived on the scene after months of strikes by Hornets, Super Hornets, and Vipers. Regardless, this shows that commanders in the region have demanded the Warthogs more often and requested they spend more time in action overall against the brutal militants.

Without the A-10s, and with the F-35A still having limited air-to-ground capability as it moves slowly toward a full operational capability of some description, it is unclear what other options the Air Force might have to fill the resulting close air support gap. There has been much criticized talk of passing the mission off to ground-attack focused squadrons equipped with F-16 fighters, some of which the service is actively looking to keep operational until at least 2048.

“From my view and my experience, if we need that capability until a proven, tested replacement comes along, nine squadrons is the absolute minimum,” McSally said, according to Defense News, almost assuring there will be another fight with the Air Force over the Warthog.

However, the Air Force has expressed only the slightest interest in developing a dedicated ground attack aircraft to replace the A-10, commonly referred to as A-X. It does plans to begin evaluating lower-end close air support planes later in 2017 as part of an limited evaluation program known as OA-X, but there is no clear indication as to what specific goals that project will actually have in the end.

In the meantime, the A-10 will have to fight on, hopefully getting badly needed improvements before their wings literally fall off.