This F/A-18F's configuration is reminiscent of the big bomb loads lugged around by the A-6 Intruder. 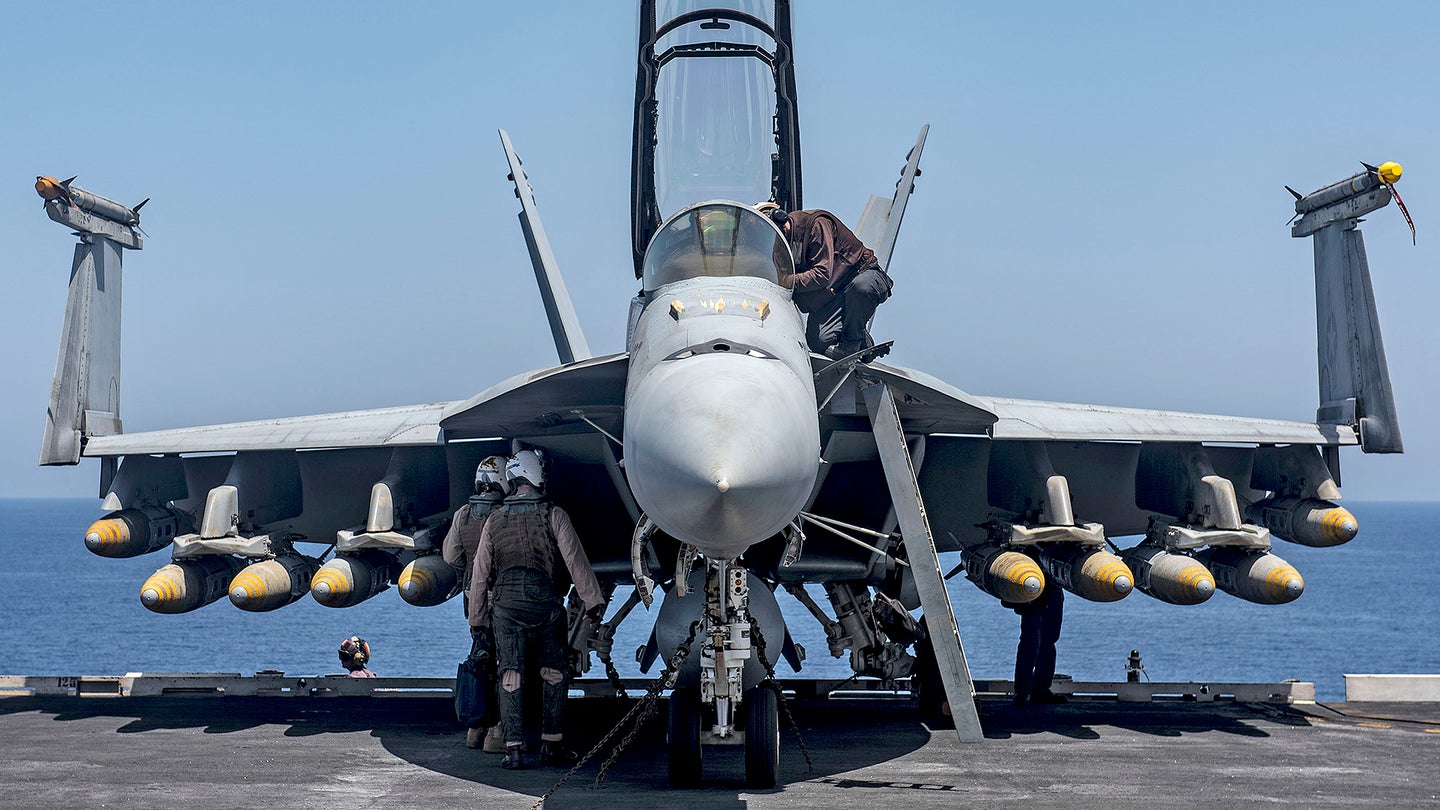 This F/A-18F Super Hornet, belonging to VFA-213 "Blacklions" and operating aboard the USS George H.W. Bush in the eastern Mediterranean, is equipped with one uniquely massive and highly destructive payload.

No less than ten 1,000lb GBU-32 JDAMs are slung under its wings. In addition, a pair of 188lb AIM-9X Sidewinders adorn its wingtips. A 400lb ATFLIR targeting pod is attached on its left intake station, and a 480 gallon centerline fuel tank rounds out its external stores list. Add in the four multiple ejector racks and the pylons, not to mention 412 rounds of 20mm ammo, and this "Rhino's" stores load-out grosses out at roughly 16,750lbs. This does not count the expendable decoys the jet is carrying and there may also be an AIM-120 AMRAAM on the other intake station, but since we can't be sure, we will leave it off the list.

The Super Hornet, which weighs roughly 32,000lbs empty, and has a max takeoff weight of 66,000lbs, in this configuration still has 17,250lbs of payload available. Add a full internal fuel load of 13,500lbs, and the jet is left with roughly 3,750lbs of lifting capacity before hitting its max takeoff weight.

Such a heavy load is very unusual for the types of missions the F/A-18E/F has flown over Afghanistan, Iraq and now Syria since its combat debut in 2003. It is similar in weight to the type's "Five Wet" tanker configuration, which puts the aircraft very near its max gross takeoff weight. In either configuration, the strike fighter will fly far more sluggishly, with a much narrower operating envelope than when in more common combat configurations.

At the same time, this single aircraft in this configuration can obliterate ten separate relatively large and somewhat resilient targets during a single mission, or even on a single pass. Its targets could be an entire enemy base, or multiple separated buildings in a city, or a number of pillboxes and fortified revetments in a certain area, or a fleet of parked armor. These weapons could even be used to crater of a strategic roadway with pinpoint accuracy in ten separate places.

In comparison, before precision guided munitions, and especially the JDAM were commonplace, it would have taken an entire carrier air wing to accomplish such a mission, and even then the chances of destroying all ten targets within the target set would have been relatively low. This reality underscores just how powerful the modern carrier air wing has become. Whereas during Vietnam dozens of Navy strike aircraft, supported by fighters, tankers, electronic warfare, suppression of enemy air defenses, and command and control aircraft may have attacked a single bridge with a questionable chance of success, now one Navy strike fighter alone can attack multiple bridges with near certainty of success on a single sortie.

Although back in the pre-precision guided munition age, large bomb loads were common on Navy strike aircraft. It was a matter of the volume of fire needed to overcome limitations in precision. The A-6 Intruder in particularwas the carrier's heavy hitter, often times being photographed laden with tons and tons of munitions. One of the primary load-outs for the Intruder was no less than 24 500lb Mk82 bombs on multiple ejector racks as well as a 300 gallon centerline fuel tank. This amounts to over 14,000lbs without the pylons, ejector racks or the weight of the empty external fuel tank included. In comparison, B-17 Flying Fortresses would carry a bomb load of around 4,000lbs for missions over Germany during World War II.

Now the Intruder would have had to drop a good portion of its ordnance before being able to land aboard the boat. The Super Hornet can land at a gross weight of 44,000lbs. That means that F/A-18E/F crews have roughly 12,000lbs of fuel or weapons to retain for future missions. So there is no way the bombed-up Super Hornet featured in this post would have been able to land with all its stores, and nothing hanging on that aircraft is cheap. Each JDAM costs roughly $15,000 to $20,000 depending on which source you check, and dropping an empty centerline tank alone won't get the jet to its weight goal alone either.

Regardless, that is a lot of precision firepower being carted off a carrier by one fighter in this day in age, and ISIS surely weren't happy campers once all those GBU-32s detonated.