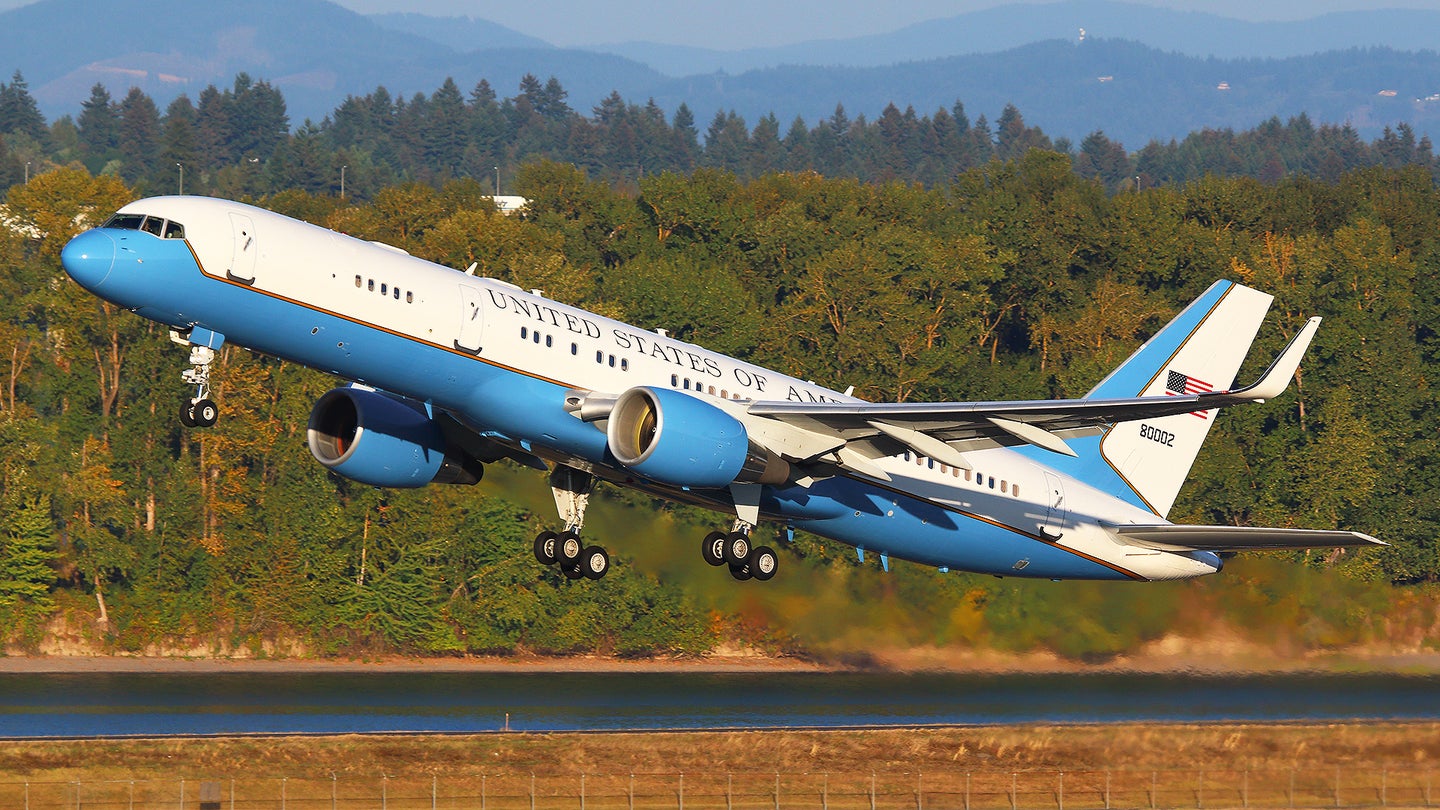 The U.S. Air Force is setting its sights on replacing its aging fleet of four E-4B National Airborne Operations Center (NAOC) aircraft once and for all, as well as its fleet of six C-32As that commonly carry the Vice President around under the callsign "Air Force Two," as well as other high-level officials and diplomats.

In President Trump's new budget, six million dollars is set aside to start a program office for the new Air Force Two replacement project, with its primary task to begin studying what airframe could fulfill the mission as well as possibly others. A similar program is also in place to examine how the E-4B's mission and the E-6B Mercury's mission can be consolidated into a single aircraft, and using one common platform to replace all three aircraft seems not just possible, but probable.

Although they largely fill disparate roles, both the E-4B and the C-32A are key components within the U.S. Government's continuity of government and executive command and control capabilities. As such, they would carry some common systems, including certain communications arrays and control interfaces, as well as enhanced power generation and defensive countermeasures suites. Both aircraft would also be hardened against electromagnetic pulses that are created by the detonation of nuclear warheads. Clearly, by using one aircraft for both missions, huge sums of money can be saved in development costs, not to mention procurement costs down the road.

The E-4Bs date back to the mid 1970s, and the airframes are based on the 747-200—the second iteration of the first generation of the iconic jumbo jet that, along with its 747-100 predecessor, have largely disappeared from the skies due to their high operating costs and maintenance demands. The C-32As are far fresher airframes, being procured in the later 1990s and early 2000s, and are receiving a mid-life update now, which includes a new interior, upgraded communications, and enhanced cockpit features like a heads-up display and enhanced vision system. But still, these aircraft are considered middle aged, and have had their share of high-profile breakdowns in recent years.

The initiative to begin studying how to pare down the E-4B NAOC and E-6B Mercury's mission sets into a single airframe, dubbed the Survivable Airborne Operations Center, will likely lead to the E-4B replacement aircraft also replacing the E-6B down the road.  Doing so makes sense as so much of both aircraft's capabilities overlap with one another.

As of now, the E-4B mission focuses on being ready to take the National Command Authorities, primarily the President and the Secretary of Defense, aloft during a major military crisis, and allowing them to control America's military forces, and especially its nuclear triad from on high. The jet also serves as a rapidly deployable command post and communications relay system for FEMA as well as working as the Defense Secretary's chariot when traveling abroad.

The E-6B fleet can, to a lesser degree, also accommodate the National Command Authorities and help during a national disaster, although it is primarily tasked with the Looking Glass and Take Charge And Move Out (TACAMO) missions, both of which involve the release of America's nuclear arsenal. The E-4B is capable of some of these functions as well, so you can see why having two systems really is far from ideal.

Tasking and fleet management is also an issue, as the E-4Bs are limited in number with just four in inventory. One of which is usually in depot maintenance, and another sitting alert. So that leaves two airframes to spare for other missions like hauling the Defense Secretary overseas. And considering these aircraft also need a lot of regular care, sometimes the two extra aircraft aren't available for operations at all.

The E-6Bs are newer airframes than the E-4Bs, being fielded in the early 1990s. They were the last Boeing 707 derivatives delivered, so while newer, it's not exactly as if the jets were state-of-the-art when they entered service. Still, there is considerable life left in the Navy's 16 jet strong E-6B fleet, so it is likely that the DoD will move to replace the E-4B fleet, which are among the very most expensive aircraft in the Pentagon's inventory to operate, first. Then this same aircraft configuration will slowly replace the E-6Bs probably the late 2020s through the 2030s as the Navy has stated that the type is cleared to fly that long if it continues to receive upgrades.

In essence, what we are talking about here is likely one airframe type that will replace three separate aircraft—the C-32A, E-4B and eventually the E-6B. So what will that airframe be?

At this time, it seems like a derivative of the KC-46 Pegasus seems most likely. The aircraft size sits directly between the C-32, E-6B and the E-4B, and it will already be in the Pentagon's inventory in large numbers. Additionally, the KC-46 is already militarized and features much of the same hardened infrastructure that a E-4B, E-6B and C-32A replacement would need to accomplish their missions.

The fact that the 767 is an older design compared to say the 787 may trouble some, but there would be a lot of development risk in militarizing the 787, and especially in adapting it to a critical role like those that pertain to continuity of government, command and control and nuclear weapons release missions. In other words, converting the 787, with its new sub-systems and construction materials, over to a "doomsday plane" would take a lot of time and money.

At first glance, the new stretched 737MAX 10 could also possibly be a lower-cost contender, although it is highly doubtful that the USAF and the other powers involved would step down in size from the 757, especially when it comes to the the C-32A and E-4B replacements. According to Defenseone.com, the USAF's budget request for the C-32A replacement program pretty much defines a KC-46 derivative over a smaller aircraft like one from the 737 family, stating:

“The C-32A recap aircraft would be a more robust aircraft that would mitigate many capability gaps that exist when the current C-32A aircraft serve as a backup to VC-25A... The C-32A replacement aircraft would have increased range, passenger capacity, enhanced senior leader communications and a private work space.”

Another option would be the 777, although that would be a much larger aircraft than the C-32A and the E-6B. Additionally, the 777 is not in the USAF's inventory, and has never been militarized before. Its ability to operate from shorter fields may also be an issue and It would also require a whole new Pentagon logistics chain. This is counter-intuitive to the USAF's goal of pairing down its types in service, not the other way around.

It is worth noting that the timeline for fielding a E-4B replacement could be sped up following the damage done to two E-4B's at Offutt AFB when a tornado touched down there on June 16th, 2017. Boeing and the USAF are examining the aircraft to ascertain their level of damage, but if it is deemed that those aircraft are too expensive to repair, especially considering their age, the search for a replacement could be drastically accelerated. There is also the case to be made, depending on the damage, that those storm stricken jets could be used as spare parts donors to help prop up the readiness and reduce the cost of operating the remaining two E-4Bs as well as the aging VC-25 fleet—all of which are based on the 747-200 platform.

The missions the C-32A, E-4B and E-6B provide are all critical, and although it may be sad seeing these unique aircraft go—especially the hump-backed E-4B—it makes total sense to use a common replacement platform for all three. In a pinch, a consolidated fleet of "E-46s" capable of the NAOC, TACAMO, Looking Glass, FEMA emergency support, and Secretary of Defense transport missions could even stand in to transport other high-ranking officials, including the Vice President in a pinch. But with a new fleet of "VC-46s" that likely wouldn't be necessary.

A small fleet of VC-46s could also take the operational load off the primary aircraft that provide the Presidential airlift "Air Force One" mission today, once again the two VC-25As that are supposedly approaching the end of their service lives. Even with the USAF ordering new 747-8i based aircraft for this mission, the President could use the smaller VC-46, which would still be quite larger than the existing C-32A, when traveling domestically.

Currently the President only uses the C-32A when operating out of airports that cannot support 747s or when a VC-25A is not available, which is rare. We have gone in depth about this and other issues surround the highly publicized Air Force One replacement program before, but suffice it to say, a widebody replacement for the C-32A could allow the White House to change the way the President travels, and likely save money in the process.