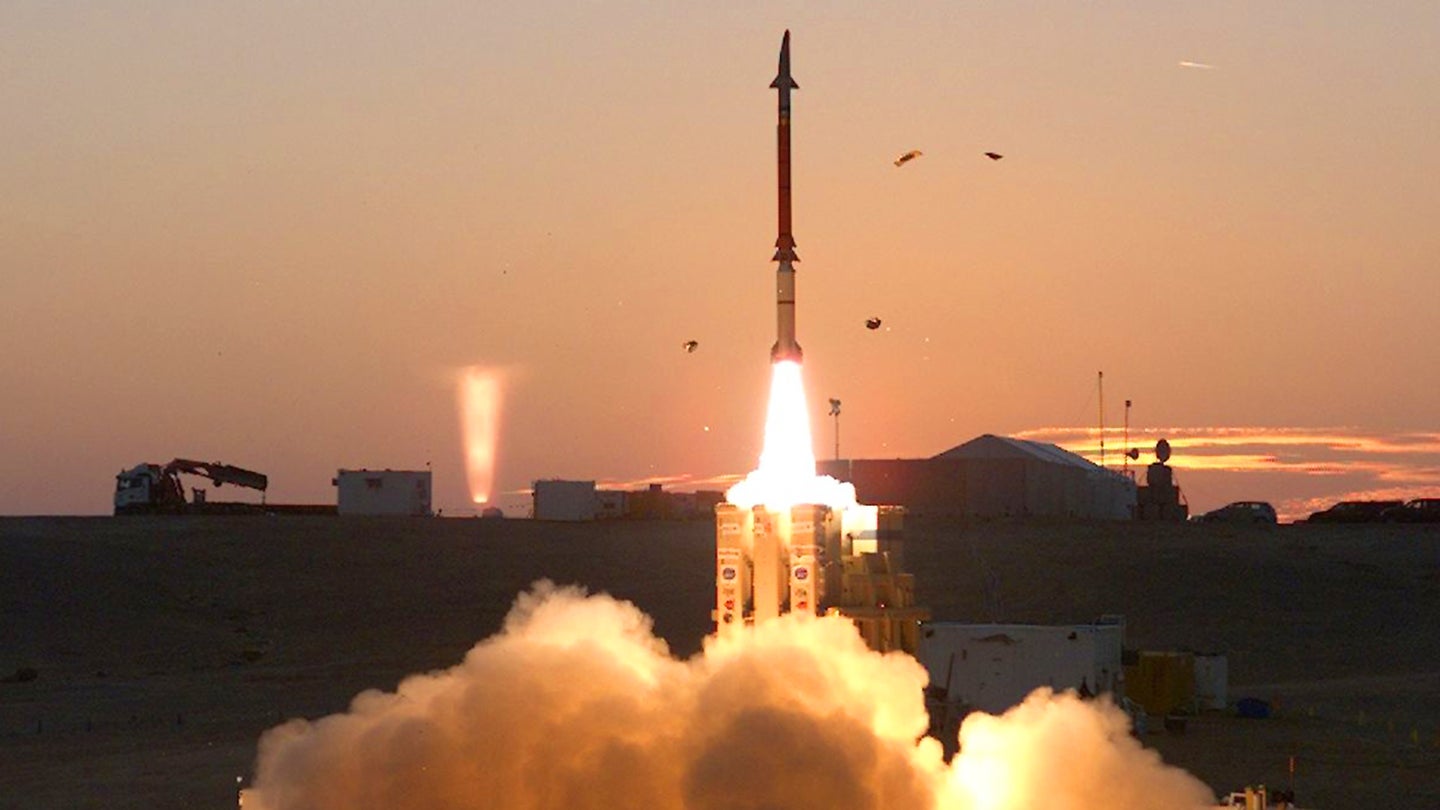 Israel is known to go its own way when it comes to its air combat capabilities. In the past, this has included making dramatic modifications to imported air warfare assets, and also developing its own unique weapons and sub-systems. The country's guided munitions and missile development and manufacturing abilities are especially strong, and US assistance in the form of cross-corporate cooperation and foreign aid have allowed the Israeli defense industry to field extremely high-tech systems that are tailored to the country's specific needs. One of these systems is the Stunner missile.

The Stunner is the pointy-end of Israel's David's Sling air defense system, which just went operational last April. Designed by both Israel's Rafael and America's Raytheon, David's Sling makes up the center layer of the multilayered pie that is Israel's complex integrated air defense system. It sits above the Iron Dome anti-rocket and artillery system, and below the Arrow ballistic missile defense system, and overlaps in capability with older Patriot missile batteries which it is intends to replace. It can be used to shoot down short-range ballistic missiles, aircraft, drones, cruise missiles and large artillery rockets.

The missile is very fast, operating at hypersonic speeds as high as mach 7.5, and covers long ranges, up to about 175 miles depending on the engagement dynamics. But this is when the Stunnder is configured as a surface-to-air missile, where it uses a large booster to get it to altitude and high speed. An air-to-air version would not have the benefit of an ungainly booster, but it will benefit at launch from an aircraft's speed and altitude.

Stunner has a three-pulse motor that outputs different thrust levels during different portions of its flight profile. In particular, it provides added acceleration and maneuverability during the missile's terminal attack phase. The Stunner carries no warhead, instead it is a hit-to-kill system, so the missile can be built more compact and lighter, and more of its internal space can be used for fuel than a traditional anti-air missile that carries a heavy blast fragmentation warhead.

Above all else, the Stunner is unique because of its guidance system. The missile uses three major sensors to guide it toward its target and to pulverize it. A data-link provides the missile with mid-course updates so that it can come within range of activating its novel dual-mode seeker. The missile has a unique, canted "dolphin nose," which came to be as the result of the demands of fitting both an electro-optical/imaging infrared sensor and a active radar sensor in the compact nose section of the missile.

The combination of these sensors make the Stunner extremely deadly and unsusceptible to jamming and countermeasures. If the radar sensor is jammed, the missile's optical seeker can continue to guide it during its terminal phase of an attack. If active countermeasures attempt to confuse the missile's optical seeker, the radar seeker will still remain locked onto the target. Basically the configuration offers a higher kill probability and better target discrimination than its single seeker progenitors, and its imaging infrared seeker can likely be programmed to recognize and hit specific parts of a target, like where a fighter is most vulnerable, or to impact a rocket's warhead section and so on.

In comparison, nearly all modern western medium and long-range air-to-air missiles use a data-link and active radar homing alone. You can read all about the latest in western air-to-air missile capabilities in this past feature linked here.

There has been talk that Stunner might be migrated from the ground to the air, and could be a far more capable successor to the Derby air-to-air missile, as well as possibly challenging the AIM-120 AMRAAM for longer-range engagements. Adapting SAMs into other forms of missiles, and visa-versa, is nothing new. Today the US Capital is guarded by an internationalized ground-based version of the AIM-120 AMRAAM, known as the Norwegian (or Networked) Advanced Surface to Air Missile System, or NASAMS for short. The FIM-92 Stinger shoulder-fired SAM has been adapted to arm helicopters with a light-weight and short-range air-to-air missile. The AIM-9 Sidewinder was used for the MIM-72 Chaparral SAM system, and the RIM-66 Standard missile airframe was adapted to become the AGM-78 air-launched anti-radiation missile. And these are just a few examples.

Considering its speed, maneuverability, seekers, and hit-to-kill configuration, it sounds like the Stunner would be a near ideal missile for modern air-to-air warfare. One thing that comes to mind is that an air-to-air Stunner could be especially useful for the IAF's F-35I fleet.

Modifications to the F-35's internal weapons mounts could allow for more than four Stunners to be carried internally at one time, as is currently the case for the AIM-120 AMRAAM. The Stunner is a slimmer, smaller missile overall than the AIM-120. As such it may be possible to field six or eight of these missile inside the F-35I's weapons bays, giving the jet a substantial counter-air capability increase. A mix of two AIM-120s and four or six Stunners may actually be the optimal loadout if modifications to the F-35's internal racks can be made.

Israel already plans to make significant modifications to their F-35Is, and they also intend to outfit the fleet with indigenous air-to-ground weapons, so integrating the Stunner onto the new jet seems like it would be a highly logical move. Stunner is already a fully networked missile design, with lock-on-after launch capability even for short-range engagements—a capability that is necessary for deployment from the F-35's internal weapons stations.

Expanding the F-35's air-to-air magazine has been long a sticking point with customers for the jet, and there are some other notional solutions being floated, like Lockheed's Cuda, but that missile is likely shorter-ranged and will not have the dual-mode seeker or blistering speed that the Stunner has.

Turning Stunner into an air-to-air missile for the IAF could also lead to export sales to other F-35 users. Even those air arms who don't operate the F-35 could have a high interest in the Stunner's unique capabilities, and there isn't another western missile that currently includes a data-link and both an imaging infrared and radar seeker together on the missile at the same time, not to mention some of the missile's other unique selling points.

What remains an unknown is what type of range the air-to-air Stunner would possess. But even if it can achieve only intermediate-to medium ranges, that is still enough to make it an attractive new option for air arms around the world, and especially for stealthy fighters that can get in closer to enemy aircraft before attacking compared to their more vulnerable 4th generation counterparts.

Now as tests proceed, we'll just have to wait and see if the Stunner can truly stun the air combat universe.