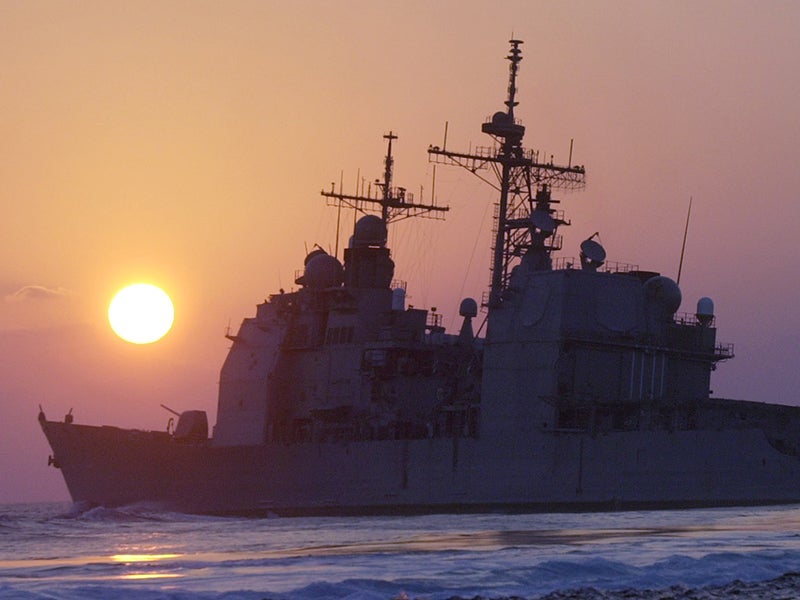 After pushing to retire and mothball existing ships so that it can field new ones, the Navy now says it can squeeze significantly more life out of the majority of the fleet it already has. This is all in reaction to the controversial goal set by the Trump Administration to grow the Navy's fleet size from roughly 275 hulls it has in service today to 355 hulls in the future. A similar goal was set by the Obama Administration of 308 hulls.

Much has been made about Trump's dream of a 355 ship Navy, including how his 2018 budget didn't reflect this policy and how America's shipbuilding industry would be challenged to meet such a goal. Now the Navy suddenly thinks that the majority of its ships' planned service lives can be extended at a fairly nominal cost, keeping some of its most costly surface combatants in service for 30 or 35 years, or even longer, instead of just 25 years.

Vice Admiral Tom Moore, who was speaking at an event put on by the Center for Strategic and International studies and the U.S. Naval Institure, stated the following:

“We’re taking a pretty close look at what it would take to get them out another five, another 10 years. And the reality is, for a steel hull, if you do the maintenance, you can get its service life out much longer... I think there’s great opportunity to make the investments, a relatively small investment, to keep the ships around longer than we have today. And people will say, well we’ve never really gotten a surface ship past 35 or 40 years, and I will point out all the time that we routinely take aircraft carriers to 50 years. And the reason we do that is because we consistently do all the maintenance you have to do on an aircraft carrier to get it to 50 years. So we know how to do this, and I think what you’ll see is we’re going to take a very serious look at taking the existing service life of the fleet and extending it out five or 10 years. If you do that – and you’ve seen some of the force structure assessments that get us to 355 ships around 2045 if we just keep ships at their current service life and then build new – we can probably accelerate that to get to 355 by about 10 to 15 years faster for a relatively small investment over about a 30-year period. So we’re going to take a very close look at that.”

The Admiral was a little hesitant when it came to making the same claim for aluminum hulled ships, in particular the Independence class of Littoral Combat ships that is based on a ferry design and built by Austal in Mobil, Alabama:

“I don’t want to presuppose a decision... We don’t have the knowledge base on how that hull performs over along period of time like we do with steel, with steel hulls. What happens over 25 years? Aluminum doesn’t quite have the tensile strength, so you’ll have a little bit more flexibility in the hull. We’ve seen this with some of the cracking in the cruise superstructures… We’ll proceed a little bit more cautiously on extending the service life of aluminum ships than we will steel-hulled ones.”

He also added that the decision to move forward with such a plan would have to be made at the very top of the Navy's power structure. Considering that funding remains relatively tight, such a plan, as well as building ships for longer service life from the get-go, would likely be necessary to make the 355 hull Navy vision a reality.

This is precisely what The War Zone has been saying since Trump's candidacy became a Presidency—that the Pentagon will have to extended the lives of the equipment it has, and pull some vehicles out of mothballs, in order to even come close to realizing Trump's vision. This is especially true considering massive sums of extra money earmarked for defense has not materialized as planned. Even if it did, it wouldn't have been enough to begin with. From a War Zone piece about what to expect from Trump as Command In Chief dated November 11th, 2016:

"It's likely that once Trump gets into office and realizes the costs associated with procuring new military hardware, he will look toward older, and even mothballed weapon systems to help bolster his larger force size goals. Reagan did exactly the same thing after taking office. This means aircraft like the A-10 could be safe from the budgetary axe, while other 4th generation fighters could be upgraded—with some that are currently sitting in the boneyard once again pressed to service. The same can be said for the equipment of every service... A focus on increasing the number of high-end surface combatants is likely, including upgrading and redeploying Ticonderoga class cruisers that have been sidelined for financial reasons."

It is interesting that the Navy, which had put some of its most powerful and in-demand surface combatants into storage under the laughably named "phased modernization plan," because the service didn't allocate the money to operate, maintain and upgrade them, is now talking about greatly increasingly its budget for just those things across the majority of the fleet. In addition, the Navy has been quick to give away or sink its sturdy Oliver Hazard Perry class frigates in order to gain Littoral Combat Ships that are far less survivable and have struggled deeply to find their place in the Navy's surface fleet hierarchy. Meanwhile, foreign allied navies have snapped these ships up and upgraded them with new capabilities, including Mark 41 vertical launch systems, and plan on sailing them for decades to come.

Trump's 2018 budget does begin to support this new strategy to some degree already by dumping more funds into the Navy's readiness, including increasing maintenance, upgrades and training budgets. But at best, even with the help of extended life cycles, the Navy will be hard pressed to meet the 355 ship goal within 18 years. Many studies have supported this inventory number, but in the end, it is as much about what each ship is capable of and how reliable it is at doing its job than about a raw and somewhat arbitrary hull number.

Nonetheless, making better use of the assets the Navy already owns is a good thing, and such a plan should be achievable as long as shipbuilders' order books are full. Otherwise the dreaded and all-powerful shipbuilding special interests will rear their ugly head and squash such a plan flat.