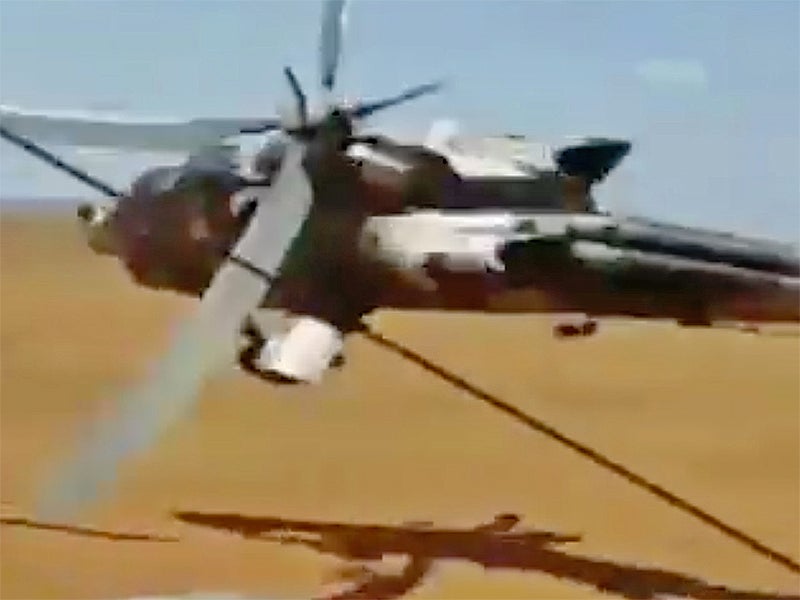 The origin story of the South African designed and built Rooivalk (Red Kestrel) attack helicopter is a funky tale in itself. Huge sums of money were spent on developing the helicopter and its utility helicopter cousin, the Oryx, both of which are based on the Aérospatiale SA 330 Puma. It took 27 years for the Rooivalk to finally become operational in 2011. In the end only 14 Rooivaks were built, with a dozen left flying for the South African Air Force's 16th Squadron today.

But seeing how few exist, it is surprising that South African Air Force aviators push the helicopter to the crazy extremes shown in the video below.

Now that is a high-speed and very low pass if there ever was one!

Loosely analogous to the Airbus Helicopters Tiger, the Rooivalk packs a potent attack helicopter punch while still being relatively compact and capable of the armed scout mission. The chopper features a 20mm chin-mounted, swiveling cannon with 700 rounds available. It can carry 70mm folding-fin rockets or up to 16 locally built Mokopa anti-tank missiles. It can also sport air-to-air versions of the MBDA Mistral short-range missile for anti-helicopter warfare operations. Max takeoff weight tips the scales at just over 19,000 pounds, which puts it somewhere between the Tiger and the Apache in terms of mass.

The Rooivalk was never exported, geopolitical reasons aside, this was largely due to concerns about its supportability and the stability of South Africa's aerospace industry. Seeing that a similar helicopter was available from Eurocopter (now Airbus Helicopter) in the form of the Tiger—along with increasing competition from other helicopters like the Bell AH-1 Cobra, Agusta A129 Mangusta, Boeing AH-64 Apache, Mil Mi-28 Havoc, etc—the Rooivalk had a hard time growing its user base. Also, the fact that European defense manufacturers associated with the Puma would not likely support Rooivalk export models if South Africa's defense industry couldn't did not help its cause.

In recent years, South African aerospace conglomerate Denel Defense has floated building a "Mk2" version of the Rooivalk. The helicopter would be greatly upgraded with new sensors and weapons, while also leveraging proven enhancements made to existing Roovialks serving with the SAAF. Egypt, Brazil, Poland, Nigeria, and even India have been approached by Denel to see if there was interest in such a concept, although at this point the Rooivalk Mk2 remains a pipe dream.