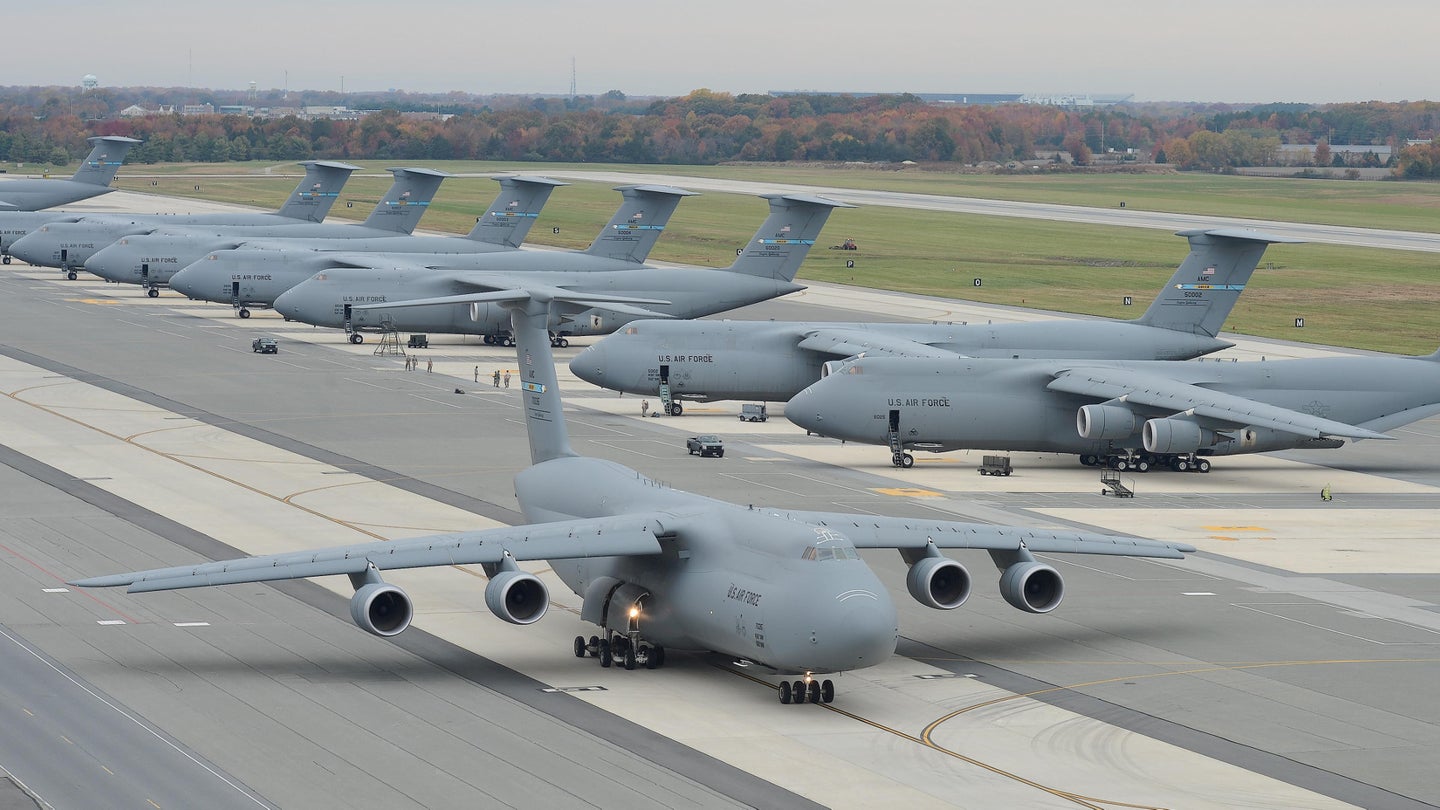 The U.S. Air Force wants to get more massive C-5 Galaxy cargo planes back into active duty. The plan follows more than a decade of retirements or other cost cutting measures in the face of budget shortfalls that had ultimately trimmed nearly half the fleet.

Lieutenant General Jerry Harris, the Air Force’s Deputy Chief of Staff for Strategic Plans and Requirements, made the announcement during a Congressional hearing on May 25, 2017. The proposal would take eight C-5s from the service’s inactive reserve and put them back into full service by the end of 2021.

“We’re going to buy back two a year for four years,” Harris explained. But he would only be able to do it “if we’re able to have a predictable budget.”

It's not clear what model of Galaxy the Air Force has awaiting a return to active duty. Officials have said the eight aircraft are all the latest C-5M Super Galaxies, but it seems unlikely the service would choose to put recently upgraded models into reserve status while antiquated aircraft continue to fly. It is possible these references only reflected the expected end state, since the service expects to eventually update all of its Galaxies to the M standard.

Regardless, Lockheed Martin’s C-5M is the Air Force’s largest cargo hauler and among the largest aircraft anywhere in the world. The four engine jets can carry up to a maximum of 135 tons of cargo. The planes can fly more than 4,800 miles with a more typical load of 120,000 pounds of personnel, equipment, or a combination of both. The Galaxy can refuel in mid air, too. By comparison, the U.S. military’s next largest airlifter, the C-17A Globemaster III, can fly approximately 2,400 miles with its maximum payload of 85 tons.

This major improvement project included both the Avionics Modernization Program (AMP) and the Reliability Enhancement and Re-engining Program (RERP). AMP involved adding a new “glass cockpit” with digital rather than analog systems, as well as modernized communications, navigation, and air traffic management system. The latter piece of gear made the aircraft compliant with overarching Federal guidelines for safe air travel.

The RERP replaced all four of the General Electric (G.E.) TF-39 engines found on earlier the A, B, and C models with all-new G.E. F-138s. Also known as the CF6, each of these new high-bypass turbofans produced more than 8,000 pounds more thrust in addition to being more fuel efficient, extending the aircraft's overall range. On top of that, this gave the new M version a 58 percent increase in climb performance versus the older variants, on top of a 20 percent increase in payload capacity. Most importantly, the Air Force expected the new motors would cut the cost per flying hour by more than 30 percent.

All of this made the Super Galaxy even more versatile and able to reach even more destinations than before. During an open house on March 31, 2017, Air Force General Carlton Everhart, in charge of Air Mobility Command, noted that a C-5M had recently flown straight from Travis Air Force Base in California all the way to Yokota, Japan without the traditional stopover in Hawaii. “It’s the only airlifter in the inventory that can make the flight non-stop, which means we can put the American flag on the ground in hours versus days,” he declared.

Unfortunately, a combination of years of budget uncertainty and competing priorities have forced the Air Force into the position it’s in now, where it has 56 of the massive jets, but only flies 48 of them. The other eight are sitting in “backup inventory” meaning “we still have the aircraft but lost all manning and funding to operate them,” Everhart explained at the event in March 2017.

After the Budget Control Act of 2011 capped defense spending and imposed significant cuts as part of a process known as sequestration, the service argued it needed to trim the fleet in order to pay for other priorities, including the F-35A Joint Strike Fighter and KC-46A aerial tanker. But the process had begun well before then.

The capability offered by the C-5 never came cheap. The Galaxies’ were and still are expensive to fly and maintain, costing the Air Force more than $100,000 per flight hour as of 2016.  The aircraft’s relative complexity meant that historically less than 70 percent of them were ever mission capable and that ready rate was often even lower, hovering near 60 percent. So, between the 2004 and 2013 fiscal years, Congress approved a series of plans to ultimately trim the entire fleet to just 52 planes. More than 75 C-5As would head straight to the boneyard. Of course, the service did plan to upgrade the remaining aircraft to the C-5M standard.

Unfortunately, sequestration delayed these upgrades. As of 2016, out of the 48 flyable planes across the active Air Force, Air Force Reserve, and Air National Guard, there was still a combination of 10 C-5As and Bs, as well as a lone remaining C, according to data from the Air Force Association. Cost cutting also meant Air Mobility Command had to keep the inactive jets sidelined longer than expected.

“Those eight C-5Ms? I was going to buy them back within a two-year period,” Everhart complained in his remarks in March 2017. Between sequestration and funding from a series of short-term “continuing resolutions” rather than an actual budget, that idea had “been delayed twice … in two budget cycles.”

Compounding the problems was the fact that no American aircraft manufacturer was making a strategic airlifter of any description. This meant the Air Force would either have to upgrade existing aircraft, such as the C-5s, or hire a company to come up with an all-new design. The latter option would be an immensely time consuming and expensive proposition.

So, the service had to have known that an increasingly smaller airlift fleet could only limit its ability to perform its missions. Now its finally and actively looking to reverse that trend when it comes to the Galaxies. The service’s Fiscal Year 2018 budget proposal includes funds to get the first two inactive C-5s back in operation, as well as continue work to finally upgrade the remaining aircraft, according to its official budget brief. On top of that, the service is looking for money to finish installing the Large Aircraft Infra-Red Counter Measures (LAIRCM), a laser-based defense system against infra-red guided missiles, across all of its cargo aircraft, including the C-5s.

At present, within the U.S. military, only the Galaxy has the capacity to move certain units and their equipment as a single package. In a realistic scenario, it would take multiple C-17s to do the duty of just one C-5. The Air Force cannot and does not expect the Globemaster IIIs to fill this role. Short of contracted airlift, the U.S. military doesn't have many other options if it wants to deploy significant numbers of troops and their associated equipment within hours rather than days, weeks, or even months. Even then, only aircraft like the similarly sized Antonov An-124 or the gargantuan An-225 can truly match or exceed the C-5's abilities. Back in 2015, Ben Brown, an Air Force C-5 pilot, had this to say about these different aircraft in an interview with The War Zone's Tyler Rogoway:

“The An-124 is a big bird as well, but the C-5 has its advantages. The C-5 is made in America, flown by an Air Force crew, and a display of American airpower wherever it goes. The C-5 can refuel in flight, if required. Inflight, the whole of the C-5 is pressurized, whereas an An-124 (to my knowledge) only pressurizes the flight deck and passenger compartment, so the cargo compartment is unpressurized and can’t easily be checked in flight.

The biggest strength in my mind is that the C-5 has an easily configurable floor; it can be flat and smooth for rolling stock, or you can flip portions around and pop up rails so that you can roll pallets on, as well as having omni-directional rollers on the cargo loading ramps. I’ve heard that the An-124 has a wooden floor, so that makes it different than ours. I’m not familiar with all the particulars of the An-124, so I don’t know how fast or far it goes, or if it can taxi easily, or anything like that. Bottom line, from my perspective, is both are massive aircraft with unique capabilities.”

So, when the U.S. military needs to move all sort of of heavy and oversized items, from Army tanks and helicopters to ballistic missiles and even other aircraft, it has few better options than its own C-5s. Hopefully the Air Force will be able to keep an adequate number of them flying for the foreseeable future.