This is the largest aircraft ever built in terms of wingspan, even larger than the "Spruce Goose." 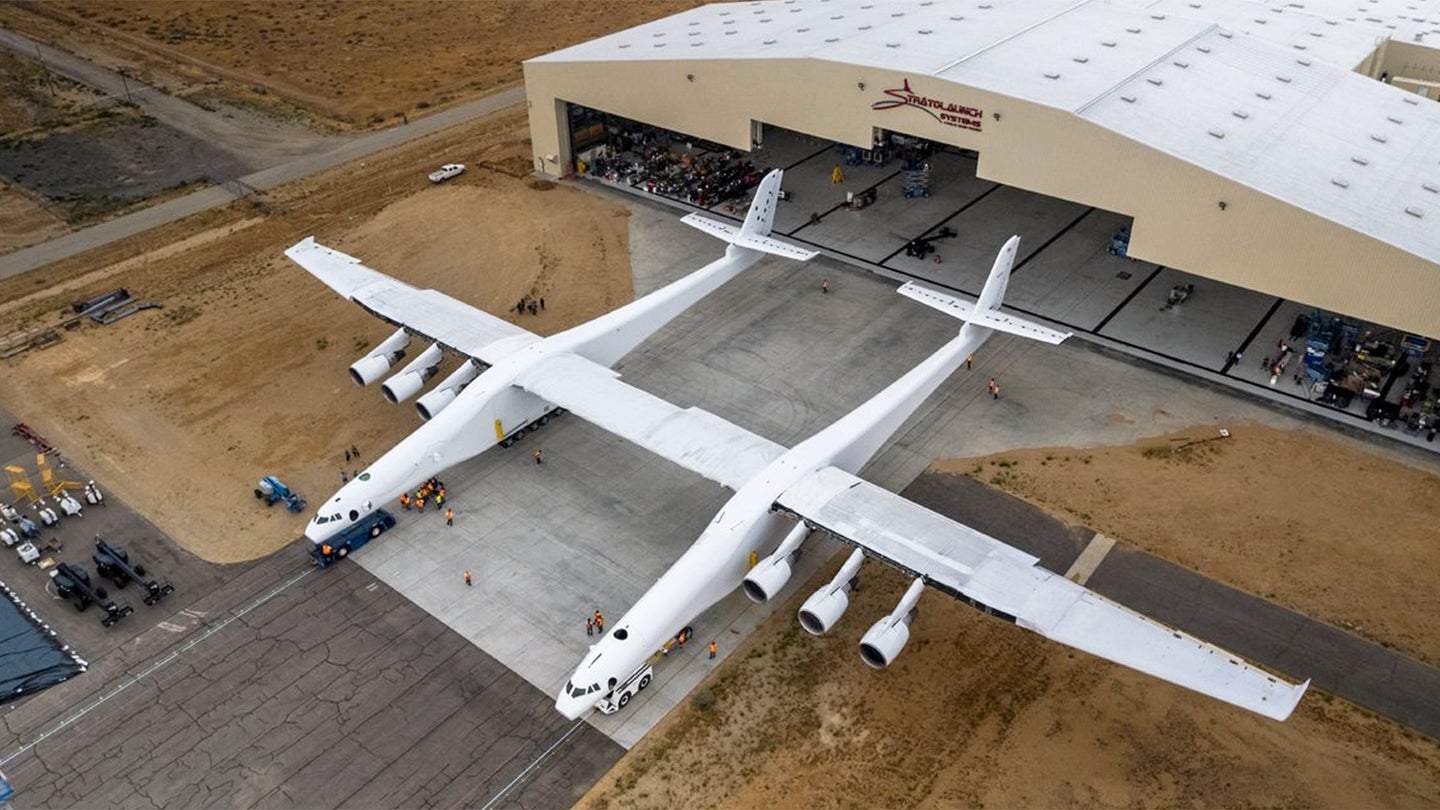 After the better part of a decade of development, we are getting our first glimpse of Stratolaunch's massive mothership outside her low-slung hangar at Mojave Air and Space Port. As expected, the size and design of the huge and exotic aircraft is impressive to say the least. At 385 feet wide, it has the longest wingspan of any aircraft in the world—even longer than the record-setting Hughes H-4 Flying Boat, aka the "Spruce Goose." Loaded fully, it will tip the scales at a whopping 1,300,000 pounds, and is powered by six Pratt & Whitney PW4056 turbofan engines—the same engine that powers many 747-400s—putting out a combined 340,500 pounds of thrust.

There is no doubt about it, Stratolaunch has given birth to a truly technologically wondrous machine.

Stratolaunch describes its capabilities as such:

Stratolaunch’s reusability and air-launch capabilities enable us to take an airport-style approach to operations for launch services. Stratolaunch will take off from a runway, rather than a logistically vulnerable fixed range, which allows us to avoid hazards such as inclement weather, airborne traffic and heavy marine activity. Stratolaunch’s airborne launch platform significantly reduces the risk of costly delays or cancellations.

Springboarding off of a successful X-Prize win, a consortium including primarily Microsoft co-founder and space visionary Paul Allen and aerospace design legend Burt Rutan set out to revolutionize access to low-earth orbit. They brought on Scaled Composites, the "bleeding edge" aerospace design and manufacturing institution that once belonged to Rutan but is now owned by Northrop Grumman, as well as Elon Musk's Space-X and ex NASA Administrator Mike Griffen to make the dream take flight. Some partners have come and gone, including Space-X, but Paul Allen especially has held the course, and Stratolaunch is now under "Vulcan" banner that adorns the majority of his companies.

The right side fuselage of the Stratolaunch mothership includes the cockpit, while the left-hand side contains the aircraft's flight data systems and payload control. The giant jet can carry a single, large second stage and payload, or multiple smaller second stages and payloads, which means it can inject multiple craft into different orbits on a single mission. It can also use runways around the world to do so, which greatly saves on transportation costs, allows for cheaper rockets, and speeds up the launch process significantly. Stratolaunch is eyeing Sierra Nevada's chronically underestimated Dream Chaser, or a slightly scaled-down version of it, as a versatile launch vehicle in addition to more traditional second-stage rockets.

Stratolaunch leverages the mothership and parasite concept, where an aircraft stands in as a traditional rocket's first stage by hauling a second stage rocket and its payload up to the stratosphere before sending it on its way into orbit. The basic concept is far from new, with the military and the civilian world toying with it for decades. Orbital Sciences and their L1011 named Stargazer, along with their Pegasus rocket, have been actually doing it for years now. What's different with Stratolaunch is the scale of the mothership and the size of payloads the system will supposedly be capable of putting into orbit. Still, Orbital Sciences has tons of experience in the space, and joined the conglomerate in 2012 after Space-X dropped out.

You may notice that Stratolaunch looks a lot like White Knight, which was part of the system that won the X-Prize, and White Knight II, the aircraft that carries Virgin Galactic's Spaceship Two into the sky. That's because all of them are products of Scaled Composites, and have their roots in Rutan's designs. They also all use a similar concept for spaceflight, relying on a mothership to do the heaviest lifting before sending a rocket-powered spacecraft on its way towards the heavens.

You can read all about the use of motherships to put payloads into orbit here.

There are clearly major military applications for a system like this as well, and the Pentagon is already working on a two-stage to orbit rocket plane capable of delivering smaller payloads, and other highly classified systems that use an aircraft as a first stage could be in development as well. China is also seeking a similar capability, which is likely the driving factor behind their acquiring of the An-225 Mriya design.

If Stratolaunch proves successful, it is likely the Pentagon will become one of its best customers. Saving money and lowering the risk of launches for reconnaissance and communications payloads is clearly a good thing, but being able to quickly deploy multiple satellites on various orbits could offer a resilience to an enemy's anti-satellite capabilities. It could also work as a mothership for deploying America's own anti-satellite systems, like those capable of jamming, blinding or even manipulating and destroying enemy satellites in orbit.

It is even possible that the USAF could actually procure a Stratolaunch system for its own exclusive use, whose mission would go beyond acquiring rapid and cheap access to low-earth orbit. Time sensitive strike is a very big deal these days—being able to strike any target on the globe in a matter of minutes, not hours. Stratolaunch could work as an alert mothership loaded with suborbital missiles that are capable of streaking around the globe and pulverizing time sensitive enemy targets. Buy adapting an off-the-shelf technology, like Stratolaunch, the Pentagon could save billions in development costs and years of research time.

Stratolaunch is slated to take its first flight later this year, and Allen and crew think the Stratolaunch system will be fully operational by the end of the decade.