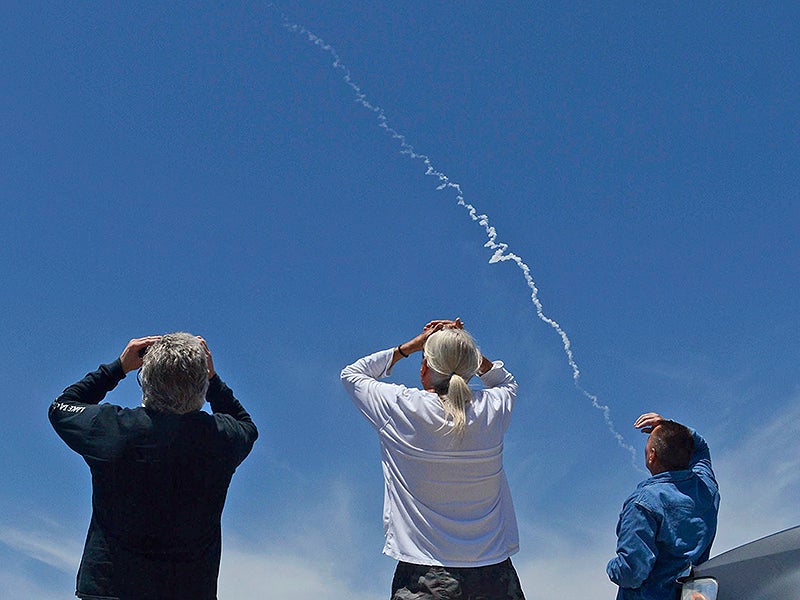 Today's high stakes launch of a ground-based midcourse defense (GMD) interceptor against an intercontinental ballistic missile (ICBM) target, the first test of its kind, has been deemed a success by the Missile Defense Agency. The missile was launched from Ronald Reagan Ballistic Missile Defense Test Site on Kwajalein Atoll, some 4,200 miles away from Vandenberg AFB, where the GMD interceptor was fired off.

In a statement released to reporters, the Missile Defense Agency stated:

During the test, an ICBM-class target was launched from Reagan Test Site on Kwajalein Atoll in the Republic of the Marshall Islands. Multiple sensors provided target acquisition and tracking data to the Command, Control, Battle Management and Communications (C2BMC) system. The Sea-Based X-band radar, positioned in the Pacific Ocean, also acquired and tracked the target. The GMD system received the target tracking data and developed a fire control solution to intercept the target. A ground-based interceptor was launched from Vandenberg Air Force Base, California, and its exo-atmospheric kill vehicle intercepted and destroyed the target in a direct collision.

"The intercept of a complex, threat-representative ICBM target is an incredible accomplishment for the GMD system and a critical milestone for this program," said MDA Director Vice Admiral Jim Syring. "The System is vitally important to the defense of our homeland, and this test demonstrated that we have a capable, credible deterrent against a very real threat. I am incredibly proud of the warfighters who executed this test and who this system everyday." Initial indications are that the test met its primary objective, but program officials will continue to evaluate the system performance based upon telemetry and other data obtained during the test.

We'll have to wait and see if any more details are released about the test, and what exactly a "threat-representitive ICBM target" is. ICBMs aren't a monolithic capability. More advanced models are capable of deploying multiple types of confusing decoys, and can even alter trajectory suddenly in flight. This is where target discrimination and the kill-vehicle's ability to adapt on the fly comes into play. In fact, the whole GMD system would be taxed far heavier against an advanced threat than a simple one.

The test also underlines how the GMD system still relies on some lumbering, one-off assets that are not always deployed—namely the Sea-based X-band radar and possibly the shy armada of other radar ships that participate in these intercepts. Hopefully strides can now be made to make the system less dependent on these impersistent sensors so that it truly can respond to an attack at any given time.

Chris Johnson, a spokesman for MDA, would not confirm that the trajectory of the target in the Tuesday test was given to the intercept team, but said that Vandenberg had a "general launch window."

Although today's test was a meaningful step in the right direction, as suspected, we are still a ways off from testing this system under real-world conditions.