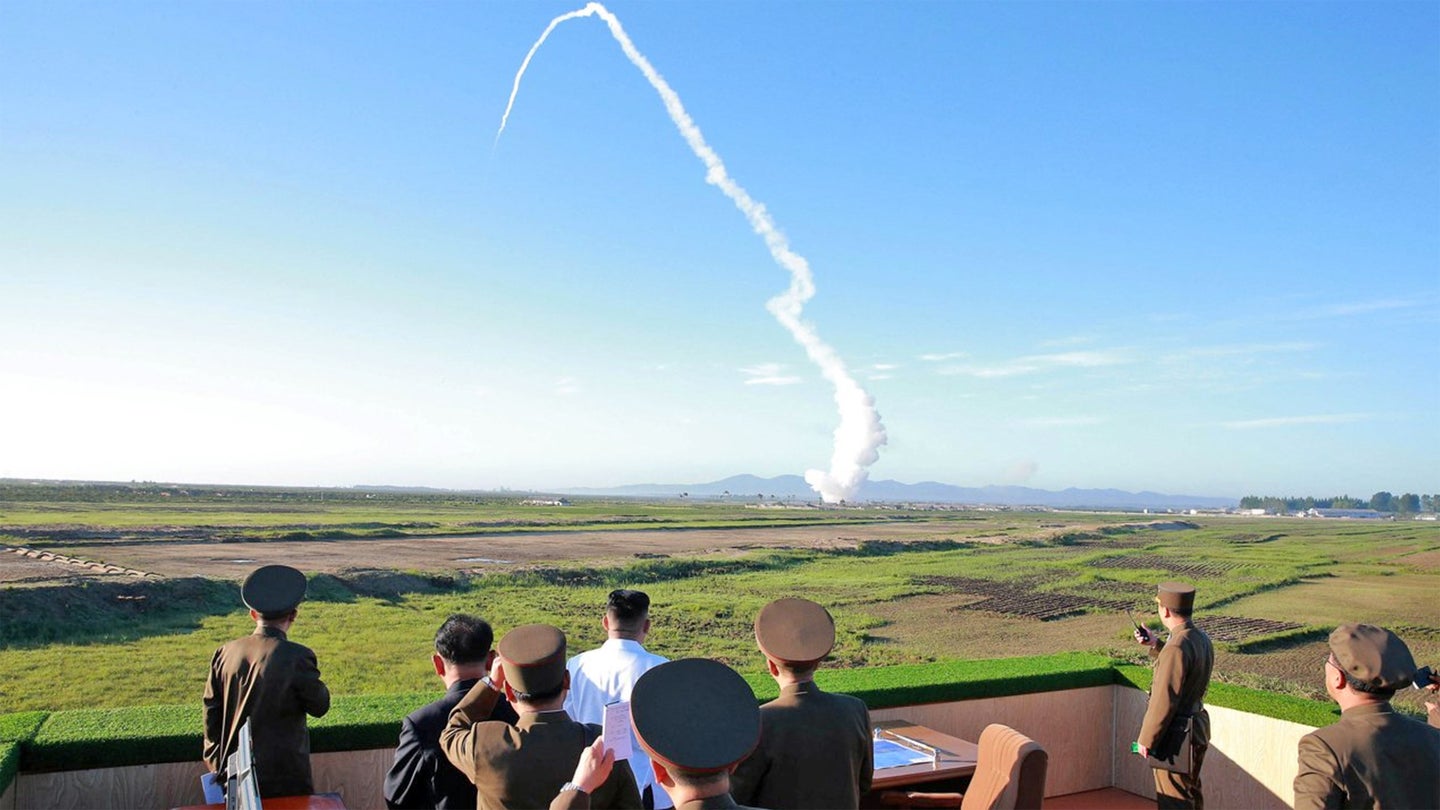 Another weekend, another round of North Korean missile tests. But this time Pyongyang fired off a surface-to-air missile from its shadowy KN-06 air defense system, as well as another ballistic missile.

The firing of the KN-06, also known as the Pongae-5, is significant as it demonstrates North Korea's drive to update its defensive capabilities significantly in addition to its rush to validate its nuclear deterrent. The KN-06 is an interesting system in particular because it represents the pinnacle of North Korea's anti-air capability—one that could prove troublesome for South Korean and American aircraft during a time of war.

The KN-06 is based on the Chinese HQ-9 system, which itself is based on the Russian S-300 air defense system. Although the KN-06 was first unveiled nearly seven years ago, it is thought to still be in testing to some some degree. But just like North Korea's ballistic missiles, Pyongyang seems to have prioritized its development and validation in recent months, executing multiple test launches. Now, after yesterday's highly publicized firing, North Korea says the system is ready for mass production and wide-scale deployment. The same was said after another successful launch of Pyongyang's KN-15 road-mobile intermediate-range ballistic missile just a week and a half ago.

North Korean state-ran media quoted Kim, who made one of customary visits to the high-profile test, as stating:

"Some defects in the weapon system, discovered last year, were perfectly overcome to stand the test... This weapon system, whose operation capability has been thoroughly verified, should be mass-produced to deploy in all over the country like forests so as to completely spoil the enemy's wild dream to command the air, boasting of air supremacy and weapon almighty."

The system uses what appears to be an indigenous version of the mobile 5N63 "Flap Lid" phased array radar, and likely has capabilities somewhat akin to later versions of the S-300P SAM system. This earlier version of the S-300 series of air defense systems could track and engage four targets at the same time, while later versions could track 12 and engage six. The range of the system's missiles is uncertain, but something between 60 and 90 miles is likely. The test launch is thought to have occurred form Sondok Air Base near North Korea's central east coast.

It is highly improbable that the KN-06 possesses all the capability of more advanced generations of the S-300 system, including their enhanced processing power and updated sensors that drastically increase the number of targets these newer systems can track and engage at one time, not to mention more capable on-board missile electronics that better each missile's probability of a kill. Still, the KN-06 represents a huge leap over the geriatric SAM systems in North Korea's inventory (SA-2, SA-3, SA-5 etc). Also, because it is road mobile, and can take advantage of the huge number of hardened bunkers, caverns and other "scoot and hide" installations that dot the North Korean countryside, targeting KN-06 batteries would be far more of a dynamic job compared to North Korea's SAM systems that are set up at fixed positions.

So does this system represent a massive threat bordering on an anti-access capability for Pyongyang? No. But it is the high-end of North Korean air defense capabilities, and in the hands of capable operators using wily tactics, it would be a threat that would need to be actively confronted during a conflict. With this in mind, if North Korea puts the system into large-scale production and deploys it accordingly, it will have to be factored in to allied war plans, with major changes to the electronic warfare and a Wild Weasel/SEAD/DEAD order of battle being made to counter it.

The KN-06 also serves as yet another reminder of what some of us have been saying for a long time—do not underestimate the North Koreans. Sure their propaganda is hokey and most their equipment and infrastructure is sorely dated, but that doesn't mean they are stupid. Just look at what they have accomplished in the last year technologically, a feat that many said was impossible in the recent past. On top of that, dedicated and creative fighters, who are fighting for their own country on their own turf, can make even antiquated weaponry deadly, and the KN-06 is far from ancient to begin with.

You can see the KN-06 system, including radar, command vehicle, and TELs. Advance to 1:14:00 if the vide doesn't advance automatically:

The development of the KN-06 also has clear cross-over benefits technologically with North Korea's ballistic missile programs. There are particular synergies with guidance and especially launch systems between the two very different types of missile concepts. North Korea's mastering of the "cold launch" system, where compressed gas expels the missile before its own rocket motor ignites in mid-air for climb out, likely came from examination of more modern Russian designed air defense systems and their Chinese clones. As did the missiles' solid fuel propulsion systems. This knowledge has enabled their submarine ballistic missile program and gave birth to the KN-15, which is really their most credible and capable ballistic missile at this time. The KN-15 which is based on the KN-11 submarine-launched ballistic missile that has been tested aboard the country's single Simpo class submarine. The War Zone reported the following last February shortly after the first known successful KN-15 launch:

"Cold launching is a hard capability to master, but if perfected it can result in a lighter, longer-ranged missile that can be deployed very quickly, as well as a less weighty TEL. Cold launches also feature a “cleaner” launch sequence with less localized impact, and allows for launches in tighter spaces. On the other hand, if the missile’s fuel and rocket systems are not reliable, a cold launch of a solid-fueled missile can be more dangerous than a liquid-fuel missile that uses the hot launch method. This is because once the missile is ejected during a cold launch, if its motor fails to start as timed it will fall back down on the TEL and explode. Cold launch systems can also have wind limitations as well..."

When it comes to North Korea's ballistic missile program, this weekend was also eventful. Pyongyang followed the KN-06 launch Saturday with a ballistic missile launch on Sunday. The missile was fired from Wonsan on North Korea's eastern coastline and flew some 260 miles, impacting the water within Japan's exclusive economic zone where shipping and fishing are especially prevalent. The reaction has been the same as always with critical statements being released by Pacific Command, Tokyo and Seoul. It seems that this time the missile was of the short-range variety but we will have to wait till more data is released to better understand its capabilities and type.