Footage shows dozens of trucks in a tight column on the receiving end of an aerial barrage. 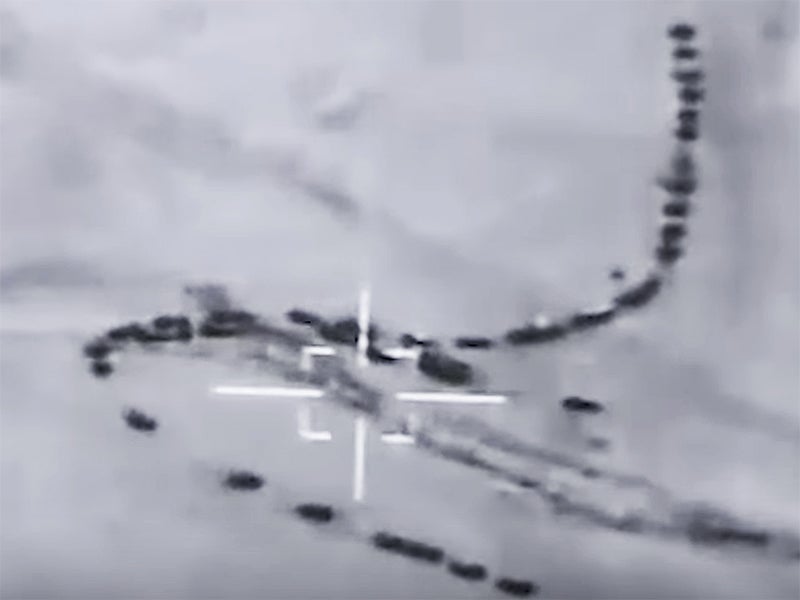 Syrian state-run SANA news reports that Russian aircraft attacked a column of 39 armed trucks carrying loads of ISIS fighters out of their increasingly surrounded defacto capital of al Raqqa. The convoy was supposedly on its way to the ancient and contested city of Palmyra when the first strikes hit. Russia claims 120 ISIS fighters were killed in the air raid.

Video has been distributed showing a montage of airborne infrared video of the column of vehicles and a couple of weapons strikes. The footage was likely recorded by Russian drones. A longer video has also been posted showing an attack helicopter firing a missile at a vehicle as well as other imagery, including the aftermath of the attack. Whether or not this extra video is authentic or not is not clear at this time.

It seems as if the strikes actually took place southwest of Palmyra, in the eastern reaches of Homs District. That doesn't necessarily mean that the convoy wasn't trying to make it to Palmyra as various checkpoints are set up along Syria's desert highways, and different areas along a single road can be controlled by various factions, so round-about methods of travel are not uncommon. Also it seems as if the convoy was headed into mountainous terrain when the Russian aircraft pounced.

If this large line of vehicles did indeed originate from al Raqqa, it is a bit surprising that they weren't identified and attacked by US-led coalition forces. The skies over and around the ISIS stronghold are buzzing with surveillance aircraft, sometimes including coalition assets uniquely suited for detecting large mechanized columns moving on roadways, such as anything with a radar that is capable of ground-moving target indicator (GMTI) functions.

It may be that there simply weren't any of these assets on patrol at the time the convoy moved out. Additionally, even if it was detected, coalition strike aircraft may have been unavailable to attack it. With this in mind, it is possible that even if the US knew about the convoy, it had made its way into Russia's area of responsibility in western Syria by the time the coalition could attack, and the information was passed along. Then again, aside from the possibility it slipped by coalition sensors, maybe it never actually originated from al Raqqa as claimed. We also have no confirmation outside of the Damascus-Moscow narrative that this convoy was indeed made up of ISIS fighters, but if it wasn't we probably would have heard by now.

We'll have to wait and see if more information is released as to exactly how this convoy was targeted and what aircraft struck it. Also, we don't see the whole column destroyed in the video. Maybe it just wasn't shown or it's possible that there were limited attack assets available to strike it, and those assets chose to make a series of "bookend" strikes to trap the convoy from proceeding—basically stranding it in mountainous terrain. Once things started exploding, it is likely ISIS fighters abandoned their vehicles anyway. This tactic has been used many times in the past, including on the famous Highway of Death at the end of Operation Desert Storm, and the most recent Highway of Death-like assault made on ISIS as they retreated from Fallujah.