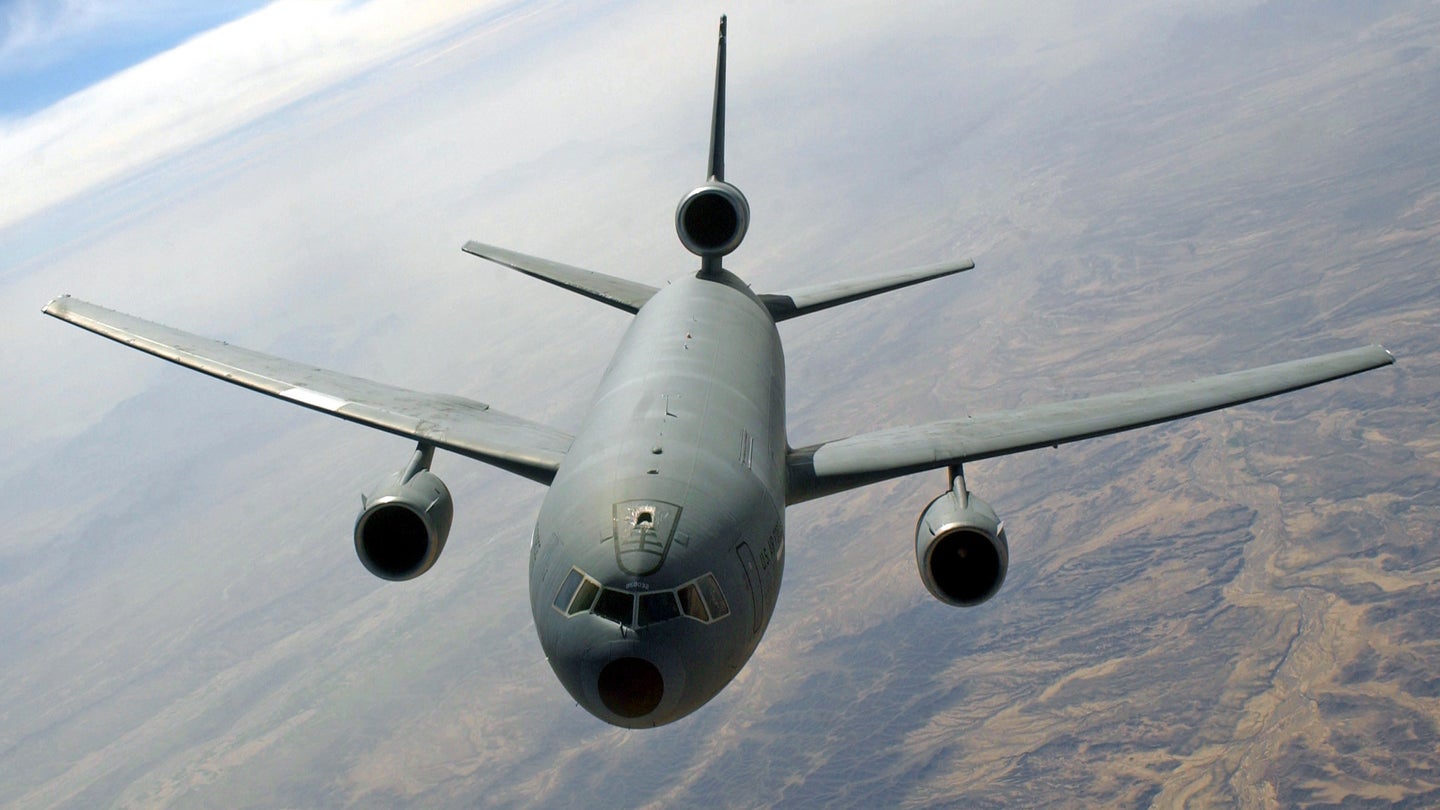 Two weeks ago, a KC-10A Extender was flying over Syria when a Russian fighter aircraft, presumably a Flanker derivative (Su-30, Su-34 or Su-35), intercepted it. The fighter then executed a barrel roll over the top of the big aerial tanker. This led to the US classifying the incident with the all too common "unprofessional intercept" moniker.

In a fairly rare move, the Russians actually apologized for their fighter pilot's behavior. General Jeffrey Harrigian, who commands USAF assets in the middle east, told reporters: "We had one incident where there was an intercept they ran that I would categorize as unprofessional, and we called them on it and expressed our concern. They came back, quite frankly, and apologized for that particular intercept."

News of this intercept comes just days after a very similar event occurred over the East China Sea between a Chinese Flanker derivative and a USAF WC-135C Constant Phoenix air sampling aircraft. In that case, the fighter pilot also executed a barrel roll over the top of the lumbering Air Force jet. Intercepts between Russian and US, and allied aircraft are common, especially near strategic borders, but these types of encounters have been either less frequent or less publicized in the convolutes skies over Syria.

That's not to say that there haven't been persistent encounters between Russia, Syrian and coalition aircraft over Syria. Russian and US fighters have crossed paths numerous times before. Additionally, America's massive drone presence over the country has drawn unique interest from Russian pilots. F-22s have even tailed Syrian fighters around without their aircrews even knowing they were there. Suffice it to say that the skies over Syria are not a lonely place.

"We have had to increase the amount of de-confliction work we are doing with the Russians given the tighter airspace that we are now working ourselves through," General Harrigian added. He is referring to a hotline set up between the coalition's Combined Air Operations Center at Al Udeid Air Base in Qatar, and Russia's airbase south of Latakia, Syria. The hotline went dead following America's cruise missile attack on Syria early last April, but is back online now. The hotline is thought to also have connectivity to US commanders in Baghdad.

This emergency communications link, which was officially setup along with a common set of protocols after talks direct between US Secretary of Defense Ashton Carter and Russian Minister of Defense Sergey Shoygu nearly a year and a half ago, has been used numerous times to various levels of success.

The most recent high-profile use of the hotline occurred on May 18th, when a convoy of Shiite militia fighters were rumbling headlong towards a base where Free Syrian Army forces are trained and equipped by US Special Operations personnel. Coalition aircraft ended up turning the stream of vehicles, which included tanks, into rubble after repeatedly trying to warn them to stop their advance.

What remains an unknown is where exactly the intercept of the KC-10 took place. Western Syria is largely left to Russian and Assad's air power, while over eastern Syria the US-led coalition dominates the skies. Following the Tomahawk missile attack on Assad's airfield, this separation, which was already well defined, has become even more formal, although it is still technically unofficial. With this in mind, it would be interesting to know where precisely the KC-10 was when the incident occurred. It is highly unlikely a vulnerable asset like a tanker was flying over western Syria. So did Russia's fighter make an excursion east or was there a pressing reason to bring a tanker farther west, near Russian and Assad's airspace?

We may never know, but considering the apology from Russia, it is more likely the fighter was out of place than the tanker.