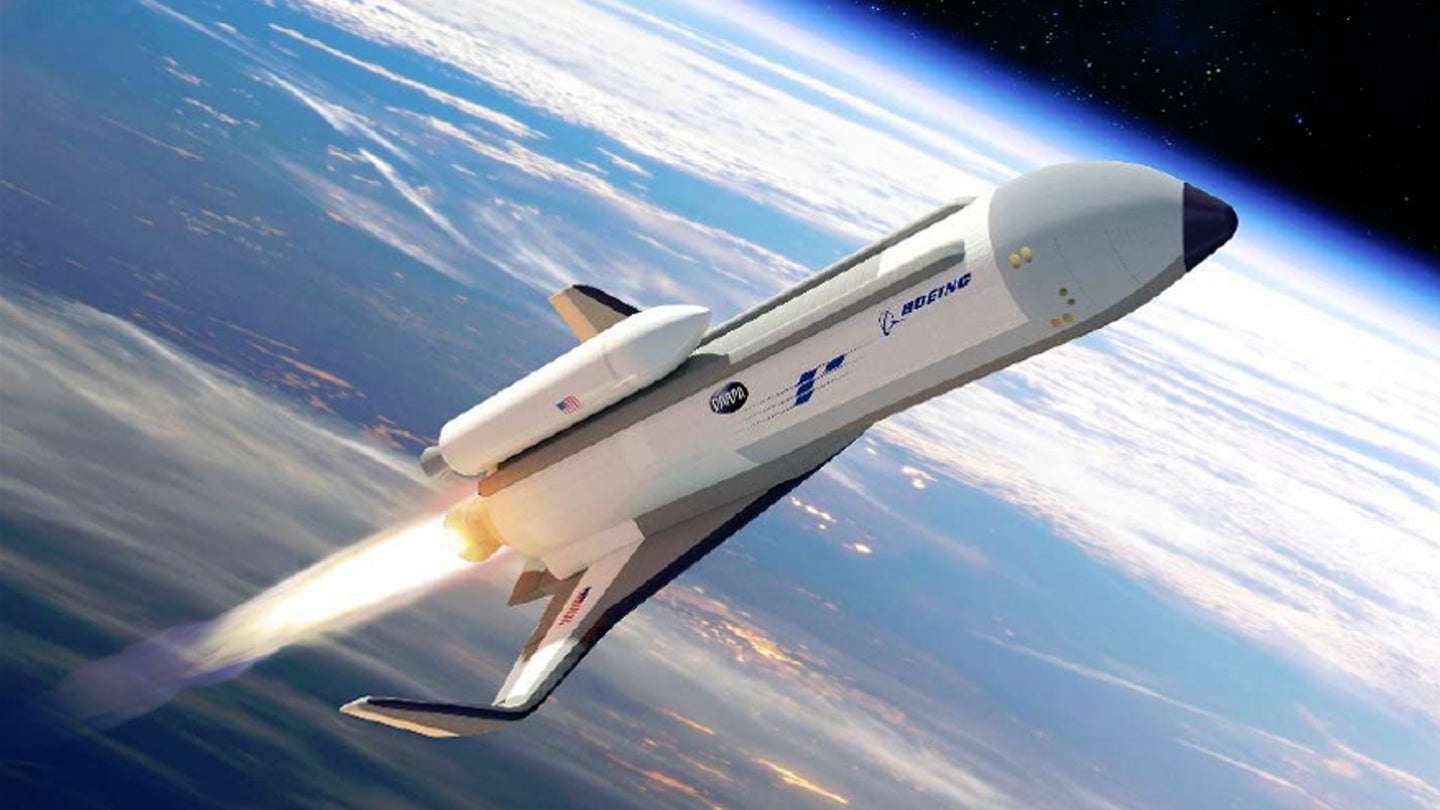 The Pentagon’s top research arm is moving ahead with a project to develop an experimental, reusable space plane. The U.S. military hopes the new design will help reduce the costs of launching satellites into space and dependency on foreign suppliers for space missions.

On May 24, 2017, the Defense Advanced Research Projects Agency (DARPA) announced it was partnering with Boeing to build the prototype for its unmanned XS-1 space plane program. The Illinois-headquartered firm won the contract with a design it calls Phantom Express.

DARPA and Boeing plan "to build and fly the first of an entirely new class of hypersonic aircraft that would bolster national security by providing short-notice, low-cost access to space," the military research and development organization said in a press release. "The program aims to achieve a capability well out of reach today – launches to low Earth orbit in days, as compared to the months or years of preparation currently needed to get a single satellite on orbit."

The primary requirement for the XS-1 technology demonstrator is the ability to loft a 3,000 pound expendable payload into low earth orbit, an altitude of anywhere between 99 and 1,200 miles, at a cost of no more than $5 million per launch. According to DARPA, this is roughly 10 times less than what the U.S. military spends on similar space missions.

More importantly, the Pentagon wants “aircraft-like” performance, with the ability to conduct at least 10 flights in as many days. There is significantly more time involved when planning and preparing to launch a traditional rocket. An animated artist’s concept of the cycle of operation has the XS-1 taking off vertically, without the need for a large booster rocket, but landing like a conventional airplane, much like NASA’s now retired Space Shuttle. This would make it significantly more capable than the Pentagon’s super-secretive X-37B experimental mini-space shuttle, which launches on top of a conventional rocket. It’s worth noting, however, that this earlier spacecraft is another product of Boeing’s Phantom Works advanced projects office.

"The XS-1 would be neither a traditional airplane nor a conventional launch vehicle but rather a combination of the two, with the goal of lowering launch costs by a factor of ten and replacing today’s frustratingly long wait time with launch on demand," Jess Sponable, the XS-1 program manager said in a statement. "We’re very pleased with Boeing’s progress on the XS-1 through Phase 1 of the program and look forward to continuing our close collaboration in this newly funded progression to Phases 2 and 3 – fabrication and flight."

To achieve the project’s goals, Boeing intends to use the Aerojet Rocketdyne AR-22 as the main propulsion source for the Phantom Express. This is a liquid-oxygen and liquid hydrogen fueled motor based on the Space Shuttle’s main engine. A secondary booster would help propel the craft into space. This additional rocket will be expendable and house the payload. If all goes to plan, upon reaching the proper position in low earth orbit, the assembly will detach and deploy the satellite.

In theory, this launch concept should keep costs down by reducing the total number of components necessary for the craft and required for each mission. By comparison, the Space Shuttle required two external boosters to get it up to speed. These were expensive and complex enough to make it worthwhile to recover them after launch.

On top of this hybrid boost engine/payload container, DARPA and Boeing plan to make use of advanced, lightweight composite materials that will hopefully make the craft easier to shoot into space. The XS-1 design will leverage automated flight system from the Airborne Launch Assist Space Access (ALASA) program, which involved using the momentum of a manned aircraft to give an extra boost to help loft a space craft out of the atmosphere. In the ALASA concept, when the carrier plane reached a certain altitude, it would release the launch vehicle, which would use its own booster motors to propel it the rest of the way into space. The Russians and Chinese have experimented with similar concepts and it may help explain China's interest in getting the massive Antonov An-225 Mriya back into production.

It is very likely that lessons learned from the unmanned, autonomous X-37B – which has been operating for years with few official explanations of its actual mission – have gone into the Phantom Express, too. And there might be an parallel "black" project in the works at the famous Area 51 test site.

In addition to refining the design and actually building the prototype, the XS-1 program’s Phase 2 will involve ground engine tests. Boeing will have to fire the Phantom Express’ motors 10 times in 10 days to validate its basic ability to meet that requirement. DARPA expects this portion of the project to wrap up in 2019.

Phase 3 will consist of between 12 and 15 actual flight tests. This will include test missions within the Earth’s atmosphere, with and without payloads and up to speeds of Mach 5, followed by full Mach 10 demonstration flights with a “demonstration payload” somewhere between 900 and 3,000 pounds. DARPA has already broadly scheduled these experiments for 2020.

If the Phantom Express performs well, it could potentially be revolutionary. As of 2017, the U.S. military was still relying on increasingly expensive, but entirely expandable rockets that require massive dedicated infrastructure to launch. And then there’s the matter of the United Launch Alliance’s Atlas V, one of the main launch vehicles, which just so happens to use Russian-made RD-180 rocket motors. This has become increasingly politically problematic in the face of the Kremlin’s revanchist foreign policies, including active military support for armed separatist groups in Eastern Ukraine and backing the brutal dictatorship of Bashar Al Assad in Syria.

Even before Russia seized control of Ukraine’s Crimea region in 2014, the Air Force was already looking at risk mitigation strategies in case these engines suddenly became unavailable. As a result of subsequent sanctions against Russian officials and companies, the U.S. government has banned the purchase of additional RD-180s after 2022, which will ultimately lead to the use of a different engine, making this particular issue less significant. The Pentagon is interested in reducing the cost of these more conventional missions with reusable booster motors. Private companies SpaceX and Blue Origin already have such designs in development.

However, these traditional missions would still require significant lead time, potentially delaying the Pentagon from deploying critical capabilities or replacing them if something happens. If it works as intended, the XS-1 could rapidly deploy a satellite or even multiple miniature satellites with relative ease. And this may become increasingly important in the near future.

"Although many improvements have been incorporated over the decades, launch systems today have grown increasingly expensive and must be procured years in advance of launch, impacting both the affordability of launching national security payloads as well as the cost and complexity of the payloads themselves," DARPA explains in its main description of the XS-1 program. "In an era of declining budgets and proliferating foreign threats to U.S. air and space assets, routine, affordable and responsive access to space is essential to enabling new military space capabilities and rapid reconstitution of space systems during crisis."

The notion of an enemy taking out satellites in preparation for a larger attack might sound like something out of a Hollywood blockbuster or a videogame, but for the Pentagon it’s becoming an increasingly real concern. If the U.S. military were to lose its GPS coverage for even a brief time, it could hamper troops ability to operate or drop precision bombs on target. Knocking out early warning satellites could blind American forces to incoming attacks. The War Zone's own Tyler Rogoway has kept a close eye on these developments and wrote this in December 2016:

In December 2016, Russia conducted the fifth test of its PL-19 Nudol anti-satellite missile. Nearly a decade earlier, China conducted its own anti-satellite test. There is a growing potential for dual-use satellites, which could perform peaceful functions like repair other man-made objects in space or simply attack them, as well. Between 2013 and 2015, Russia launched three odd craft that seemed to fit this description, able to make dramatic movements and effectively follow other satellites. They went dormant for a period, but appeared to “wake up” in April 2017.

U.S. military officials are finding themselves struggling just to come up with what a war looks like in space to begin with, especially when it might involve top secret orbiting objects. "It’s really difficult to go ahead and justify how you might attack somebody’s homeland if they’ve taken out a satellite that you don’t even admit exists," Douglas Loverro, then deputy assistant secretary of Defense for space policy, said during a talk in October 2016. "Probably people are going to die on the ground where nobody’s going to die in space."

"Is jamming an attack? Is a laser an attack? Does it have to be a kinetic hit on a satellite to be an attack?” Loverro continued. “That is not even settled in international law and probably won’t be for a long time."

Whatever the final legal framework is, with a fleet of XS-1s, the Pentagon would be able to replace any lost spacecraft quickly. And there’s always the possibility the U.S. military could modify Phantom Express to go on the offensive itself.