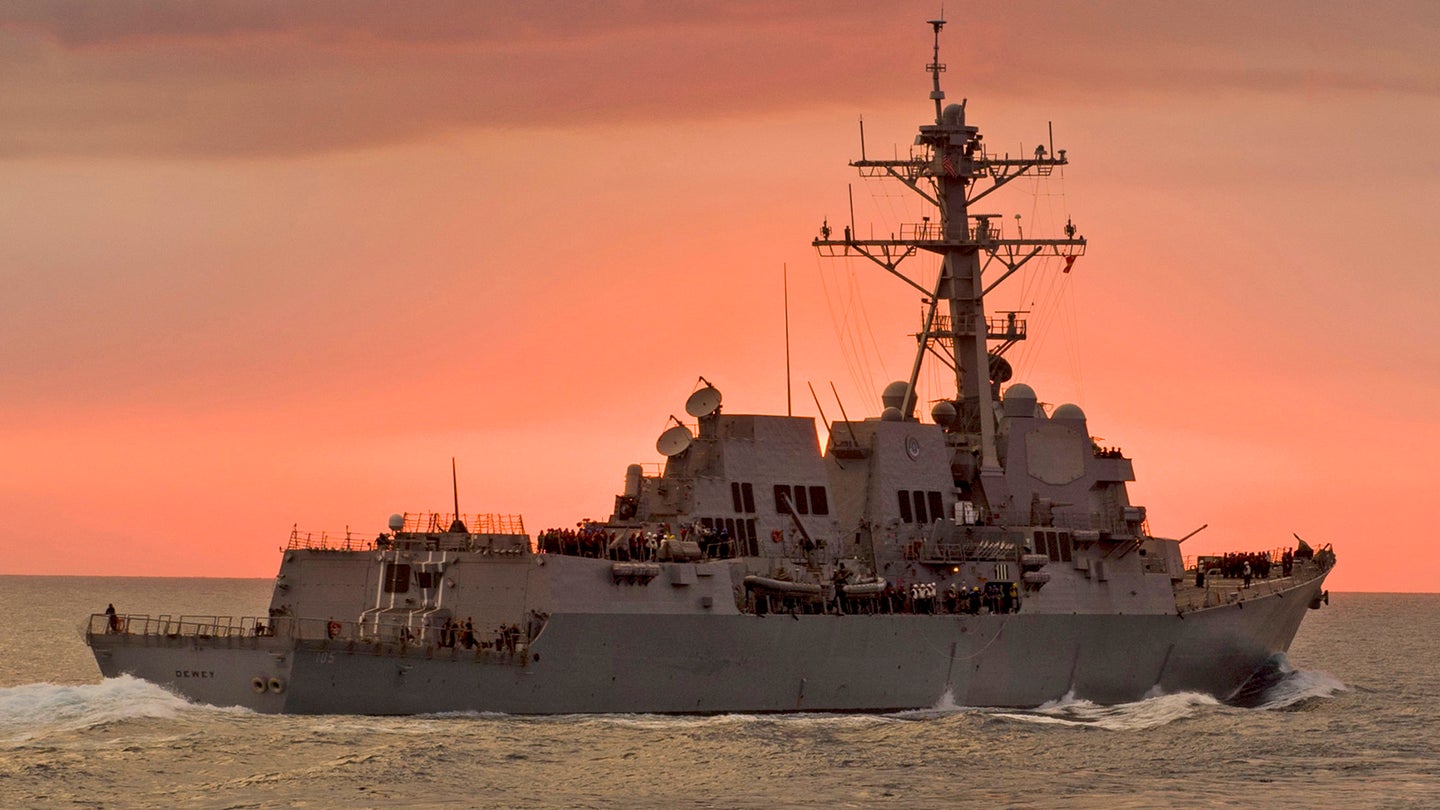 The US Navy just executed its first freedom of navigation operation (FONOP) in South China Sea since late last October. The Arleigh Burke class destroyer USS Dewey (DDG-105) made its way inside 12 nautical miles from the Mischief Reef—one of China's largest man-made island redoubts in the Spratly Island Archipelago. The built-up reef features a runway long enough to operate most anything in the PLAAF's inventory, and the airfield's dispersals are being outfitted to house fighters, as well as visiting bombers and maritime patrol aircraft. Additionally, like China's other bases in the area, Mischief Reef is also being increasingly armed with heavy weaponry.

The first US Navy FONOP that targeted China's dubious territorial claims in the South China Sea occurred in October of 2015. The last mission happened a year later, in October of 2016. That was under the Obama administration, and some of these operations resulted in some intense encounters.

Tensions soared even higher towards the last days of Obama's second term when the Chinese plucked a submersible research glider from South China Sea waters. That innocuous device was quickly returned, but it set a grim stage for an incoming President that had already spouted some heavy rhetoric towards Beijing during his campaign—including calling out China's designs on the South China Sea and their man-made island bases under construction there.

Surprising to many, and frustrating to some, the Trump administration has been largely silent on the South China Sea issue since taking the White House in January of 2017. Even after meeting extensively face-to-face with China's President Xi Jinping at Trump's own resort in Florida, the topic seemed to be all but off limits. The reason why was made fairly clear by Trump himself on numerous occasions—he didn't want to upset the already tenuous US-Chinese relationship while he was trying to get China to reel-in an increasingly belligerent and more frighteningly armed North Korea.

The strategy makes some sense, although it has ruffled the feathers of some hardliners that see China as an untrustworthy strategic partner on pretty much any level, and who continue to classify Beijing's claims in the South China Sea as akin to a major threat to international commerce, hemispherical stability, and to the general notion of sovereignty in the region overall. Even The Philippines , which just recently seemed to becoming increasingly submissive to Beijing's will in the South China Sea, is making a new push to fortify its own claims there. This comes as President Trump and The Philippines eccentric new President Rodrigo Duterte seem to be forming a budding relationship.

Although there have been signs that China has put pressure on Pyongyang to cease with rampant missile tests and nuclear threats, not much has come of it. And the good will between Trump and Jinping may be showing signs of decay. Just last week a Chinese Su-30 executed a dangerous intercept on a USAF WC-135C atmospheric testing aircraft—an encounter that included the Flanker derivative going inverted atop the lumbering surveillance aircraft.

It is very possible that this FONOPS mission was a response to that incident, and is once again, a signal that the relationship between Beijing and Washington may be starting to cool to Obama era temperatures. We'll have to keep an eye on the situation for further indicators.

This latest FONOPS drill also comes as Japan's largest warship has sailed into the South China Sea and is undergoing international drills with nearby Vietnam and the US. Vietnam sees China's territorial grabs in the crowded body of water as a major threat.

If anything else, sending USS Dewey into China's claimed territorial waters around Mischief Reef definitely puts the whole South China Sea issue back to the diplomatic forefront for both countries.