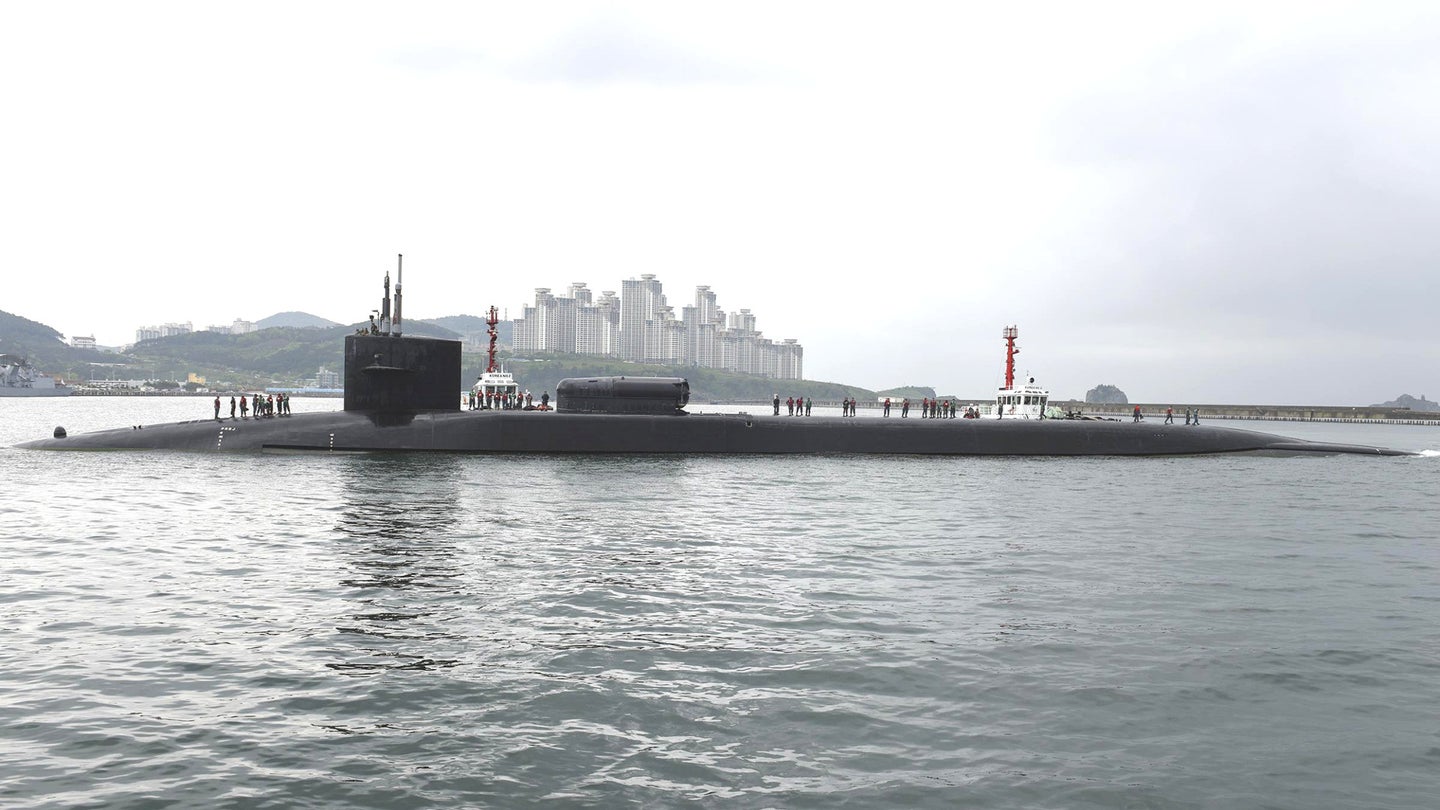 The United States may have two nuclear submarines positioned near North Korea, able to strike at the reclusive regime if necessary. These details emerged thanks to a confidential transcript of a phone call between President Donald Trump and his counterpart in the Philippines, Rodrigo Duterte. The document raises additional questions about Trump’s handling of sensitive information, as well as the possibility of a potential strike against Pyongyang’s military or government.

On April 29, 2017, Trump called Duterte ostensibly to commend the Philippine president on his violent and controversial war on drugs, in which police have killed thousands of Filipinos, mostly addicts and small-time dealers. The freewheeling discussion quickly turned to other topics, including North Korea and its leader Kim Jong Un.

“He [Kim Jong Un] is playing with his bombs, his toys and from the looks of it, his mind is not working well and he might just go crazy one moment,” Duterte says at one point near the end of his chat with the American president. “We have a lot of firepower there,” Trump responds, apparently unprompted.

“We have two submarines – the best in the world – we have two nuclear submarines – not that we want to use them at all,” he continues, according to the transcription. “I’ve never seen anything like they are but we don’t have to use this but he could be crazy so we will see what happens.”

Anonymous sources leaked the transcript, an official Philippine Department of Foreign Affairs document that is marked confidential and has a security cover sheet, to various news outlets on May 23, 2017, according to The New York Times. Additional unnamed individuals confirmed its contents as “an accurate representation of the call.” The Intercept subsequently posted a complete copy of the document online.

Though the conversation occurred in private, the comments are in line with the Trump administration’s increasingly stern rhetoric with regards to increasingly worrisome North Korean provocations. Since January 2017, the regime in Pyongyang has conducted nearly a dozen ballistic missile tests – including firing significantly more advanced and heretofore unseen types than in previous years – and made apparent preparations for sixth nuclear test, all in defiance of existing international condemnation and sanctions. Since the beginning of April 2017, North Korea has averaged almost one missile launch every week.

The “era of strategic patience is over,” Vice President Mike Pence said on April 17, 2017, while making a surprise visit to the heavily fortified Demilitarized Zone separating North and South Korea. “We want to see North Korea abandon its reckless path of the development of nuclear weapons, and also its continual use and testing of ballistic missiles is unacceptable.”

But it should go without saying that U.S. officials disclosing even the relative position of U.S. Navy submarines, regardless of the circumstances and the parties involved, is highly unorthodox at best. America’s submarines are nicknamed the “silent service” for a reason. Their ability to operate all over the world, performing missions ranging from routine patrolling to intelligence gathering, all without giving away their location is their greatest strength. This ability to quietly move into a particular area and potentially strike without warning makes them a very credible deterrent threat.

The transcript immediately sparked criticism and concern about the president’s attitude toward discussing sensitive information. Trump had already provoked outrage among politicians and pundits by apparently disclosing top secret intelligence from an Israeli source during a meeting with Russian Foreign Minister Sergey Lavrov and Russia’s ambassador to the United States Sergey Kisylak. In an attempt to push back against those reports, in a joint press conference with Israeli President Benjamin Netanyahu, Trump insisted he hadn’t specifically mentioned Israel during the incident. This admission only seemed to confirm that he had discussed the highly sensitive source of information with the Russian officials.

And this isn’t the first time Trump has drawn flak of for his open discussion of military matters by talking about the presence of submarines in the region. In April 2017, he mentioned them specifically as part of a force the United States was sending in a show of force to North Korea during an interview with FOX Business Network reporter Maria Bartiromo.

The carrier in question was the USS Carl Vinson, whose precise location became a news story in its own right after a series of confusing statements from the Trump Administration and the Navy about where it was headed and when. The submarine issue got lost amid those reports. Now there is a concern that their presence in the area is yet another indicator the Trump administration is still actively considering a military strike on North Korea.

To be fair, Trump did not appear to tell Duterte exactly where the submarines were, what type of boats they were, or exactly what sort of weaponry they had on board. Based on publicly available information, we can’t say for sure what subs he was talking about or if they are still in the vicinity of North Korea nearly a month later.

One was almost certainly the USS Michigan, an Ohio-class missile submarine, which arrived in South Korea’s port city of Busan on April 25, 2017. The Navy described this stop as “a routine visit during a regularly scheduled deployment to the Western Pacific.” This isn't the first time the sub has made a stopover in South Korea. In addition, though the majority of the Ohios carry 24 Trident II nuclear-tipped intercontinental ballistic missiles, Michigan is one of four converted to only fire conventional Tomahawks instead. These boats carry a massive load of 154 of the land attack cruise missiles. On top of that, Michigan is on the Ohio-class vessels to carry the Dry Deck Shelter, which allows it to deploy special operations forces and their swimmer delivery vehicle mini-subs.

The other submarines might be a Los Angeles-class attack boat, which routinely accompany carrier groups, such as the one escorting the Carl Vinson. The vessels also conduct independent patrols and the Navy’s Commander, Submarine Group Seven oversees the activities of four Los Angeles-class attack subs in the Western Pacific from Apra Harbor on the island of Guam.

Though their primary job is to attack enemy ships, each Los Angeles can fire Tomhawks. Early boats could launch the missiles horizontally through their torpedo tubes, but more recent members of the class have a dozen vertical launch cells that can accommodate either the cruise missiles or Harpoon anti-ship missiles.

All of this would seem to imply the U.S. military is prepared for a very limited strike against North Korean nuclear or missile facilities, akin to the American strike on Syria’s Shayrat air base in April 2017. In that case, the Trump administration chose to employ Tomahawks, too. At the time, the War Zone took a hard look at the decision to employ cruise missiles in that mission.

Unfortunately, Pyongyang employs hardened structures, deep caves, and similarly difficult to reach sites in order to protect its most sensitive military assets. It seems unlikely the Tomahawk would be a good choice for attacking those nuclear and missile sites. Launched in close proximity, the missiles could be useful for time-sensitive strikes, driven by information from Washington's massive intelligence infrastructure spying on North Korea, to hit Pyongyang's missile forces while they're still moving into position and preparing to fire. This would work best against the country's liquid fueled missiles, which take significantly longer to get ready to launch than solid-fuel types.

However, during his phone call, Trump seemed to bring up the possibility of a nuclear attack on North Korea. “We can’t let a madman with nuclear weapons let on the loose like that,” he told Duterte. “We have a lot of firepower, more than he has, times 20 but we don’t want to use it.”

The Navy does keep a number of Trident-equipped Ohios on “hard alert, in their patrol areas, awaiting orders for launch," Stephen Schwartz, an expert on nuclear proliferation issues and editor of Atomic Audit: The Costs and Consequences of U.S. Nuclear Weapons Since 1940, told Business Insider. “We don’t even know where they are – they run silent.”

Still, since the Trident II has a range of more than 7,000 miles, an Ohio-class boat wouldn’t need to be very close to the Korean Peninsula in order to be in a position to attack targets in North Korea. Based on heavily redacted copies of the Pentagon’s actual nuclear war plans that we obtained the Freedom of Information Act, the War Zone has already published a particularly detailed look about what would go into an American nuclear attack on North Korea and how any U.S. administration might arrive at that decision.

But “Trump has a disturbing tendency to talk very cavalierly about nuclear weapons — as if he is an impulse away from using them,” Joe Cirincione, an expert on nuclear weapons and head of the Ploughshares Fund, which advocates for nuclear nonproliferation and disarmament, told The Intercept. “He doesn’t seem to understand the vast destructive nature of these weapons and the line he would be crossing by using them.”

Regardless of his actual intent, as in the past, Trump’s statements are only likely to fuel the North Korean government’s victim complex and its paranoia about American attacks, which it routinely says are imminent and the reason for its nuclear weapons program, as well as lending weight to its domestic propaganda – something we've already warned about here at The War Zone. North Korea's state-run media arms already published threats to sink the Michigan and the Vinson in April 2017.

So far, the presence of any American submarines in the area has so far not deterred Kim Jong Un. Since the beginning of May 2017, North Korea has already tested two more ballistic missiles, including the off-road mobile and potentially nuclear-capable Pukguksong-2, also known as the KN-15. It is possible that the Trump administration may feel increasingly compelled to strike, whether or not subs are ultimately involved.