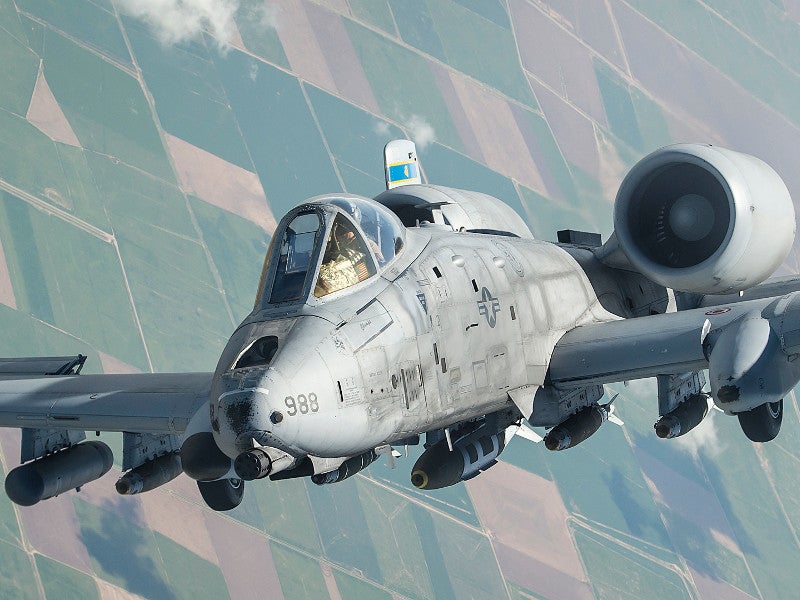 In the latest development in the ongoing saga of the A-10 Warthog, President Donald Trump’s budget proposal for the 2018 fiscal year keeps the iconic attack aircraft going for the foreseeable future, at least in theory. Unfortunately, the Pentagon’s wording makes it very clear that it will still defer to the U.S. Air Force on the fleet’s ultimate fate.

Released on May 23, 2017, the Pentagon’s overview of the proposal makes it clear that the budget they want will adequately fund the entire existing fleet of A-10s. At that time, there were just over 280 Warthogs across both the active and reserve components.

“The Air Force’s FY2018 budget request continues our emphasis on our readiness recovery, fills critical gaps, and improves lethality,” the service said in its own statement. “Sufficient funding, stable budgets, and flexibility will allow us to maintain the balance necessary to support today’s readiness and capabilities needed in the future.”

The inclusion of full funding for the A-10 is notable because the aircraft’s future was very much in doubt in 2016. The Air Force has had an at best complicated relationship with the blunt-nosed plane since the first examples entered service in the 1970s. In the face of budget caps and cuts mandated in the 2011 Budget Control Act, the service has repeatedly sought to retire all of the Warthogs ostensibly to free up funding for other more advanced aircraft, namely the F-35 Joint Strike Fighter.

This has, in turn, drawn the ire of the A-10’s supporters in Congress and the Air Force appeared to be changing direction by October 2016. “They have re-geared up, we’ve turned on the depot line, we’re building it back up in capacity and supply chain,” Air Force General Ellen Pawlikowski, head of Air Force Materiel Command, told Aviation Week at the time when asked about the support infrastructure for the Warthogs. “Our command, anyway, is approaching this as another airplane that we are sustaining indefinitely.”

However, as The War Zone’s own Tyler Rogoway noted at the time, it appeared Pawlikowski was simply hedging her command’s bets that the Air Force would fail once again in the face of Congressional backlash to send the A-10s to the Bone Yard for good. There was no indication that the service wasn’t still hoping to move ahead with its plans to slowly phase out the aircraft.

On the face of things, the Pentagon’s latest budget proposal seems to settle the argument and preserve the A-10s, which continue to prove themselves extremely valuable in combat in Iraq and Syria, as well as other deterrence missions elsewhere. Unfortunately, reading between the lines, it’s not clear how much the budget proposal actually changes things.

“Fleet strategy and viability will be assessed as the Air Force determines a long term strategy,” the Pentagon’s overview report clearly states. “We still had to make tough choices in balancing capability, capacity, and readiness while focusing on modernizing weapons systems and infrastructure,” the Air Force said about its own budget planning.

Even if the Trump’s budget passes in its current form, which is extremely unlikely, Air Force officials would be able to argue for shifting any funding set aside for the A-10s for other projects it feels they are more important. Beyond the A-10, there are other aircraft also in desperate need of upgrades and overhaul. Of course, Congress would need to approve any such decision.

More importantly, the question remains of just how the Air Force plans to deal with the larger looming issue of simply becoming unable to pay for its existing aircraft along with expensive new purchases such as the F-35 and the KC-46A tanker. Air Force officials repeatedly insist there just isn’t any money for any

new aircraft. In May 2016, it became clear that the service wouldn’t be able to maintain its fighter fleet as a whole by 2021 without a massive injection of new funds.

And that may be the bigger issue. Trump’s defense spending proposal for the 2018 fiscal year is not dramatically different from the outlays President Barack Obama and his administration envisioned for the coming years. The Trump administration has cited an increase in defense spending of more than $50 billion over Obama’s proposal for the 2017 fiscal cycle. However, the president’s new baseline defense budget is actually only approximately $18 billion more than what the previous administration already estimated would be necessary in the next fiscal year.

With this in mind, you can expect to see us look deeper into the actual budget proposal as a whole, as well as reactions in Congress and any plans to fundamentally change the final funding amounts for various systems.