It's not the first time a Chinese fighter has gone inverted over a US surveillance aircraft. 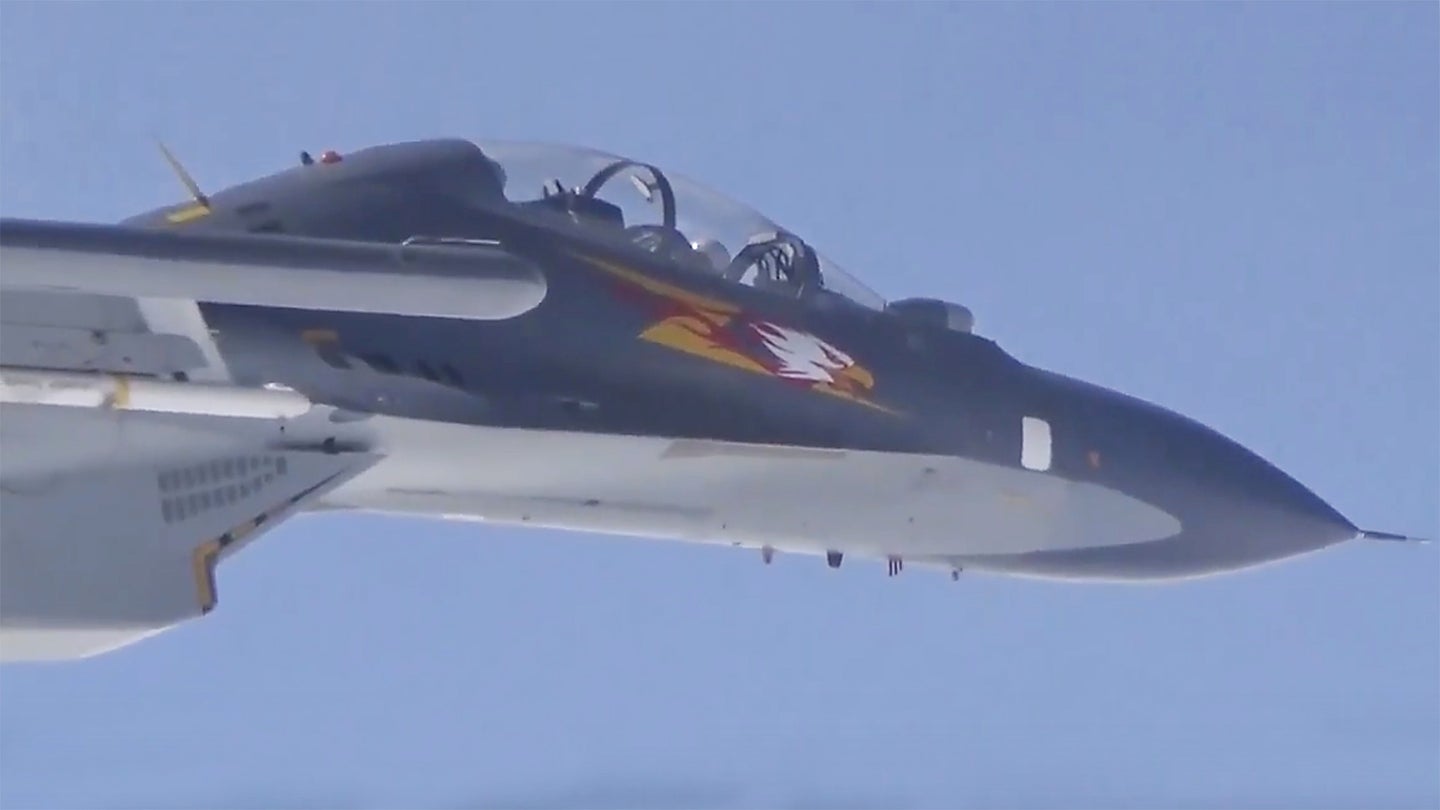 A pair of PLAAF Su-30MKK Flanker derivatives executed a lively intercept on a USAF WC-135C Constant Phoenix atmospheric sampling jet high above the East China Sea on Thursday. The WC-135 has been forward-deployed to the region in anticipation of North Korea's sixth nuclear test.

Reportedly, during the intercept one of the jets flew inverted above the WC-135, which serves no purpose but intimidation and can be dangerous, especially if either aircraft loses visual contact with the other. Then again, in most cases there isn't all that much a lumbering C-135 can do to get out of a super maneuverable Su-30s way.

US Air Force spokesperson stated the following regarding the incident: "While we are still investigating the incident, initial reports from the U.S. aircrew characterized the intercept as unprofessional. The issue is being addressed with China through appropriate diplomatic and military channels."

Of course these "unprofessional" intercepts are nothing new, but most intercepts occur without a major incident. Yet enough of them don't that the US Navy actually built an elaborate video pod to capture proof of these events. A year ago, a EP-3E Aeries electronic intelligence gathering aircraft had a particularly close encounter with Chinese J-11s near Hainan Island. That incident led to the pod's rapid development, but the EP-3, Chinese fighters, hostile intercepts and Hainan Island are key words burned into the military intelligence and foreign policy lexicon of both countries.

In 2000, a EP-3 was nearly lost after a Chinese fighter collided with it. The aircraft made a emergency landing on Hainan island with large parts of its spy systems and crypto literature intact. This international flashpoint became known as the Hainan Island Incident, and the public is still learning about the extent of its repercussions. Needless to say, the crisis is not far from American spy aircraft crews' minds when operating near a potentially hostile countries, and especially when trolling near Chinese territory.

Chinese fighters going inverted over a large US surveillance aircraft is not something necessarily new either, and Russia and China both have a particularly spotty track record for making some crazy moves during intercepts off their territory.

There has been agreements at the highest levels of government between China and the US outlining protocol for these types of encounters, but it seems as if the PLAAF has a remarkably short memory. Still, don't be fooled, this type of thing just doesn't continue to happen without consent by senior officials within the Chinese military.

What's most interesting is this incident has come at a time when the US and China are experiencing something of a honeymoon period following Trump and Jinping's meeting at Mar-a-Lago early last April. Both sides seem to have come to an agreement to work together, at least temporarily, to curb North Korea's nuclear and intercontinental ballistic missile ambitions, and China seems to be making good on their end of the agreement. In the meantime, the US Navy has non-coincidentally stopped executing freedom of navigation drills near China's man-made islands in the South China Sea.

Is this aggressive intercept the first sign of cracks in the young Trump-Jinping alliance? We'll just have to wait and see.