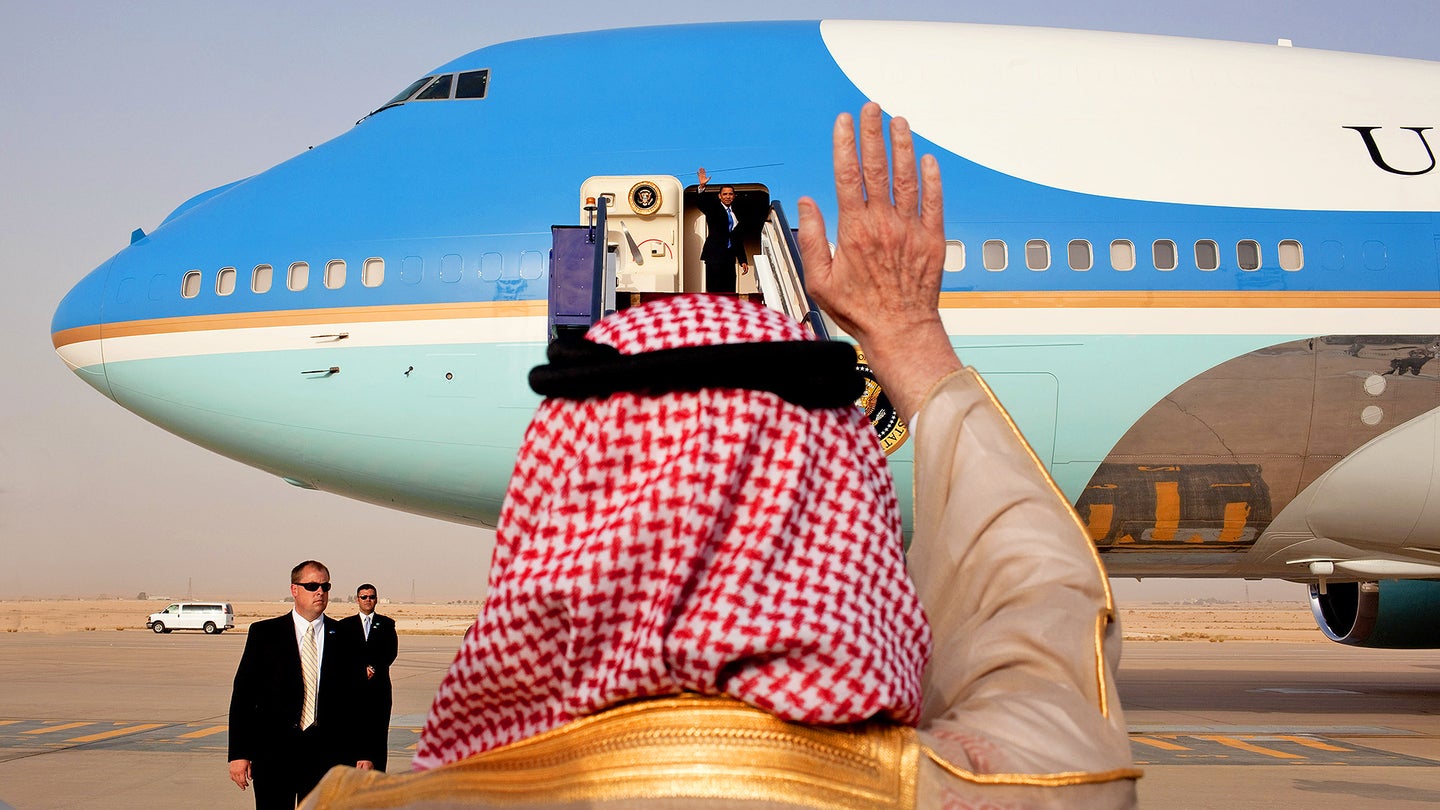 Donald Trump is set to make his first international trip as President on Friday. A White House besieged by controversy and federal investigations clearly hopes the excursion abroad can redirect the spotlight while also offering up some much needed positive headlines. One of those may very well be the first disclosed direct flight by any aircraft between Saudi Arabia and Israel.

Trump's first stop will be in Saudi Arabia, where he will be welcomed by some serious fanfare according to reports. There he aims to close a gargantuan arms deal, said to total upwards of $300 billion over the coming decade, and a whopping $100 billion in the near term. He will also likely push for a more robust Arab military alliance, something loosely akin to a middle east NATO, to deal with militant groups, terrorism and to counter Iran's growing conventional military capabilities and influence abroad.

This coalition was already established to a large to degree two years ago, primarily to fight Iranian-backed Shiite Houthi rebels in Yemen. Still, formalizing the alliance to a larger degree and better centralizing its command and control while also seeing it give priority to pro-American policy aims will likely be Trump's goal. He will also meet with other Sunni Gulf states to talk energy and trade. But these subjects could be eclipsed by a much larger diplomatic effort which we will get to in a moment.

Afterwards, the President is scheduled to fly to Israel. That's right, at this time there is no stop planned in between. If this is the case, it is a huge deal. There is no such thing as a direct flights between the two countries. Although a handful of clandestine missions may have occurred, especially considering the improving relations between Israel and the Arab world due to their common enemy, Iran, none have been documented. We're not just talking about official state flights, this includes all commercial traffic as well. Official diplomatic ties between the Kingdom and the Jewish state don't exist, and flight plans between the two countries are non-existent as well.

Usually, to make such an itinerary happen, the aircraft has to land in Jordan, sit on the ground for a few minutes and then execute a new flight plan, or at least act like it was going to stop there, before continuing on to Israel and visa-versa. It is a bizarre and sad setup to say the least. But in the past, Presidents have flown directly from other Arab countries to Israel. Amir Tibbon of Herratz writes:

There is precedent of an American president flying into Israel directly from an Arab country that doesn't have official relations with it. Bill Clinton did it in 1994, when he arrived in Israel after a short visit in the Syrian capital Damascus. President Richard Nixon did the same thing during his 1974 trip to the Middle East, which was the first time a sitting American president visited Israel.

Israir CEO Uri Sirkis told Haaretz that "Trump is drafting a vision which will become reality and bring India and Thailand four hours closer to Israel." Sirkis was referring to a normalization package offered by the Gulf States if Israel makes gestures towards the Palestinians. These steps include the opening of Saudi Arabia's airspace to Israeli flights which would substantially shorten the flight time to the Far East. Sirkis added that such a short flightpath would require the consent of other Arab countries as well, but there is hope."

The normalization package Mr Sirkis references is supposedly an unprecedented offering from the Arab world that could revolutionize the middle east. Under the rumored deal, Arab gulf states would formally recognize and open up some form of direct diplomatic and trade relations with the Israel, and open up their airspace to Israeli air traffic, if the Israel government were to agree to a number of prerequisites. These are rumored to include ending its building of settlements in the West Bank, lifting some trade restrictions on Gaza and reengaging in a new set of peace talks with the Palestinians.

As it seems to sit now, Trump would likely be the broker that would deliver this plan to Israel. So if all goes as planned, Trump will be teed up for what amounts to a major potential win, and will leave Riyadh on his way to Tel Aviv aboard Air Force One with the landmark proposal in hand. In Israel he will meet both with Benjamin Netanyahu as well as Mahmoud Abbas, with the Arab proposal likely being the hottest topic of discussion.

Under these circumstances, the flight, if it occurs as described and if the rumored plan materializes in Saudi Arabia as expected, will not only be historic on a basic level, but it will also be a sign of a changing middle east, with many people's hopes for a more peaceful region literally riding on the wings of Air Force One.