The service's decision to remove weight restrictions for pilots flying the jets had less to do with safety improvements than you might think. 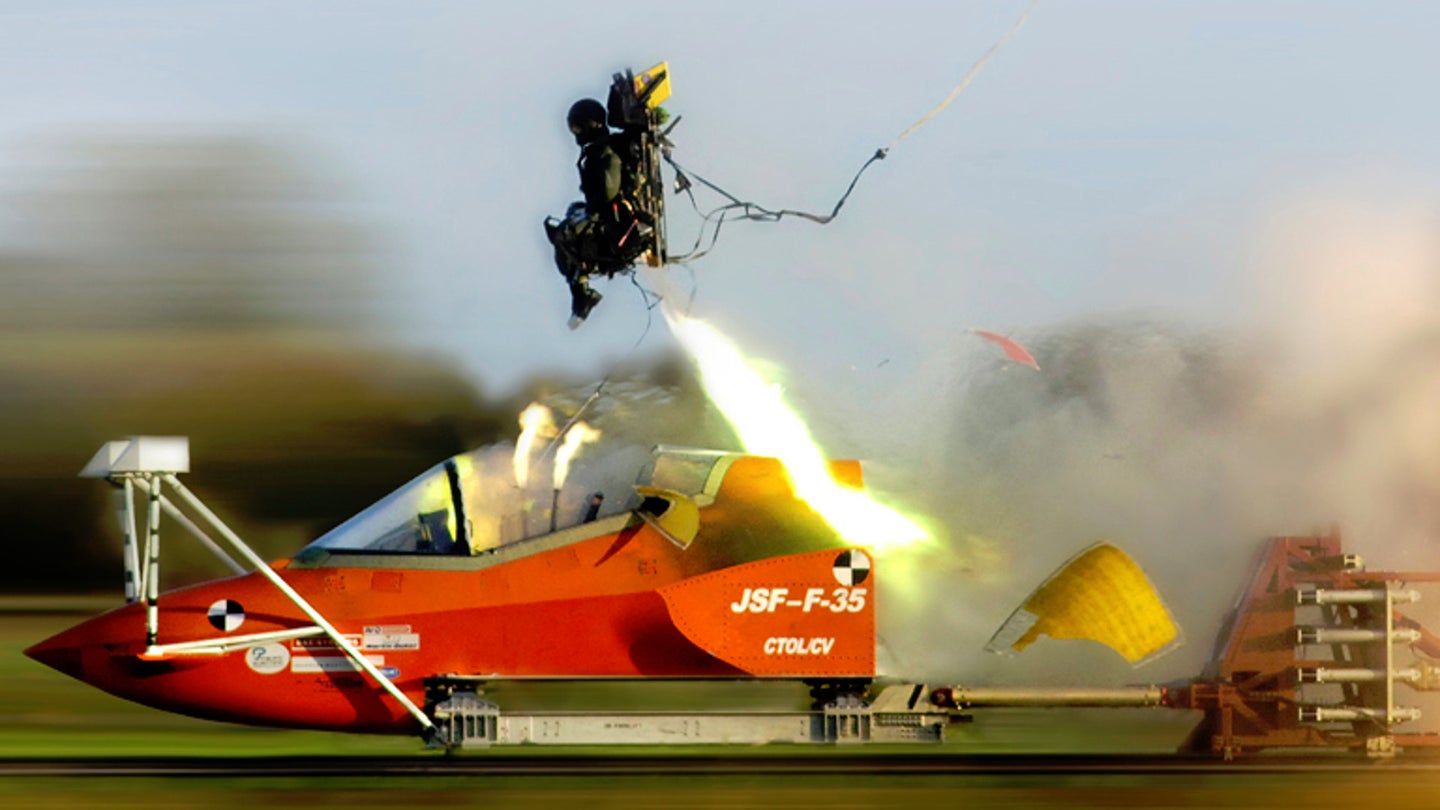 The U.S. Air Force has rescinded restrictions on how small pilots flying the F-35A Joint Strike Fighter can be, ostensibly owing to fixes to the aircraft’s ejection seat and the development of a modified helmet. But the service decided not to highlight that it hasn’t actually implemented any of those improvements yet and that they may not impact any existing pilots.

Let’s rewind a bit. On May 15, 2017, the Air Force proudly announced it had changed the rules to allow pilots under 136 pounds to fly the F-35A. Two years earlier, the service had put that limit in place in light of concerns that the Joint Strike Fighter’s ejection seat was too likely to seriously injure or even kill smaller aviators as it rocketed them out of the cockpit in an emergency. Testing had shown the size and weight of the helmet could be another dangerous factor.

At the same time, the Air Force highlighted improvements to the ejection seat and helmet that supposedly made the change possible. Martin-Baker, which makes the US16E ejection seat found in all F-35 variants, issued a similarly self-congratulatory press release.

“I have personally briefed every single F-35 pilot in the United States Air Force about these changes to their ejection seat, and I’m confident our pilots are no longer concerned with the safety of the F-35 ejection system,” Air Force Brigadier General Scott Pleus, the service’s F-35 Integration Office director, said, clearly linking the two events directly together. “I've flown in this seat myself and believe, with these modifications, this is the safest ejection seat I've ever flown.”

But tucked away at the very end of the Air Force’s official story was an important qualifier. “The new ejection seats are already being retrofitted into the existing fleet, and the lightweight helmets are available in pre-production now, while full production starts later this year,” the service’s reporters noted.

The War Zone reached out to the Air Force’s Air Combat Command (ACC), which oversees the vast majority of the service’s combat aircraft, including all the combat-coded F-35As, for clarification of this point. As it turns out, while the weight restriction was gone, it wasn’t because the Joint Strike Fighters had received the new safety improvements. According to the ACC public affairs office, at the time of writing, the Air Force has exactly one F-35A, situated at Luke Air Force Base in Arizona, with the new seat. Rockwell Collins and Elbit Systems of America (RCEVS) have not put the improved helmet into full production.

This is not a trivial point. For years, the Pentagon’s F-35 Joint Program Office (JPO) had serious reservations about the US16E ejection seat and whether it posed a hazard to pilots in certain weight ranges. Additional testing showed those concerns weren’t misplaced and led to the weight restrictions to begin with.

In 2010, a test involving a 103-pound manikin showed damage consistent with a serious neck injury. In July 2015, the Pentagon repeated the experiment, but with an improved helmet, and got the same results. A 136-pound dummy experienced the same stresses during an evaluation the next month.

“After the latter failure, the program and Services decided to restrict pilots weighing less than 136 pounds from flying any F-35 variant, regardless of helmet type,” the Director of Operational Test and Evaluation noted in his 2015 review of the F-35 program. “Pilots weighing between 136 and 165 pounds are considered at less risk than lighter weight pilots, but at an increased risk (compared to heavier pilots).”

“The level of risk was a labeled ‘serious’ risk by the [Joint] Program Office based on the probability of death being 23 percent and the probability of neck extension (which will result in some level of injury) being 100 percent,” the report continued. “Currently, the program and the Services have decided to accept the risk to pilots in this weight range, although the basis for the decision to accept these risks is unknown.”

As a result of these findings, the JPO demanded that Martin-Baker identify and develop a solution to the problem. The Air Force also considered qualifying an alternative seat, United Technologies’ ACES 5, in case the United Kingdom-headquartered defense contractor couldn’t fix the US16E. The company ultimately developed a mechanism that would delay parachute deployment, and therefore the force exerted on the pilot from the canopy opening, when necessary. Aviators in the lower weight ranges would flip a switch on the seat to activate this new “light” mode. Separately, RCEVS trimmed yet more weight form the helmet to reduce additional strain on an individual’s neck during an ejection.

But more than a year later, and after its controversial decision to declare the F-35A combat-ready, the Air Force’s own calculus had apparently changed largely independent of whether it had actually implemented these fixes or not. Despite Pleus’ remarks, the service had become willing to accept what it described as a statistically unlikely risk.

“Flying fighters, or any aircraft, is inherently risky and there isn’t a single ejection system without risk,” an ACC public affairs officer told The War Zone in an Email. “The team that completes risk analysis does so for the entire fleet, and makes recommendations to the Air Force and air worthiness authorities on whether a given system has acceptable risk or not. We carry similar risks on many other airplanes in our inventory, not only for their ejection seats but also other variables.”

The Air Force subsequently ran a new risk analysis and “in accordance with the standard discipline and engineering done for all aircraft” accepted the relative danger to smaller pilots flying the F-35A, and only in part because of still forth-coming safety improvements. The service declared the overall danger to pilots of any weight flying in routine conditions at normal speeds to be low. Aviators weighing less than 136 pounds still had a medium-level risk in low-speed conditions where the aircraft was rolling or yawing.

“The probability of an ejection in this slow speed regime remains very low, estimated at one in 100,000 flight hours, and the Air Force has accepted risk of similar magnitude in previous ejection seats,” the ACC public affairs officer added. “Based on the remote probability of an event occurring requiring ejection from the aircraft and pilot weight considerations, the airworthiness authorities recommended and the Air Force has accepted lifting the restriction for lightweight pilots.”

This is a fair point and an argument that many proponents of the F-35 made after the discovery of the ejection seat issues in the first place. The Air Force has repeatedly stressed that only a minority of its fighter pilots fall into this lighter weight bracket. It’s also an easy decision to make since the restrictions meant no pilots under the weight cap ended up in the training pipeline. It’s not clear if there are any F-35 pilots who got sidelined by the rules changes back in 2015.

As of May 2017, the service didn’t expect to begin training any new lightweight pilots until the fixes are available, according to Air Force Times. Still, removing the restrictions before the updates actually reach the F-35s would help get candidates into the training cycle sooner. The service’s hope is to have an aviator under 136 pounds in the training pipeline by the end of 2017 and in the air by 2018.

Regardless, it is the service’s prerogative to assess and determine what risks it’s willing to take in general. However, the way in which the Air Force announced the changes and obscured the actual relationship between the two events only begs the question of how strongly the service believes in its own argument. It’s worth noting that neither the U.S. Marine Corps nor the U.S. Navy, which have different risk assessment rubrics from the Air Force, have made a similar decision. Their bans on pilots weighing 136 pounds or less from flying the F-35B and C respectively, both of which use the same US16E ejection seat, remains in place. Some foreign operators, with overall force demographics that skew smaller and lighter, may not be able to make do at all without the upgraded seats. Japan received its first F-35 in December 2016, but there has been no word on whether there are any restrictions on who can fly the jet.

Of course, the situation will steadily improve. The Air Force has developed a plan to install the improved seats across the fleet for the few pilots who might need them. The service hopes to retrofit at least 14 aircraft each month, with contractor teams needing between 4 and 5 days to install a single seat. Any F-35As that go for maintenance at depot-level will automatically receive the seat regardless of other scheduling. Though there isn’t a fixed time frame for the modifications, the overall plan is for the jets at Luke Air Force Base to get the upgrades first, then those at Eglin in Florida, and finally the planes at Hill in Utah. The Navy, Marine Corps, and foreign operators have not yet announced whether they will upgrade to the new seat.

In the meantime, the rules change is unlikely to have any immediate impact on the Air Force’s Joint Strike Fighter pilots, who will continue flying with the existing seats and helmets, or their operations.