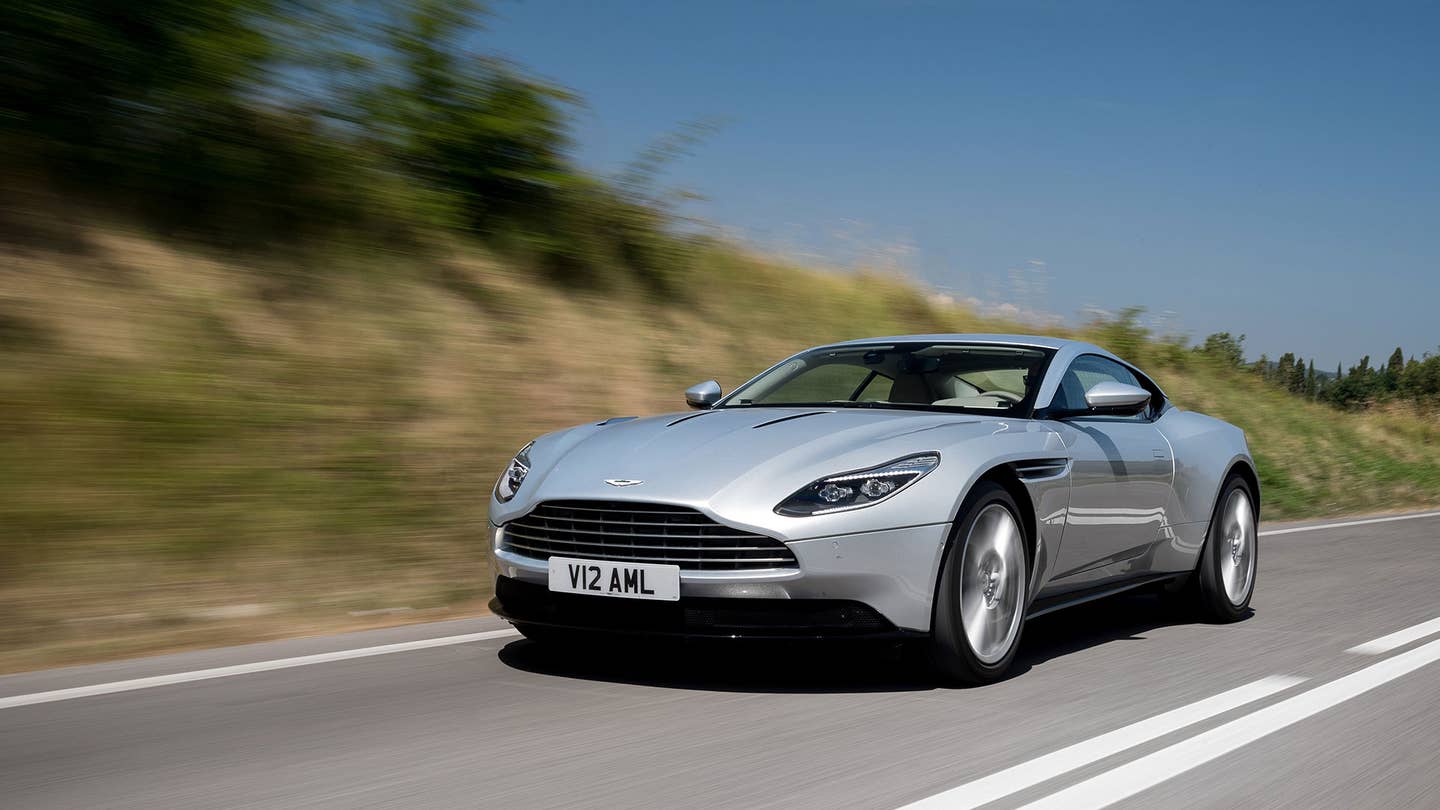 Aston Martin has over a century of stunning heritage. It has a state-of-the-art factory and a top-secret skunkworks. It has deep-pocketed investors that maintain a mostly hands-off approach and a straight-talking CEO with a logical plan for the boutique brand’s future—a strategy he refers to as, “Shit or Bust.” It has an ongoing relationship with a world-famous and well tailored, if fictitious, British super-spy. And it has an erudite and exclusive fan base. What Aston Martin hasn’t had is a 21st-century car designed for the modern consumer.

This two-plus-two grand tourer, the next generation of the DB cars that have formed the backbone of Aston’s post-war legacy, represents the terminus of phase one of Palmer’s three-part program—Survival and Bridging. “With this car,” Palmer told me at the car’s official launch last month, in Italy, “we’re at the end of the beginning.” The plan for the brand’s renaissance will now move on to phase two (Sports Cars). But let's not get ahead of ourselves.

After a day driving a Lightning Silver version of the new car hundreds of miles around the Sienese countryside, "the end of the beginning" seems an intriguing and apt way of describing the DB11. The last DB car available to the public was the DB9; Aston Martin skipped a number when they named this one—an intentional pronouncement of a larger-than-normal break. (There is an Aston Martin DB10, but it was built specifically to appear in the 2015 James Bond film Spectre, and was never put into production.)

To this end, unlike it’s charmingly anachronistic predecessor—the interior of which felt like a faded Mayfair hotel suite begrudgingly renovated by a corporate parent—the DB11 cossets like a $300,000 hand-built British car should. It hosts blemish-free Bridge of Weir leathers brogued like a pair of Barker Blacks, exotic wood marquetry fit and finished to rival Ince and Mayhew, and a hood ornament hand-cast in copper, chrome-plated, and enameled by a skilled Birmingham jewelry maker.

Yet underneath all this finery, the real surprises lurk. These come in the form of true technological sophistication—big news from a brand whose last great early adoption was the digital instrument panel in the (disastrous) 1970s Lagonda. The DB11 sports Bilstein’s latest active dampers for less stiffness and more stickiness. It hosts customizable suspension and powertrain settings, each with a trio of distinct modes, and features a brake-based torque vectoring system to keep the wheels rotating optimally in and out of corners. It integrates a clever "virtual spoiler" that feeds air slipping around the sculpted C-pillar into a downforce-generating diffuser atop the boot. And its electronic architecture is underpinned by recent investor Mercedes-Benz’s technical talents, and consists of a very functional COMAND-based infotainment system, a haptic (but not hectic) HVAC interface, and an analog-style digital speedometer, all with unique and elegant fonts that read in the superlative, Germany-does-Great Britain style perfected by Volkswagen’s designers at Bentley, and BMW's at Rolls-Royce. If this presages, as it might, an eventual Daimler acquisition, I’m good with that.

But the heart of the matter, quite literally, is Aston’s all-new V12. Set so far back in the long, sculpted hood that its rests entirely behind the front axle, and downsized from the outgoing 6.0 liters to a new 5.2-liter displacement, the engine is fitted with a pair of turbochargers to maximize power or efficiency (but not likely both at once). It's without question the car’s top tier sensorial delight.

Palmer described it as “a large, naturally-aspirated, twelve-cylinder engine, with turbos attached,” and he’s not being hyperbolic. The engine makes all the proper V12 thrum, rasping rhapsodic as it runs up through the revs, combining proper Aston power-everywhere bandwidth with proper Aston limbic delight as it bugles toward redline. It is interrupted only on occasion, by an odd and almost corgi-esque intake yipping, a form of forced-induction sound tuning I can only assume was put into place to please the Royals and other landed gentry. I asked Palmer if any of the noise is piped in, as in so many recent sports cars. He stiffed his upper lip. “Aston Martin will always be authentic.”

The driving experience is similarly legit. The technological wizardry never makes itself obvious, nudging in like in a McLaren or Citroën. Instead, it simply retreats and rewards the driver—especially the mature and less extroverted driver—with its ideal blend of ride and handling, and its remarkable ability to tighten up just the right amount when pushed. Italian mountain bends are dispatched at 70 mph with the same ease and delight as diminishing-perspective lengths of Italian Autostrada at 140 mph. If you require the rear to break loose, feel free to click it into Sport Plus; for me, doing so in an Aston is just the tail wagging the dog.

“We’re positioned between a Ferrari and a Lamborghini on one side, and a Bentley and Rolls Royce on the other,” Palmer says, “but without a compromise in either direction.” The car is a unique kind of imperturbable: It’s not that irks and annoyances don’t exist around it, it’s that, like Zeus, it’s far too imperious to give a fuck.

This mettle is also reflected in the DB11’s conscientious sheet metal. Well, mostly. From five paces, the overall effect is one of purpose and purity, a result of a very Aston-esque mesomorphism combined with a strict adherence to the principles of the Golden Sector, an eye-pleasing breakdown of 2/3 to 1/3 ratios that dictates the proportions of elements like hood to cabin, body to window, and trunk to valence. But to my eye, this is a car whose third-look details don’t offer quite the same reward. Viewed nose-to-tail (or -hip, or -thigh), the Golden Sector proliferates, appearing in every fender crease, hood vent, headlamp surround, and side strake. But that ubiquity somehow undermines the cars overall ability to visually please. What’s that old saw about the traveler who keeps dividing and subdividing his journey? He never gets there.

Within this design conundrum lays Aston Martin’s core challenge. “Aston Martin is a little like cricket in the States,” Palmer says. “We have very high awareness, but not comprehension.”

The DB11 is immediately recognizable as an Aston, but when studied from the outside, it appears to be trying just a bit too hard to alert you to that fact. As the brand expands to something resembling a full line manufacturer—with new sports tourers, a crossover, a mid-engine hypercar, and a reborn Lagonda luxury sedan—Palmer plans distinct design identities for each. Identities that, as he says, his octogenerian mother will be able to distinguish at a glance. We can hope that this design is not the first step, but an overstep—a literal and figurative definition from which the brand can retreat.

"For the Love of Beautiful Cars" is the Aston Martin motto. If the brand is looking for transparent comprehensibility moving forward, that combination of passion and allure seems like it should be charged enough to draw one perfect line around itself. The DB11 has that line on the road, and in its profile. It just needs to rub out some of the other lines that obscure it. We recommend some time on an English wheel.

Coming soon: Mike Spinelli behind the wheel of the DB11—with video!