Look out Tesla: These guys are hungry for your lunch. 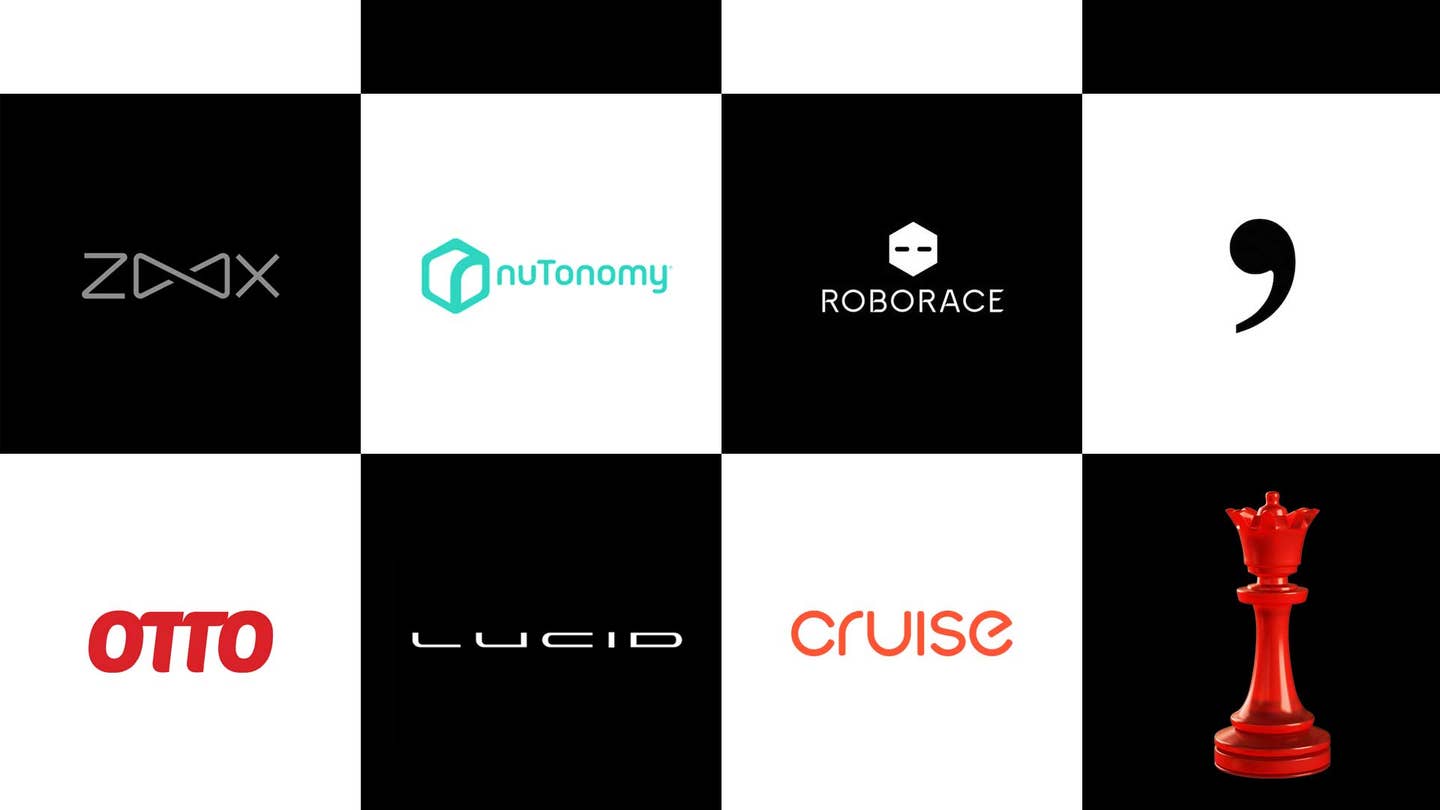 Tesla's Autopilot feature generates the most publicity in the world of autonomous vehicles, but there are other companies just as close—if not closer—to making a true self-driving car a reality. Start-ups and automotive manufacturers are going head-to-head in the race to driverless technology, but the reality is that the transition from human drivers to computer drivers is a complex process, and an equally complex market that won't be cornered by any one company.

Google has been working on self-driving cars since 2009, developing prototype self-driving “pods” that operate in Mountain View, California. Based on its research, the technology giant believes that pursing Level 5 autonomy—a self-driving vehicle that operates without a driver, or even a steering wheel—is the optimal path towards autonomous driving. The data collected from the millions of miles in L3 test vehicles showed that humans are easily distracted when not fully engaged in the driving process, and may not be able to resume control of the vehicle if intervention is required. Although the U.S. Department of Motor Vehicles issued a letter signaling that it's prepared to give Google’s autonomous system a license to driveon its own, the state of California is not; the state’s motor vehicle laws require self-driving vehicles to retain a steering wheel, brake pedal, and licensed driver. Google is currently testing autonomous L4 pods with removable steering wheels and brake pedals on its campus in Mountain View. With more than 2 million miles of real-world experiences, its self-driving technology is arguably the most developed platform and product. However, there’s no clear business model at the moment. That said, Google also is working with Fiat-Chrysler on outfitting a fleet of Pacificas with its autonomous L4 operating system for use as a shuttle or ridesharing service.

Sverdlov is building an all-electric racing series that will use algorithms instead of drivers in the battle for first place. Details of the series are scarce, and no sponsors or teams have been announced. However, one thing we do know is that all Roborace vehicles will be identical, and the prototype race vehicle is the work of car designer Daniel Simon, who counts Bugatti, Audi, and SpaceX as clients. (If you've seen Tron, you've seen his work.) Semiconductor giant Nvidia has been tapped to provide supercomputing power with its NVIDIA DRIVE PX 2, but it's not clear if they will be just a sponsor or also a team in the series that is expected to coincide with Formula E as a warm-up race. When that will be is anyone’s guess, as early results have been mixed: initial tests in Hong Kong did not go well, though "DevBot #1" recently completed a successful 30-minute test at the Marrakech ePrix. The algorithms still need a lot of improvement before several autonomous race cars competing simultaneously on the track is safe enough for spectators.

NuTonomy develops software and algorithms for self-driving vehicles. In partnership with on-demand ride hailing company, Grab, it launched an L5 fully autonomous taxi pilot program in Singapore in August 2016 using a fleet of electric Mitsubishi iMievs. However, a collision with a truck while changing lanes in October caused the nascent company to halt trials until investigations of the accident are complete.

Autonomous taxi company based in Silicon Valley whose curious name apparently means “the zoo of the new.” Their self-driving model offers a different take on other L5 autonomous cars, and does away with the windshield, steering wheel, and forward facing rows in favor of four opposite facing seats to provide a “private car” feeling in what is essentially a shared vehicle. That said, Kentley-Klay’s personal website biosays a L4 vehicle is coming soon, which is in line with current California state regulations requiring autonomous vehicles to retain a steering wheel with a licensed driver behind it. The company received a permit earlier in 2016 to test autonomous vehicles in California, but little else is known about the start-up, which operates publicly in “stealth mode.” Its site contains only a logo that clicks through to an email address, and source code reveals it uses the meta keywords “Tim Kentley-Klay, zoox, autonomous vehicle, level 4, mobility, wild.” According to Crunchbase, more than $300 million has been invested in Zoox so far.

While most of the self-driving vehicle space is focused on driving around humans, Otto is targeting the trucking industry. The autonomous truck technology company was started in 2016 by a handful of other Google robotics, mapping, and Android engineers. The company quickly caught the attention of Uber, and was acquired in August 2016 for a reported $680 million. Otto has partnered with Volvo Trucks to build the first autonomous truck, and delivered a commercial shipment of beer in Colorado.

What started in 2013 as an aftermarket self-driving driving kit for the masses has become an autonomous driving platform for the masses. The San Francisco-based start-up was acquired by General Motors in March 2016 for $1 billion, and it’s currently working with the automotive manufacturer and ride-hailing company Lyft (in which GM owns a significant stake) to create a fleet of autonomous taxis. The strategy goes head-to-head with Uber and ensures that GM products will be used even as ride sharing and car sharing become bigger players in the transportation arena.

It’s often positioned as a Tesla competitor, but it’s reportedly underfunded, has stalled on its manufacturing plant in Nevada, and has yet to reveal a prototype vehicle. However, the company—which is backed by Chinese electronics manufacturer LeEco—hired away several autonomous driving experts from rival companies Tesla and Apple, and received approval in June 2016 to test self-driving vehicles in California. Its self-driving vehicles have been spotted under heavy camouflage, but the company will likely debut a conventionally-driven electric car at the 2017 Consumer Electronics Show, which likely will look nothing like the FFZero1 race car concept.

The Chinese electronics manufacturing company that recently purchased Vizio for $2 billion in July 2016 and is a large financial backer of Faraday Future. And yet, it’s also independently building a self-driving electric car, the LeSEE (Super Electric Ecosystem) that debuted at the Beijing Auto Show earlier this year. An updated model was scheduled to make its U.S. debut in October, but was unable to attend its own reveal due to an accident involving the vehicle transporter. The LeSee Pro was fetched off the set of the Transformers movie being filmed in the UK for the event. However, the company’s future as an auto maker is unclear—in a letter to shareholders, its CEO Jia Yueting admitted recent acquisitions and overly-ambitious growth strategies have spread its finances a little too thin. The technology behemoth’s other businesses include cloud computing, streaming content, mobile phones, online retailing, and electronics manufacturing. Until it shores up its finances, plans for the capital-intensive electric car business are on hold.

The luxury electric car start-up founded in 2007 recently emerged from stealth mode and announced its plans for a 300-mile, 1000-hp electric car. Lucid Motors, which recently changed name from Atievia, started as a battery technology company, and has been showing off its electric car platform in a test mule van that’s capable of Tesla-like speed. More recently the Palo Alto-based company released a photo of its camouflaged prototype car parked between Benz S-Class and a BMW 7-Series to demonstrate that the yet-to-be-named car has the interior capacity of a full-size luxury sedan in the body of a mid-size vehicle without compromising power or range. It counts LeEco as one of its investors, and will be sole supplier of batteries for Formula E, and its electric car is rumored to enter production in 2018 with semi-autonomous features, with full self-driving capability released down the line.

George Hotz: self-described hacker who was the first person to jailbreak an iPhone, and quit artificial intelligence software company Vicarious to found Comma

The idea was to build an aftermarket autonomous car kit using off-the-shelf cameras, sensors, and software that anyone could install on their car, but the National Highway Traffic Safety Administration sent the nascent start-up a cease and desist letter, effectively killing the product before it was released. However, in a recent Twitter post, the company negated rumors that the company was “dead;” that it had “cancelled a product.” What its next product will be is not known, but co-founder and CEO George Hotz—made famous for a disputed $1 million bet with Tesla CEO Elon Musk—announced that he was tweeting from China to pursue other products and markets, hinting that the plug-in driverless technology may be applied in a country with fewer regulatory requirements.

(Note: This post has been updated to clarify some statements about Roborace.)