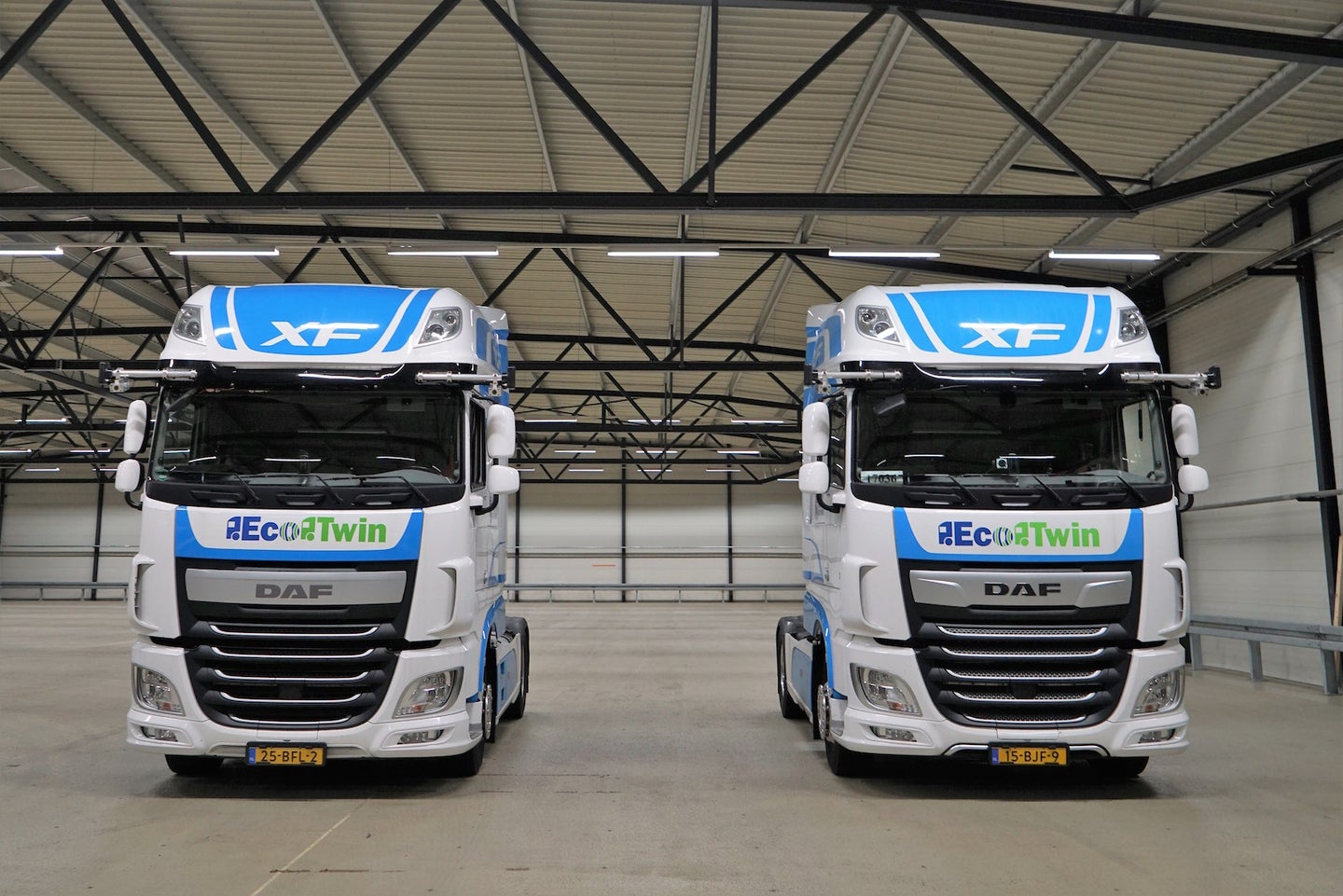 Tesla CEO Elon Musk plans to reveal an all-electric semi-trailer in mid-November. The 18-wheeler would, Musk said last year, be able to deliver between 300 and 600 miles of daily truckin’ to America’s long-haul industry. That claim raised eyebrows—given the cost and weight of battery technology—and now the group of Carnegie Mellon researchers who initially shot holes into Musk’s admittedly light-on-details early musings have produced another study arguing the concept’s best hope for economic feasibility might be large packs of trucks rolling bumper-to-bumper down the highway.

The idea, called platooning, isn’t remotely far-fetched. The U.S. Army and Auburn University demonstrated the concept over the summer with a computer-controlled platoon of conventional diesel vehicles driving down I-69 in Michigan, citing the benefits to fuel efficiency, congestion, and overall safety. Meanwhile, in Europe, Dutch consortium EcoTwin is developing the communication technology to commercialize the strategy for commercial transport.

According to the CMU investigators, such robo-convoy thinking just might make Tesla’s proposed rig—which they estimate would be able to carry 22 tons no more than 300 miles in one day, at best, and it would still be prohibitively expensive—a reasonable proposition. Their study, published in the American Chemical Society’s journal ACS Energy Letters, found that seven vehicles platooning together—that is, driving just 8-feet apart, either manually or under autonomous control—on trips shorter than 300 miles would reduce aerodynamic drag by 50 percent. This, in turn, would permit a 15 percent reduction in the size of the lithium-ion battery packs required for similar distances driving solo, and therefor a reduction in vehicle costs in order to get the same kind of daily range out of the trucks. It could be done with an 880 kWh battery instead of a 1,100 kWh battery in a solo rig, with a payload boost from 16 to to 25.5 tons, as well. The battery for this would cost $158,000 instead of $200,000.

The key part of the equation is that reduction in drag. “A single semi truck, due to its large cross-sectional area, will have a lot of air to ‘push’ through in order to move forward,” notes Venkat Viswanathan, an assistant professor of mechanical engineering at Carnegie Mellon, who studied the problem with graduate students Shashank Sripad and Matthew Guttenberg. “When the air travels around the back of the trailer it becomes turbulent, which has a negative impact on the drag force impacting the truck. When trucks platoon, the lead truck ‘paves the way’ for the trucks behind it while the trailing trucks break up the turbulent air stream for the truck in front of it.”

These two effects generate a net benefit of the air traveling more smoothly around the truck platoon, lowering the overall drag coefficient, Viswanathan adds. Hence the reduced amount of energy required to travel a given distance. He says the platooning also adds to battery life by reducing strain on the system—so much that it could add 120,000 miles of use to each battery pack, or a year’s worth of driving.

Of course, the concept still has other challenges, including the viability of deploying platooning with enough frequency and consistency to generate the potential benefits, the need for digital communication and autonomous driving capability in the trucks, and the likely need for truckers or their employers to be willing to buddy up with the packs. Even with platooning, the CMU team still contends that electric semis have an uphill battle in an industry that wrings as much efficiency as possible out of its hardware. “We still maintain our position that current Li-ion batteries will fall short of rendering electric semi trucks competitive with diesel counterparts when operated in a conventional setup,” Viswanathan says. “The scale of these systems and the required energy is such that the cost per kilowatt-hour and specific energy of Li-ion batteries make it very difficult to enable long-range and high payload capacity,"

So the best-case scenario is that platooning will help grease the skids with the trucking industry, but it will take major improvements in battery technology for electric semis to actually replace diesels. But if one this is certain, Musk and his team will keep on truckin’ until they get it right.