Europeans know the final kilometer of a commute is where the magic happens. Will Americans ever wise up? 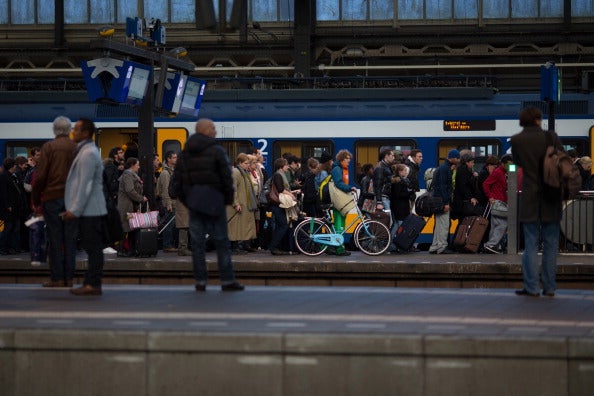 These are all the ways you can bookend a commute, now and in the near future. (Well, near-ish.) All of them—and we’ll surely see even more now that the mobility-obsessed car show season is up and running—can contribute to making your commute more efficient, and in some cases a whole lot more fun. But for the most part, we don’t take alternative options particularly seriously here in the good ol’ USA. Indeed, while most of us say we love variety in our lives—in music, in friends, in vacations, in exercise, in work—there aren’t many who dig a lot of variety in our commutes. We may drive to the train station, ride the rails into town, and hoof it to the office, but that’s usually out of economic necessity. In reality, every transition is a pain point; every mode fraught with its own potential for hassle.

We want things to be fast, easy, and affordable. But in urban areas, that ain’t gonna happen—at least, not until we’re ready to leave the warm, weather-sealed comfort of our cars and truly double-down on mixing up our mobility. A slew of recent research into the issue has found that the time to do so is now, that the holy trinity of fast-easy-affordable is contingent on a crucial balance between new technology, increased commuter flexibility, and, most of all, innovative thinking—particularly in the knotty world of last-mile mobility. So are American commuters ready to contribute to the solution?

It would certainly be to their benefit if they do. Not only do more evolved options like electric vehicles and carpooling limit pollution and congestion, but a new study from the University of Southern California, for instance, found that the way people even get to and from transit stations is critical in speeding commutes and opening access to job opportunities, particularly in regions that have only marginal transit systems. The researchers found that driving or biking to a transit station more than doubled the number of jobs that could be reached, by transit, in a 30-minute commute. Furthermore, having a variety of last-mile options at either the beginning or end of a commute was more effective than, say, boosting city bus frequency. This would include ride-hailing services like Uber and Lyft and bike-sharing startups, all of which can specifically target last-mile mobility.

As communities grow, the urgency becomes even greater. Columbus, Ohio, is expecting it population to surge by 1 million over the next 30 years, and it’s working now to encourage residents to rethink their rides. A public-private transportation group called Smart Columbus took steps last month to reduce the number of single-person vehicles on the roads and increase the number electric-vehicles. Forty of the largest employers in the region are installing EV chargers and offering incentives for alternative transport use, the downtown business district is developing pedestrian-friendly routes, bike lanes, and bike sharing to ease the last-mile challenge for commuters.

But to truly put a dent in commuter misery, the innovation will have to go beyond Uber and Lyft and a bunch of racks of heavy bicycles. European communities—already accustomed to multi-modal transit, and uniquely bullish on bikes and walking—are wrestling with the challenge even more aggressively than those in the U.S. One recent analysis by research firm Frost & Sullivan found that economic growth and demand for new options has spurned car manufacturers to get in on the game, exploring shared ownership, smart parking, corporate car-sharing rather than individual ownership, and partnerships with alternative transport providers.

One Dutch effort, Next Urban Mobility, is exploring ways of consolidating the transportation options in terms of both account management—managing everything through a single app—and actual physical proximity. For instance, creating “mobility hubs” where you can drive your car to a parking garage and access rail and bus options, car-sharing services, or even bike-sharing services where bicycles will be waiting right at your assigned spot. In that case you’d simply cycle into the office, taking pressure off the downtown traffic and allowing in many cases for faster and more fluid access to your office. You don’t have to ride 10 miles to work—just a quick hop from a garage just outside of town. Sounds kinda nice, actually.

Of course, what works in Europe won’t necessarily always work in the U.S., where residential areas are designed differently—usually requiring car ownership for even the quickest of errands—and cultural and geographical differences influence both personal and city-wide commuting strategies. So service-based models rather than ownership-based models might have a harder time gaining traction in all but the largest cities.

Even casually tapping such seeming silver bullets as app-based services like Uber and Lyft can backfire. A study published this month by the Institute for Transportation Studies at UC Davis found that commuter use of such services led to increased car traffic and reduced transit use in big cities in the U.S. The study surveyed commuters in both urban and suburban areas of Boston, San Francisco, Chicago, New York, Seattle, DC, and Los Angeles, and it found that while there are benefits to the use, including reduced drunk driving and reduced car ownership, the services also encourage use for trips that would have been avoided or achieved by walking or public transit—therefore increasing congestion.

Even worse, there’s an economic divide growing because of them—those who can afford to hail and Uber or Lyft, whether for last-mile commuting or just running around town, do so more frequently because it’s more convenient and faster than public transit. Those who can’t afford it stay on public transit that’s being also slowed down by the increased Uber and Lyft-caused congestion.

But while the potential negative impacts of such solutions will need attention, overall the promise of seriously streamlining our commuting could be at our fingertips—whether through the public-private partnerships creating things like mobility hubs, app-based sharing services, or the eventual use of autonomous vehicles that can reduce traffic jams and inner-city congestion. Of course, a lot of it will rest, as well, on individual initiative—those who see the benefit themselves of not driving all the way to the office and instead carry electric skateboards or scooters onto the subway, invest in their own e-bikes, or gin up their own combinations of all of the above.

But is America ready this? At this point, it’s anybody’s guess. After all, those cars are awfully convenient—and warm....

Eric Adams is The Drive's Technology Correspondent. Follow him at @ericadams321