Why Is Google ‘Gravely Disappointed’ by California’s Driverless Car Proposals? 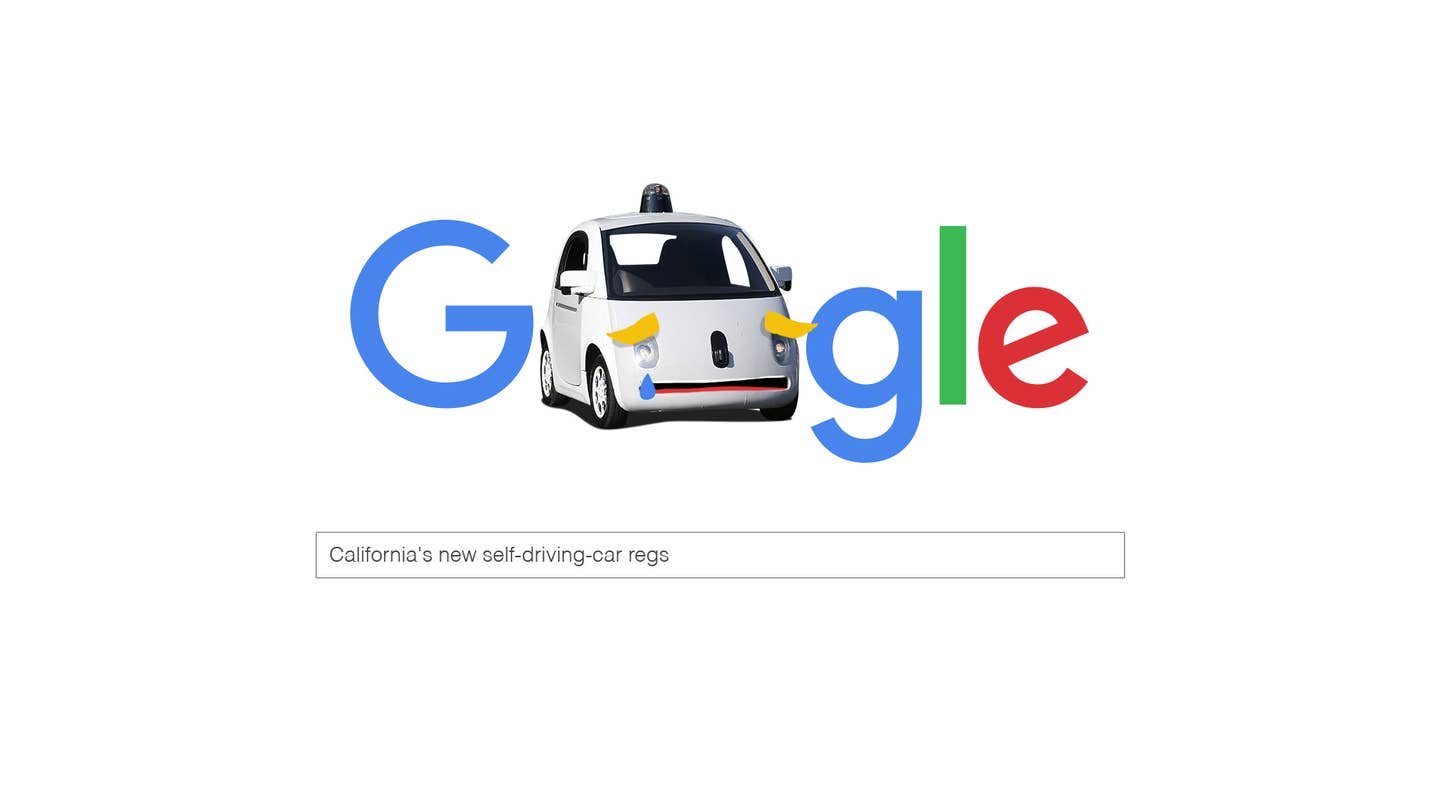 Nerd alert. The California DMV issued a draft of its first self-driving car regulations in late on Dec. 16. Even though the draft is subject to change, Google has already expressed its grave disappointment.

According to the draft, self-driving cars in the state of California must still be operated by a license driver present at all times in order to take control of the vehicle in the event of a technical failure or other emergency. Furthermore, California also mandated that the driver be at fault in the event of an accident. Both requirements fly directly in the face of Google's position.

"In developing vehicles that can take anyone from A to B at the push of a button, we’re hoping to transform mobility for millions of people, whether by reducing the 94 percent of accidents caused by human error or bringing everyday destinations within reach of those who might otherwise be excluded by their inability to drive a car," Google explained in a statement after the draft was released. "Safety is our highest priority and primary motivator as we do this. We’re gravely disappointed that California is already writing a ceiling on the potential for fully self-driving cars to help all of us who live here."

Additional rules in the California DMV’s regulation proposal include the requirement for all autonomous vehicle consumers to get a special state-issued driver's certificate for driverless cars. The cars must also pass testing administered by a third party before it can be sold.

Since Google began its self-driving car project, the tech giant has logged more than a million autonomous miles on the streets of Mountain View, Calif., and Austin, Texas. In May 2014, Google presented its very own self-driving car concept that completely eliminated the steering wheel and pedals. However, the company was compelled to include driver controls in order to make its vehicles road-legal.

Google may be eager to deliver its car of tomorrow, but there skeptics who share Soublet's position.

“Google may be in overdrive in its rush to develop robot cars, but the DMV has admirably served as traffic cop and proposed reasonable limits to protect public safety,” wrote John Simpson for Consumer Watchdog.

“Any of this stuff can be changed down the line,” reiterated California DMV spokesperson Jaime Garza. “The regulations are in draft form and they will evolve as we get input.”