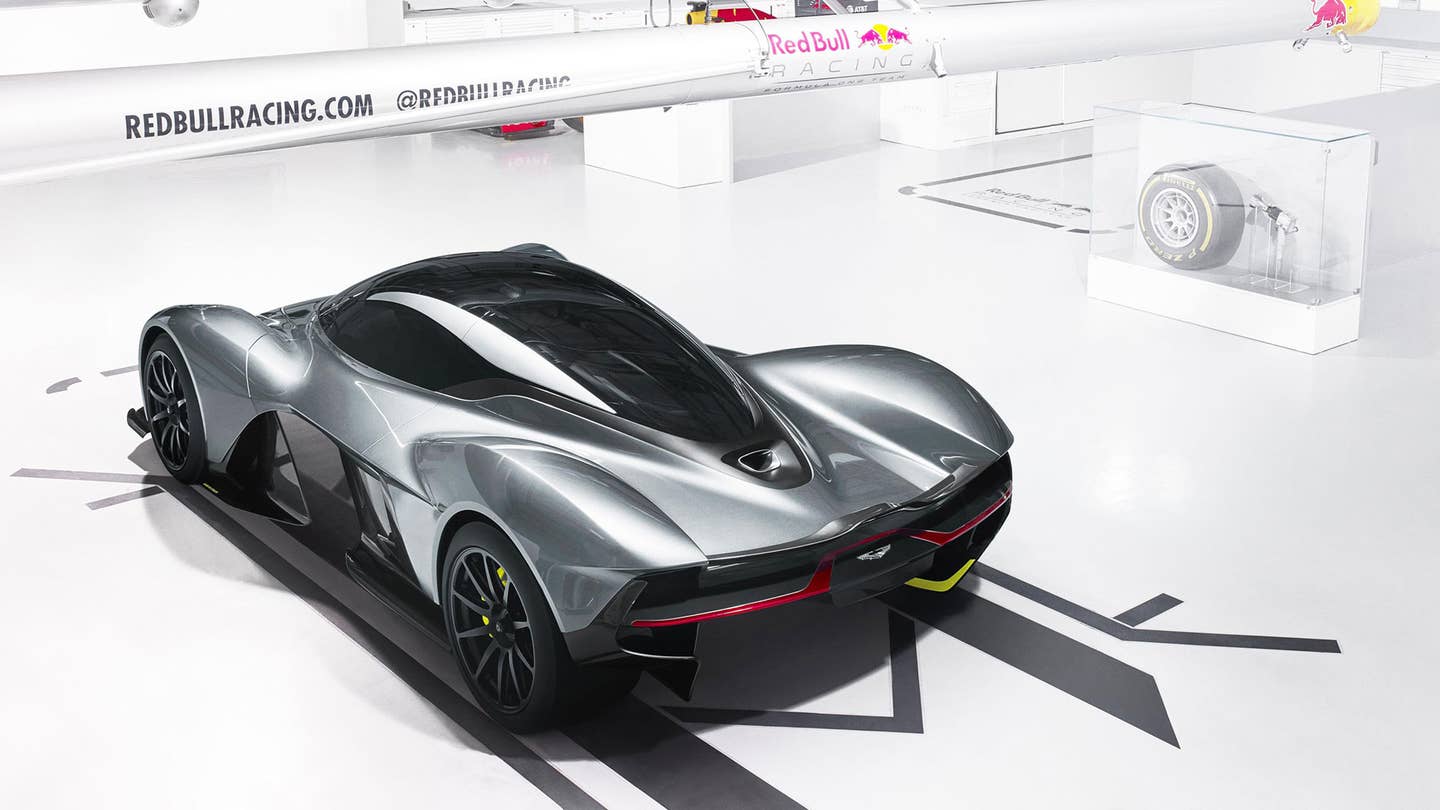 Last week, Aston Martin upstaged even the unveiling of the LaFerrari Convertible by revealing the latest, utra-desirable, limited edition vehicle from its Q Advanced Operations SkunkWorks: an impossibly low, mid-engined, road-legal, F1-handling hypercar that resembles a scarab dissected by Dr. Moreau and refashioned by Cyberdyne Systems. It's the first collaboration between Red Bull Racing’s celebrated Chief Technical Officer, Adrian Newey, and Aston Martin’s celebrated Chief Creative Officer, Marek Reichman. Called the AM-RB 001, it will be produced in quantities that barely crest the three-digit threshold, and will be sold for prices that are certain to crest the seven-digit one.

Since I was in Italy with Marek this week to test drive the all-new Aston Martin DB11 (more on that soon), and since we both like to drink and blab, I am able to bring you all manner of intriguing insider information, not only about this new car, but about what it represents for the brand and its future.

• It will have an all-new, high-revving naturally-aspirated V12 engine: Aston has made much of the new twin-turbocharged V12 that they built from the ground up for the DB11. Because of its goal of producing one horsepower for every kilogram of weight, the sizable 5.2-liter mill does not suit this project. “This will be an all-new V12, much smaller than the DB11 motor,” Reichman told me. “It takes all of the knowledge of Formula One that Adrian has gained, not only at his current employer, but at Williams and McLaren as well.” Reichmn said it will rev to an astounding 11,000 rpm. “We may be saying farewell to this kind of powertrain, so we plan to produce the best of the species.”

• It will not fly: Reichman stressed the importance of the aerodynamic and ground effects engineering that will be required to keep this car, well, terrestrial. “We don’t want it to fly.” Fortunately, he said that Newey is a “literal genius” when it comes to creating these systems. “His vision in this area is not a light, it is a laser.” Fortunately for Reichman, who has a keen eye for ideal proportions, the bulk of these systems will exist underneath the car—“all the stuff which hopefully you won’t ever see”—leaving him free to pen a captivating and, from his perspective, ideal shape. “The version we unveiled is the final design. Unless we get it underway and it takes off,” he jokes.

• Aston doesn’t mind if you call it "insectoid": “I take that as a compliment,” Reichman says. “Insects are fine and delicate and detailed, and we assume that insects are fragile. But even a lowly-seeming ant can perform well above its height and weight class. They’re not delicate at all; they’re powerful beyond belief.”

• This is the first collaboration between Aston and Red Bull, but more are likely: Reichman described his collaboration with Newey as nearly ideal, a perfect blending of strengths. “It just worked,” he said. “Adrian is best at getting to a finish line first. We are great at building road-going cars, production cars. And making beautiful things.” When asked to describe their working relationship, he summarized it as a collaboration of equals. “It’s a perfect fifty-fifty job,” he said. “If Vulcan is Aston Martin design with Aston Martin tech, AM-RB 001 is Aston Martin design with Red Bull tech.”

• It’s all about the negative space: Target weight hasn’t yet been determined, but the car features an obsessive attention to shaving weight and carving out features that harness the tempestuous air flowing around the car at speed. “There is almost more negative space in the design than positive space,” Reichman says.

• It will cost about one million pounds: Aston will not confirm an exact price, but my sources steered me toward a number that begins somewhere above 1,000,000. “At that price,” Reichman says, “you can’t have absolutely everything—but very few holds are barred.”

• It likely presages a line of mid-engined Aston vehicles: Aston is in the midst of it’s “Second Century” plan, a pathway to make the company stable and profitable as it embarks on its second hundred years of existence. (Andy Palmer, Aston’s gloriously plain-spoken CEO, said that “Internally, the Second Century plan is called 'Shit or Bust.'”) This includes a diversification of product offerings to include at least seven separate model lines, one of which is now likely to be mid-engined. “Everything we do in Special Projects is in part a foretelling of something to come,” Reichman says. “We never do something and then forget it. One-77 you can see as the start of the styling expression that became DB11. That’s how we get benefit for the brand,” he explained. “AM-RB 001 is a precursor of the idea of a mid-engined vehicle being part of the lineup for the Second Century plan. But far out—in the 2020s and beyond."