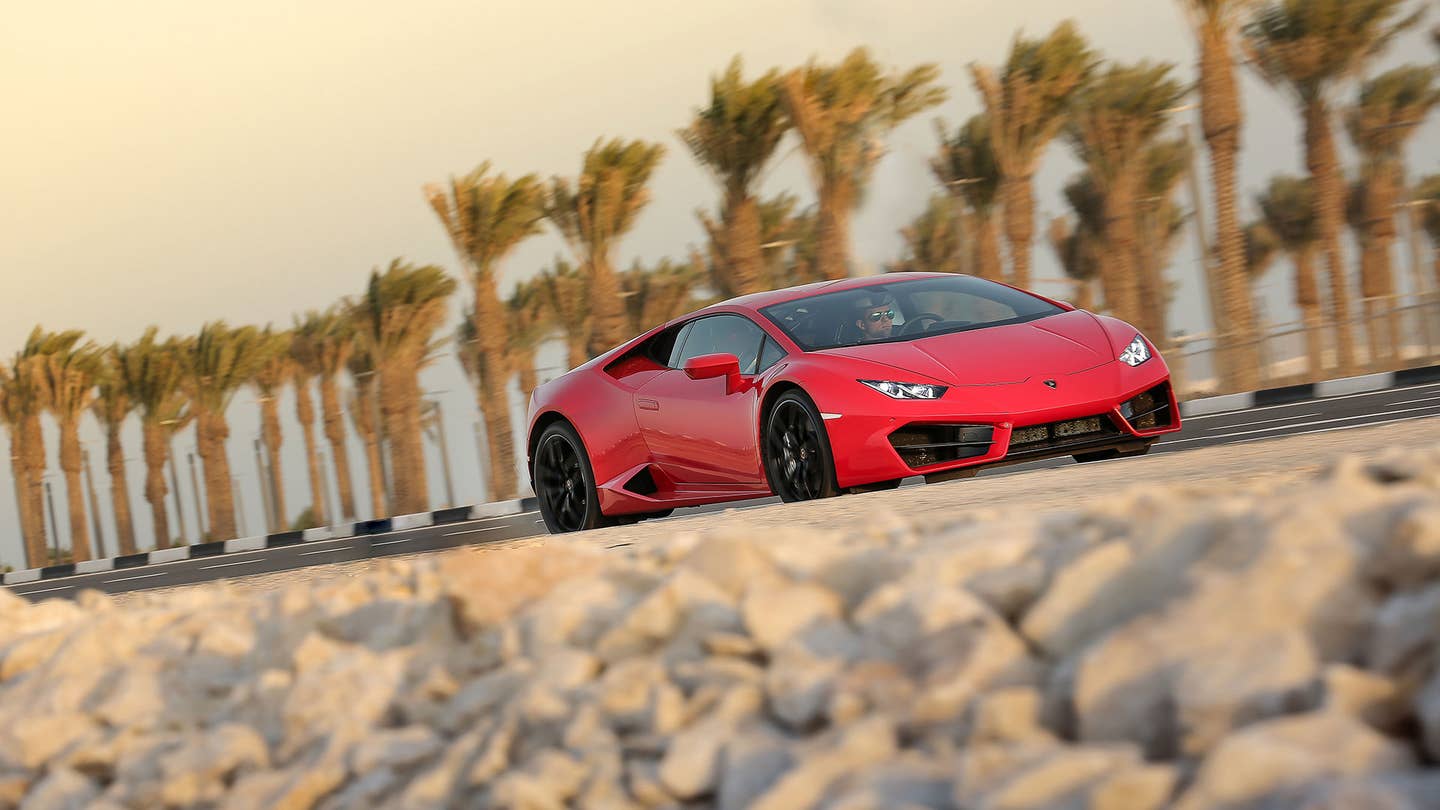 Several years ago I wrestled my way out of a 1988 Lamborghini Countach after three days behind the wheel and found myself a changed and cynical man. That such an overwrought celebration of factory-approved flaws—pinhole visibility; a warped, nonsensical cockpit imagined by a dim child or a vindictive drunk; the athletic grace of a plough horse on ice skates—was allowed into the world at all seemed a vaffanculo to auto enthusiasts and, on a larger scale, to all of humanity. So when The Drive told me to fly to Qatar to test the new RWD Lamborghini Huracán LP580-2, I thought: Sure, let’s go see what the vulgarians have been up to.

Qatar is mostly a flat expanse of sand dotted with squat, dun-colored buildings and a hazy skyline punctuated by cranes—precisely the type of landscape where a row of phosphorescent orange supercars would stand out to great effect. Oddly, the neat formation that greeted us along Losail International Circuit’s pit lane was mostly a sedate affair of dark grays and whites and reds. The lone Mantis Green model only served to highlight the Huracán’s relatively restrained design; it’s hard to describe a robot-shark-missile as “subtle,” but this car could be that, in a sense.

There are minor stylistic differences between the all-wheel-drive LP 610-4 and the new RWD coupe—more substantial tail lights, slightly less aggressive front air intakes—not to mention a 30-hp subtraction from the same 5.2-liter V10, happily accompanied by a 73-lb. weight cut. Other differences: tweaked steering, lower rev limit (at 8500 rpm), model-specific Pirelli P Zeros, top speed detuned to 199 mph from 202. (Note: Let’s all agree you do not need more than a 199 mph top speed, because you don’t.) Also, a lack of front driveshafts means a more slide-happy 40:60 front-to-rear weight distribution.

That pro-drift arrangement is essentially the stated point of this variant. Springs, dampers, and roll bars are dialed down for better sensitivity to weight transfer, “Power Oversteer” is listed as one of the car’s five pillars, and the vehicle presentation could have been 50 slides reading: “This car is for doing lewd, tire-melting drifts you dolts!” Walking to pit lane, I suddenly felt bad for once having thought uncharitable things about this wonderful, generous, noble automaker.

By the time I roller-coasted through the quick, sweeping right-left-right of Losail’s 7-8-9 turn combo, playing puppeteer with the light, lovely steering as the pliable suspension danced underneath me, I was considering proposing marriage to Lamborghini R&D head Maurizio Reggiani. Losail is a flowing, wide, mostly flat and deceptively fast MotoGP circuit that’s perfect for unadvisable, mid-corner pedal experiments. Leave the clean lines and lap times to the AWD coupe and just drive this car hard with malice in your heart. Preferably in Big Goofy Slide mode (aka Sport; Strada and Corsa are also on tap) where the Lamborghini Piattaforma Inerziale (LPI) system allows the most obscene abuse.

About that system: After my first set of laps I had the disheartening recollection that I’m not as good a driver as the car made me feel. The Huracán’s slides are progressive and easy to control, and mine weren’t always textbook-perfect, but I was never smacked by the shudder-thunk of stability control kicking in mid-stupid and had the uncomfortable notion that I was dealing with a sneaky, unseen TFC (Talent-Flattering Computer). Reggiani confirmed it. Unlike normal ESC, which bases intervention on a continuous calculation comparing vehicle direction to steering input—in other words, what the driver is asking the vehicle to do versus what the vehicle is actually doing—the LPI is comprised of three gyroscopes and three accelerometers, one pair for each physical dimension. Placed in the vehicle’s exact center of gravity, it negates the need for calculations by providing a hard data point in real time; it’s similar to systems used in fighter jets and doles out an extremely generous amount of rope without actually letting you kill yourself. It makes for proper fun.

Other good things: Visibility is phenomenal for a car with the basic configuration of a bevel chisel; with less unsprung weight up front the nose can be aimed like a laser pointer, and you can adjust the line with surgeon’s work from your right foot; optional carbon ceramic brakes and magnetorheological dampers. Not so good: In an otherwise understated Lambo design the interior could double as Crazy Ferruccio’s Toggle-Switch Emporium.

But overall this is Lamborghini—once the more-is-more company for guys who thought louder (shirts, sunglasses, rhinestones, pick-up lines) and bigger (watches, cufflinks, rear wings, breasts) are by nature better—making a product that’s about, well, less. Less horsepower, lower price (reportedly just skimming the $200,000 floor), fewer superfluous angles, less of the bombastic overcompensation of the perpetual Italian supercar underdog. The end result is unquestionably more: more engagement, more everyday usability, more fun for its own sake, a four-tires-a-day smoking habit. If halo cars are about a company’s ambition, volume cars are about its execution, using the tools of the present to construct a vision for the future. With that in mind, I stepped out of the latest Huracán a changed and more hopeful man indeed.