We’ve been hearing rumors and vague hints about a new and improved 2018 Honda Gold Wing replacing the long-in-the-tooth GL1800 model that’s seen few changes since it was introduced in 2001. At long last, the all-new Gold Wing was officially unveiled on Tuesday and it confirms a few things we suspected while revealing some new details.

Take one look at this bike and it’s easy to see it’s been completely redesigned. It’s a lighter, narrower bike than the outgoing model giving it more of an athletic vibe and less of a “couch on wheels” persona. The new bike looks like the old one hit the gym and slimmed down while toning muscle. Don’t let the sporty look fool you, this is still a true touring bike in every way.

Aside from the new look, this new Gold Wing is packaged a bit differently than previous models. Along with it’s slimmer overall profile, the engine is lighter and more compact sitting farther forward to optimize weight distribution. It’s a liquid-cooled 1,833cc flat-six that sheds 13.7 lbs when equipped with a six-speed manual transmission (more on that later) and has four valves per cylinder. 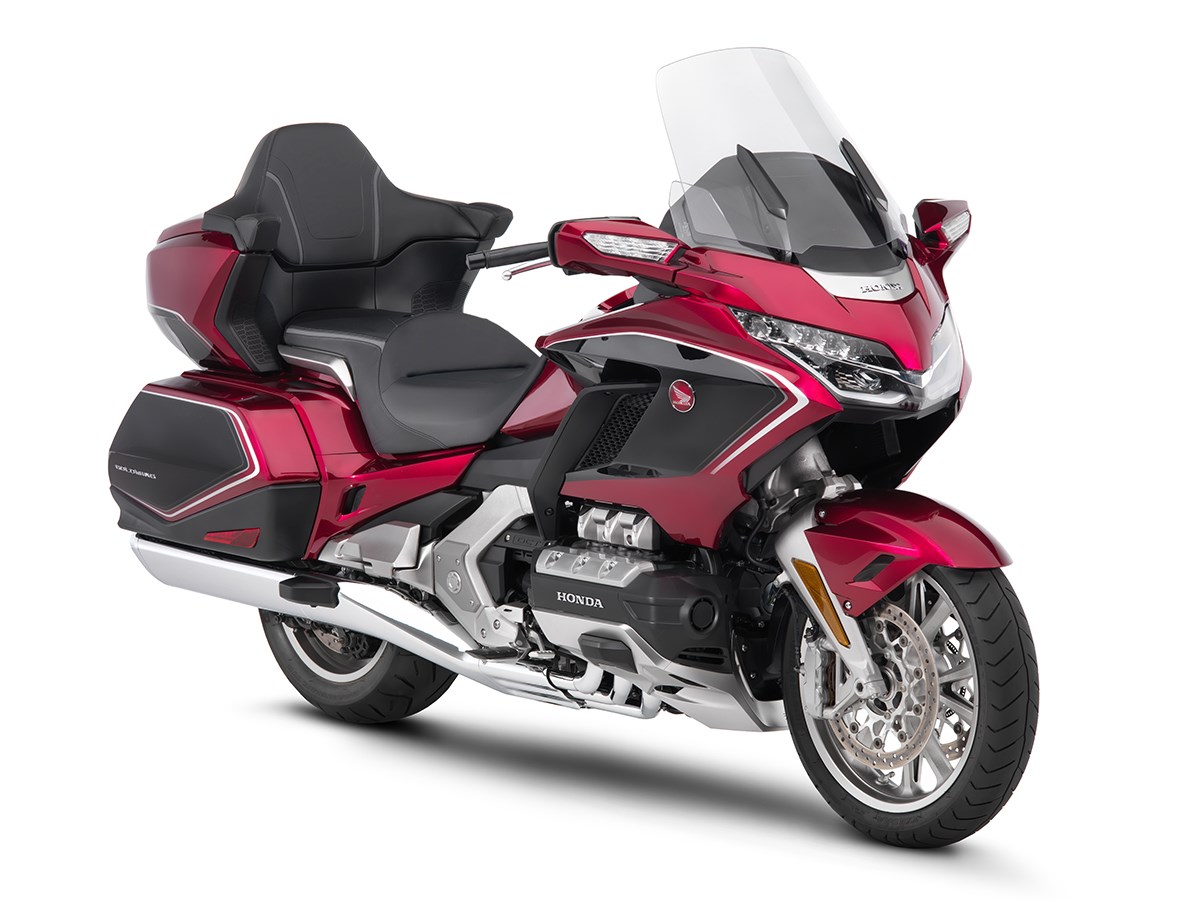 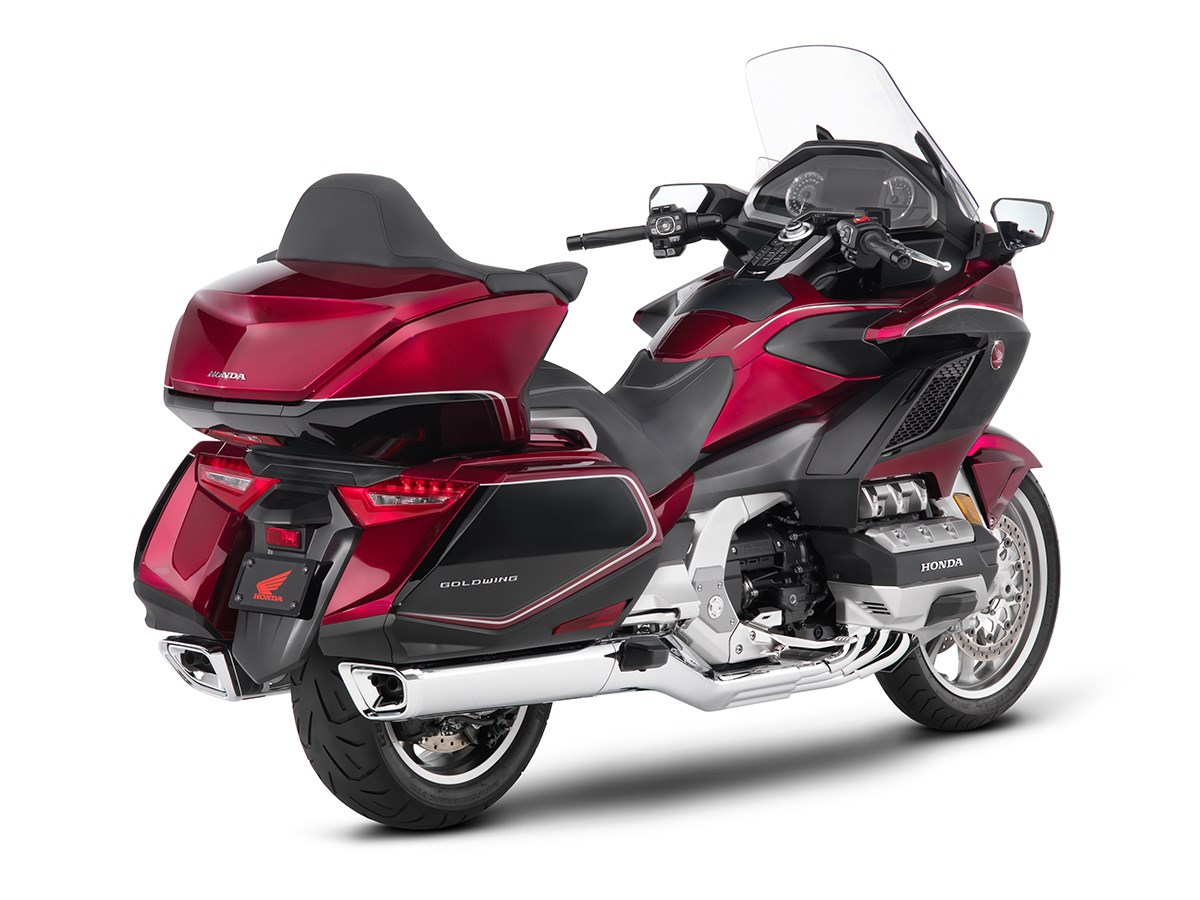 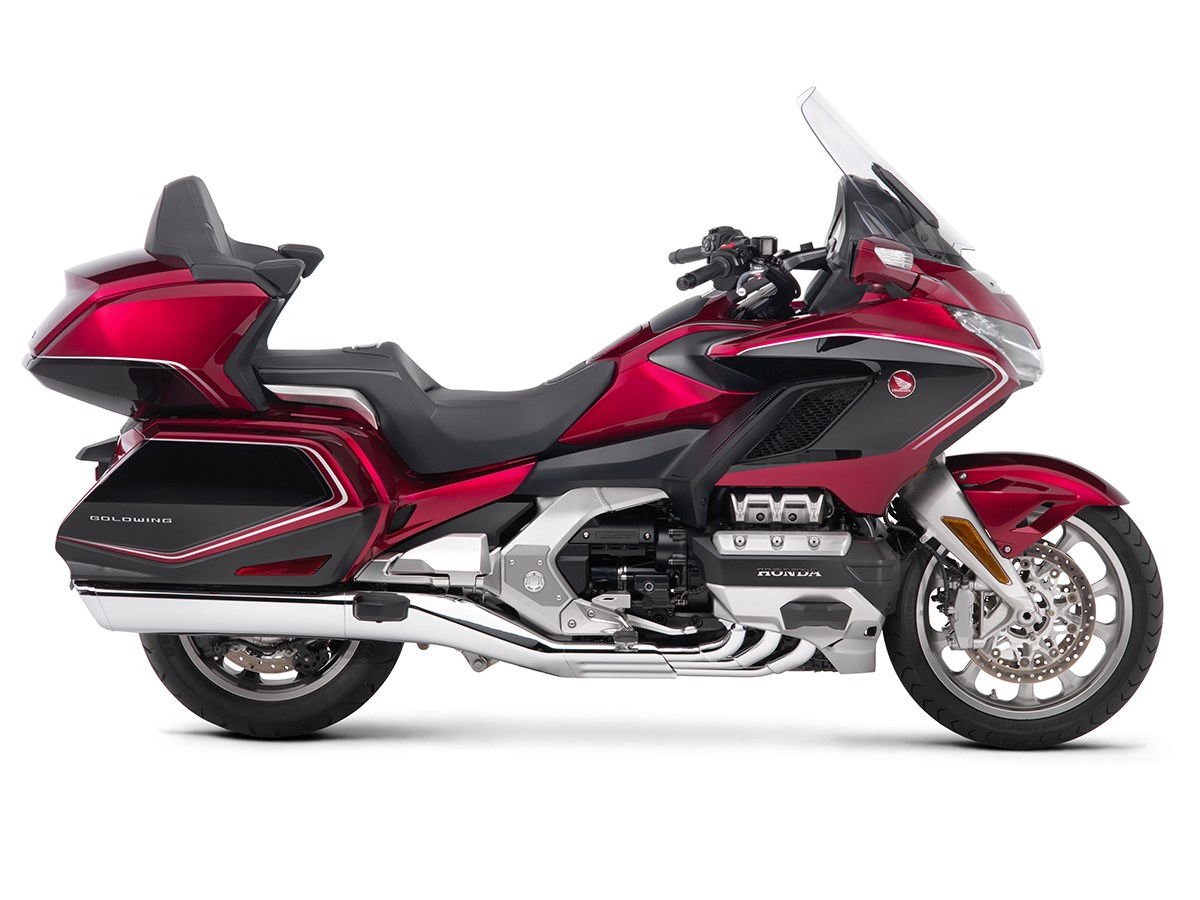 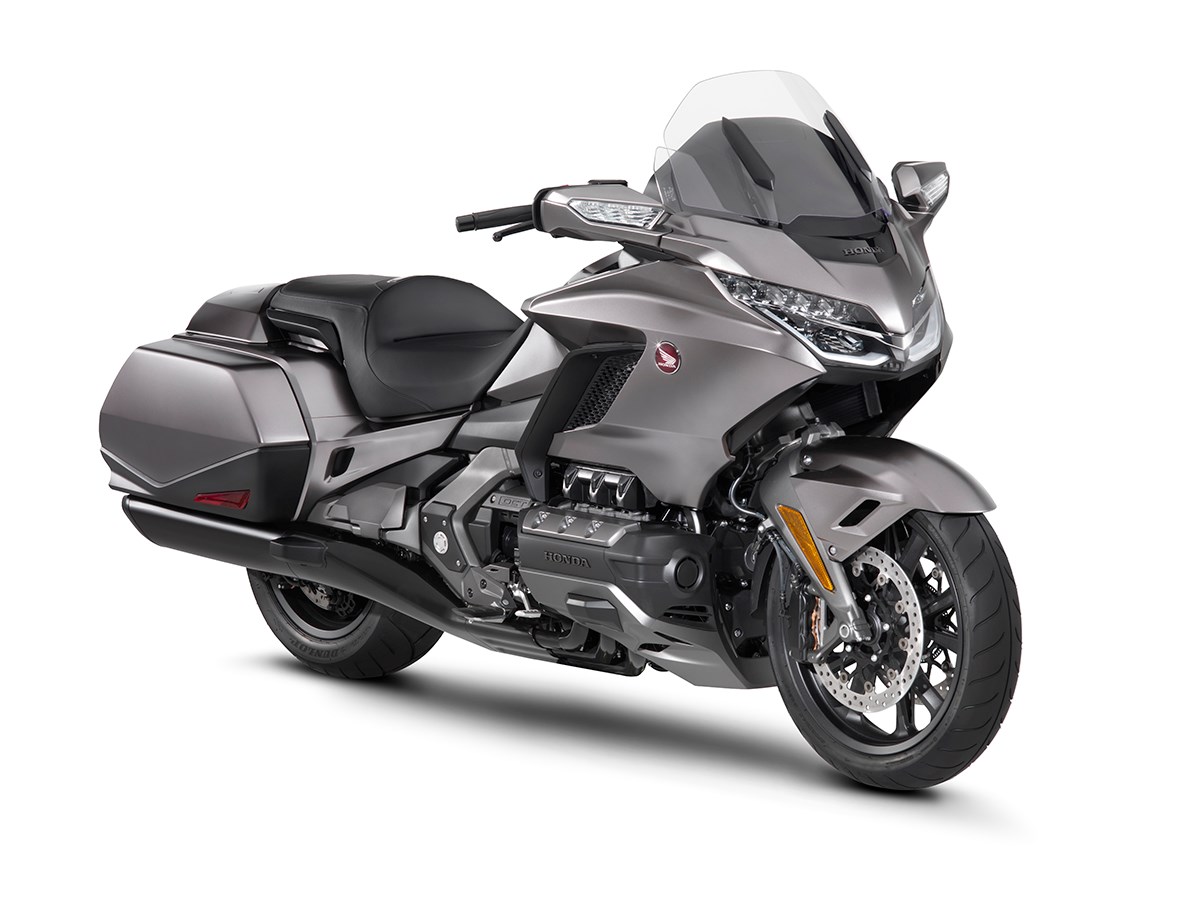 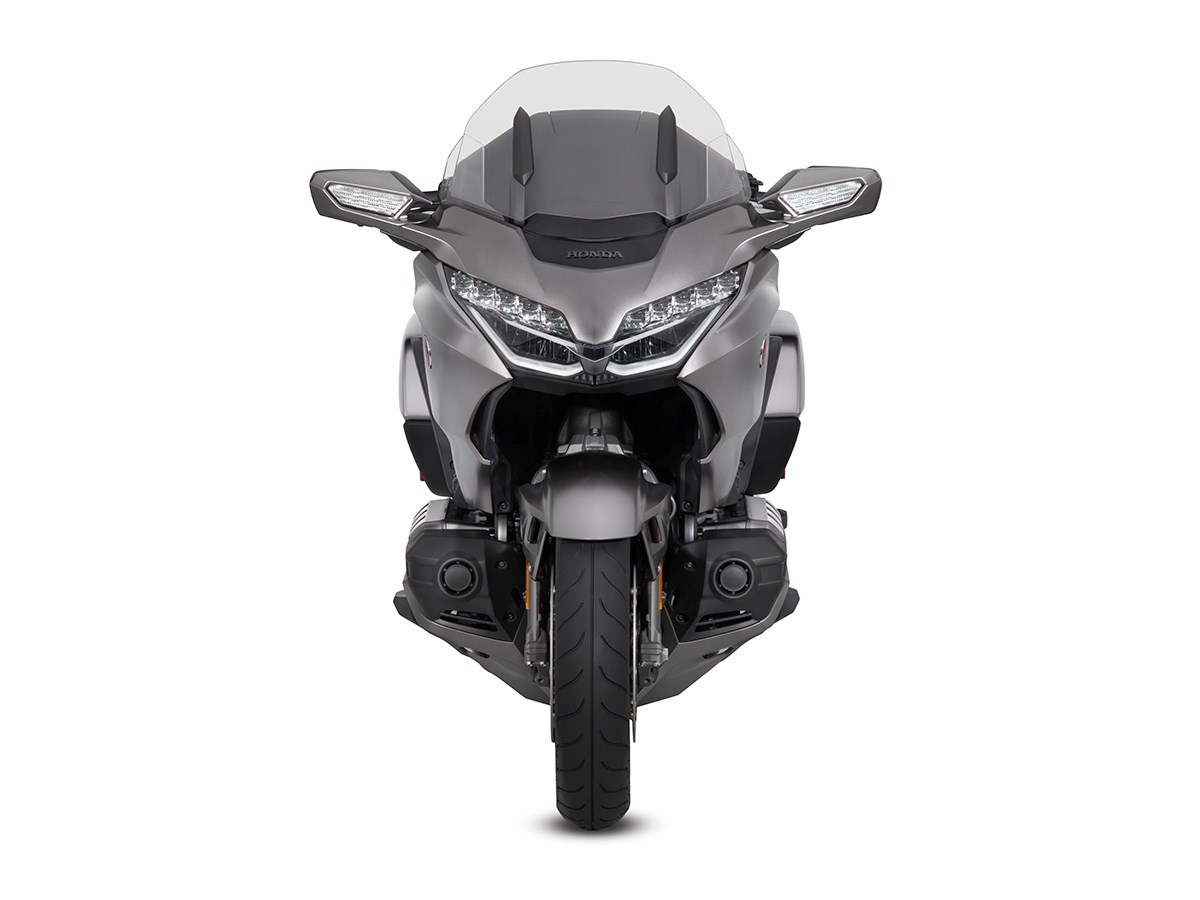 The new engine uses the Unicam head design used in some Honda off-road bikes which has one camshaft actuating two intake valves while the two exhaust valves operate through low-friction roller rocker arms. This unique design is a good way to efficiently use four valves per cylinder with just one overhead camshaft. It makes for some nice weight savings as opposed to a Double OverHead Cam setup. The new bike is so much more efficient than the old one, the fuel tank capacity is down a fairly significant 1.1 gallons, but Honda claims the fuel range on a full tank is the same.

One of the hottest rumors circulating about the new Gold Wing is the availability of a dual clutch automatic transmission. Honda has now confirmed a seven-speed dual-clutch transmission which includes forward and reverse Walking Mode which will make the bike easy to handle at low speeds. This should be much easier to park than most Gold Wings.

A new double-wishbone suspension sits at the front of the bike which will soak up bumps while contributing to making the bike more compact overall. ABS is standard and the front brake rotors have been upgraded to 320 millimeters with six-piston dual calipers. 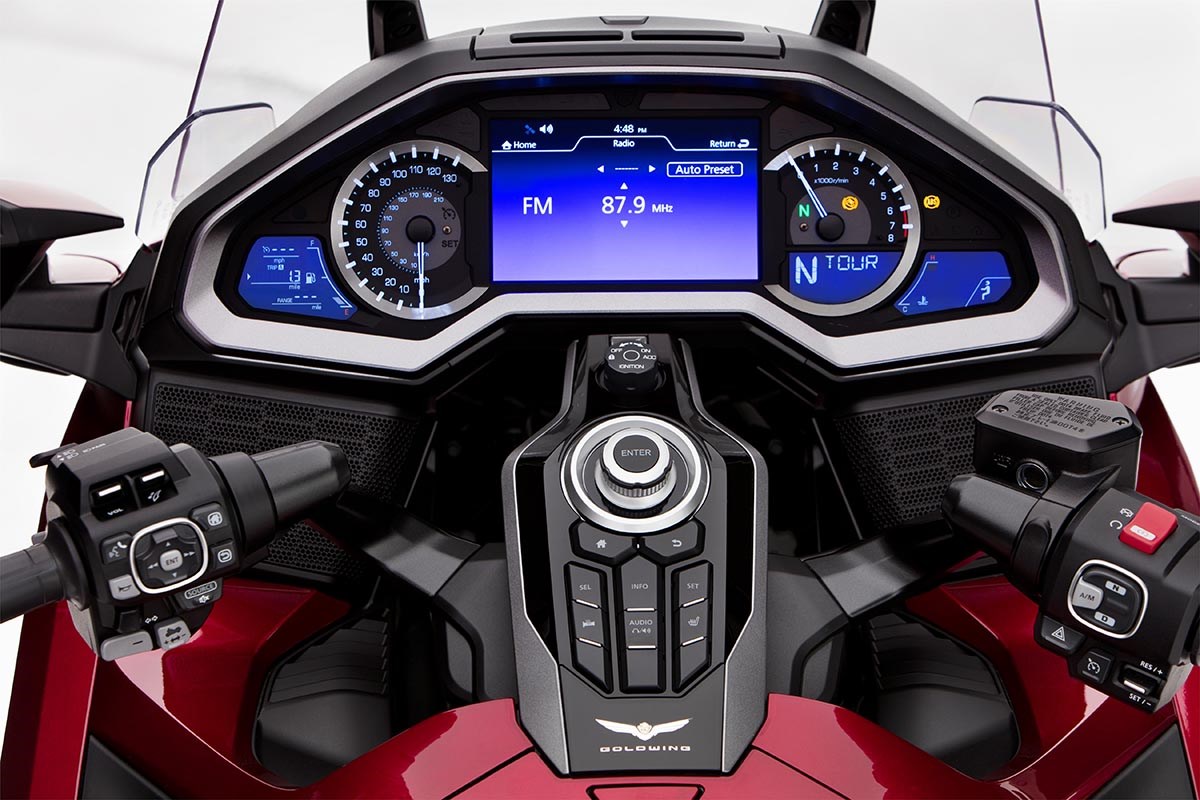 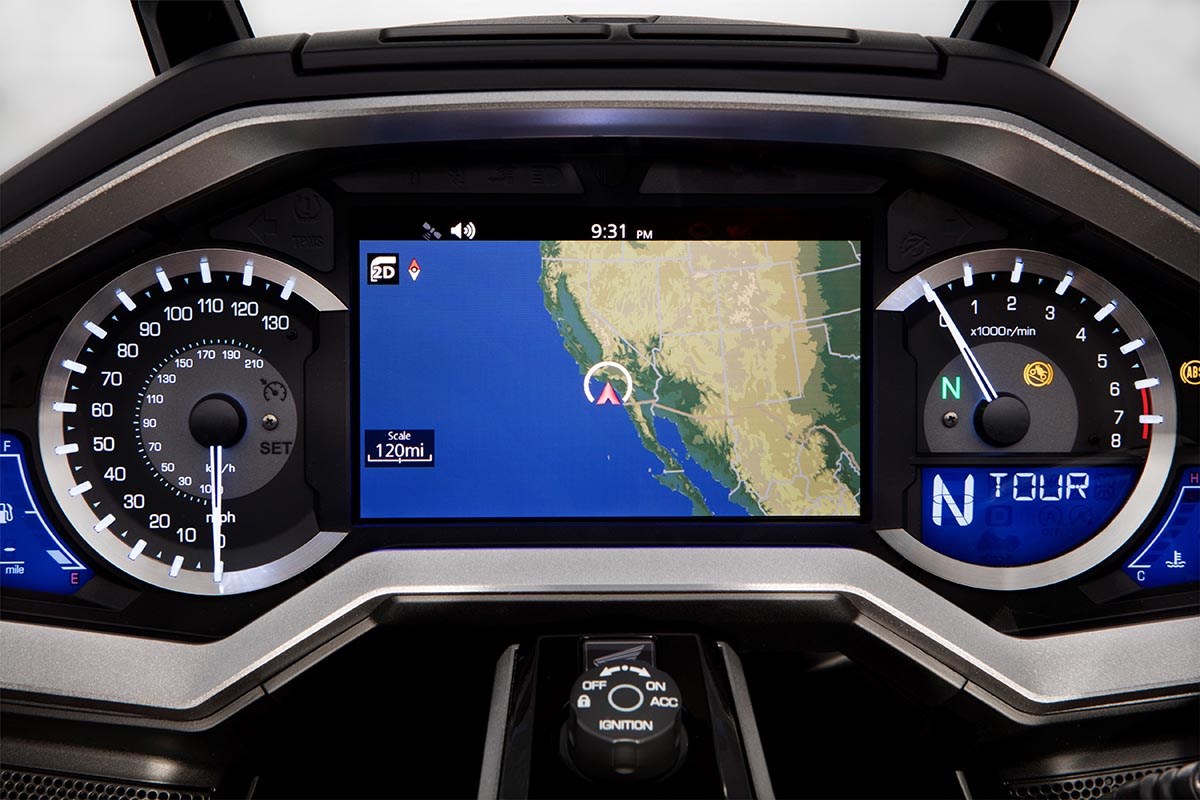 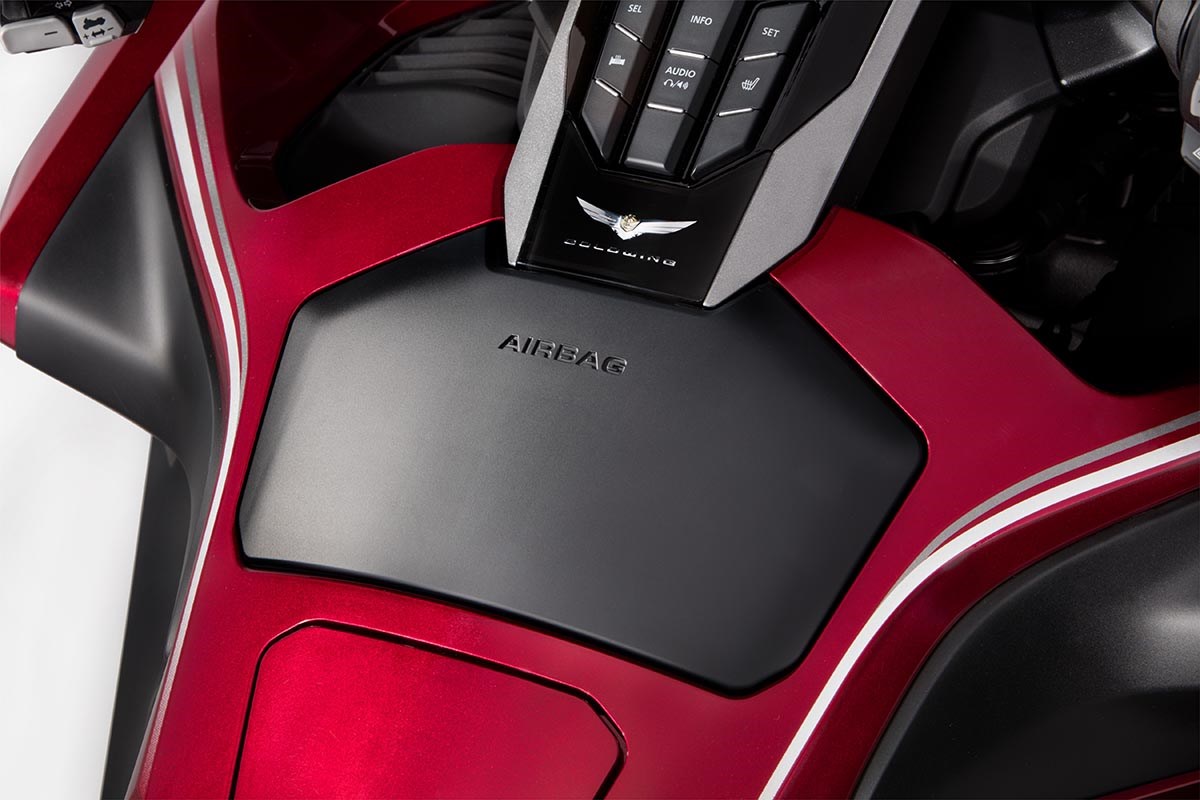 A throttle-by-wire system gives the new Gold Wing four riding modes; Tour, Sport, Econ, and Rain. All four are pretty self-explanatory. In terms of technology, the star of the show is the gorgeous seven-inch infotainment system. There is a ton of information in this cockpit. The speedometer and tachometer are still analog but the big screen in the middle is where you control the audio system, navigation (which is standard on all models), rider aids, Bluetooth, and Apple CarPlay (BikePlay?) which is an industry first. Honda says Android Auto is on its way via a firmware update at some point.

Two versions of the Gold Wing will be available when the bike comes out in February of 2018. There’s the standard Gold Wing and the Gold Wing Tour. As its name suggests, the Gold Wing Tour is better equipped for long-distance touring. Upgrades on the Tour model not included on the standard bike include a taller power-adjustable windshield, a top case in addition to the hard saddlebags, rear speakers, electrically adjustable suspension, heated grips, a center stand, and an available airbag.

We’re thrilled to see Honda finally coming out with a significant upgrade to the beloved Gold Wing. This is a thoroughly modern touring machine that’s sure to take the fight to new competitors like the Yamaha Star Venture and Star Eluder. It should be on the short list for anyone in the market for a new touring motorcycle in 2018.