A bipod is a simple tool yet very effective in supporting and stabilizing your rifle when shooting. This gadget helps to eradicate common human errors, improving shooting accuracy. Since there are several types and makes of bipods in the market, it can be hard to choose the right one. To simplify this process for you, we have reviewed the three best bipods on the market.

A traditional bipod is one that has simple support on two legs to allow the weapon to be held horizontally. This type of bipod allows you to fold the legs to provide easy movement and still keep the weapon in a fixed position. Depending on the bipod you have, you can adjust the bipod’s legs in different shooting positions. The good thing about traditional bipods is that they’re very popular and you can find them online for a good price. Also, most of them work with a solid sling stud.

Monopods are very similar to a conventional shooting stick (single leg shooting platform). Its function is to act as a solid base for the rifle to rest. These are mounted directly on the rifle system and as long as the weapon is not in use, the monopod can be folded. This type of bipod can be adjusted around 4.5-5.5 inches. The disadvantage of the monopod is that it cannot be connected to rotating mounts, so its positions must be restored to change the shooting angles.

Grip pods are those bipods that are implemented from the front handle mounted on the front end of the rifle. These are shooters’ least favorite bipods, especially for the military since the handling of heavy machine guns is slow.

B&T Industries was founded in 1997 to bring novel ideas to shooting sports. In January 2000,  the company managed to launch its first prototypes. Since then, it has continued to grow and create ideas for devices for professional and amateur shooters while maintaining its quality and durability standards. One of its best bipods is the AccuShot Atlas Bipod Standard.

This company was founded in 1999 by Magpul, a U.S. Marine who built his company based on designing and manufacturing existing polymer magazines and other accessories. Therefore, it was not surprising that he also began manufacturing bipods with the use of polymers, combining steel and aluminum. Magpul’s bipods are recognized worldwide for their high strength and durability. We recommend the Magpul Rifle Bipod.

Owned by Leapers, Inc, UTG is based in Michigan. Since 1992, UTG has been designing equipment for shooting and artifacts for hunting. The company began to produce systems of assembly and stocks of polymers in 2011. UTG Tactical OP Bipod is one of its best bipods.

Rotating bipods that are easy to adjust will make a difference in the field. The legs should be able to extend and, at the same time, lower easily so that when adjusting your line of sight, the process is fast and efficient. On the other hand, a bipod must be easy to put in place, as good bipods must be simply attached to the rifle to configure it without any problems. The bipod must remain firm while focusing on long-distance shooting.

The bipod must adapt to your needs, so it’s really important that you clearly know how you will use it. If you prefer to sit, wait, and take things easy, you should get a bipod that does not adhere directly to the rifle. 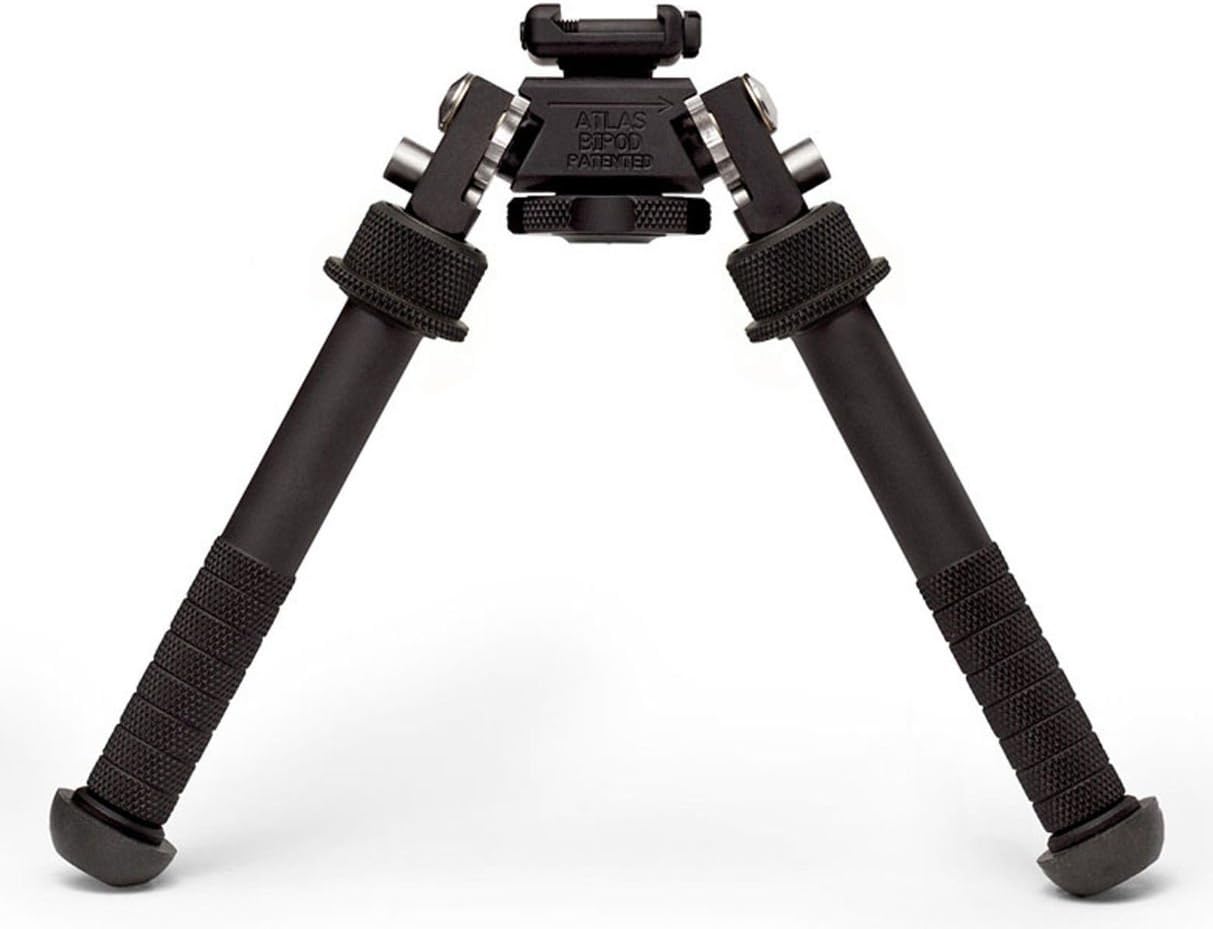 As our best bipod overall, the AccuShot Atlas Bipod Standard is a high-quality and robust gadget. It’s made with a combination of aluminum and high-quality steel to improve the grip on any Picatinny rail. This bipod has the ability to rotate and tilt 360 degrees, allowing you to shoot in any direction without moving the weapon. Its legs are adjustable up to nine inches. It is lightweight, rust-resistant, and very durable.

However, it has some negative aspects. Some users claim that the legs may be loose. Also, the price range may be a bit high, as it is one of the most expensive on the market. 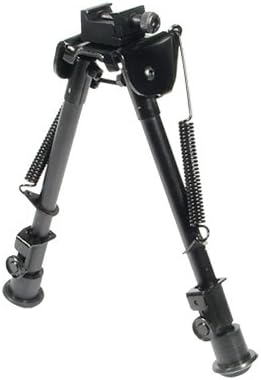 If you are looking for a bipod that combines cost and quality, this is the one. It is inexpensive, but it’s made out of high-quality aluminum and steel. It includes five different length settings for different shooting conditions. This tactical bipod includes rotating tacks and special assemblies that adapt to the measurements of the rifle.

The combination of its materials helps prevent oxidation and, at the same time, guarantees its durability. This tactical bipod can be used quite easily since it is lightweight. It is also easy to install, with its spring-operated legs.

Some things must be taken into account before buying this tactical bipod. Some of its parts can loosen over time. Also, this bipod has difficulty with the recoil of some heavy hunting rifles. 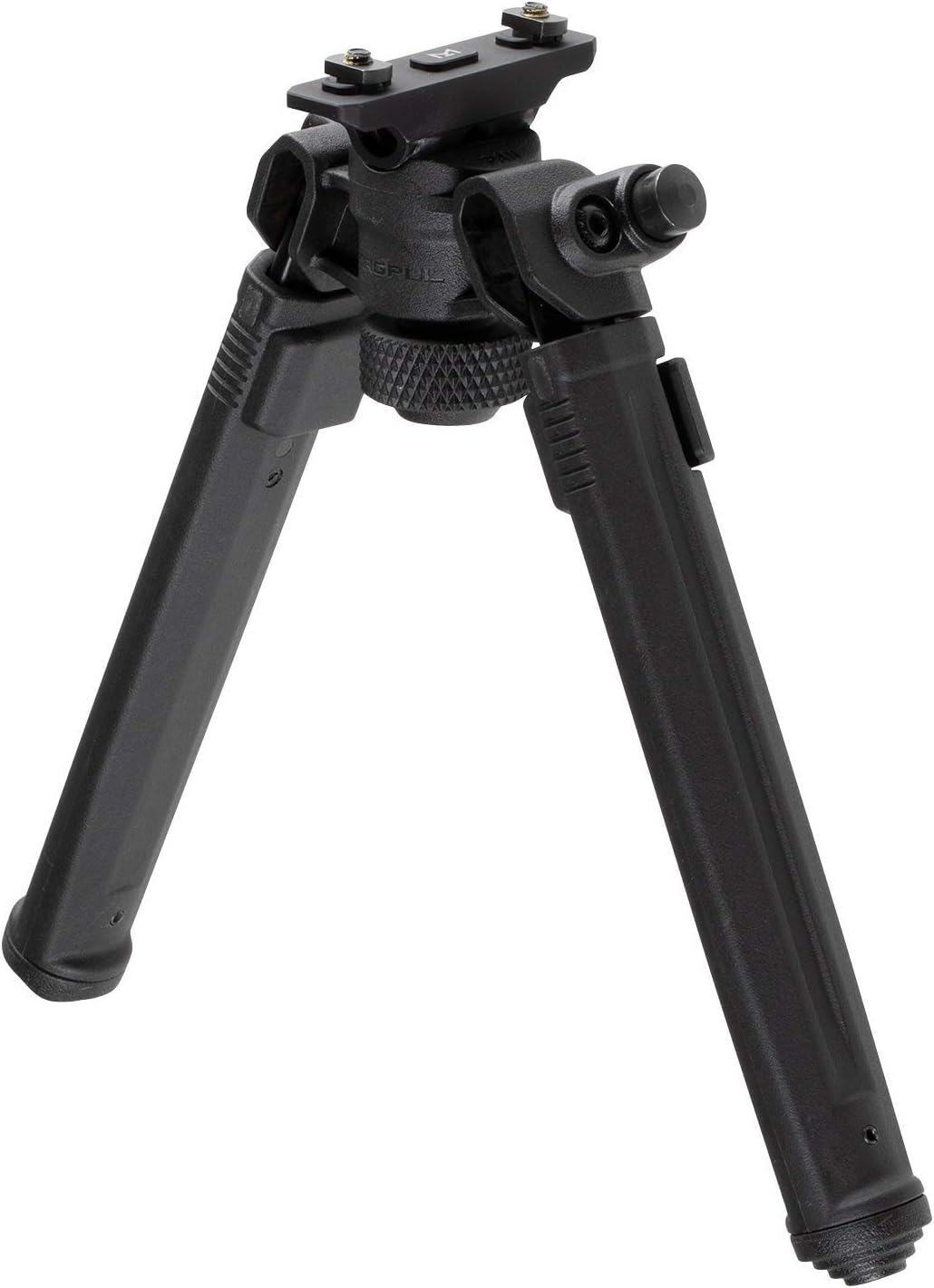 This is a mid-range bipod, but it is quite elegant. It is not only designed to reduce movements, but also to hide its mechanisms and hardware. It is made of 6061 T-6 anodized aluminum and injection-molded polymer to make it lightweight but durable. It can be easily adjusted with one hand. Also, it can extend up to four inches.

This Magpul bipod, however, is not suitable for very heavy rifles, a problem that is very common with some brands. Also, some components may become loose over time.

Q: Why should I use a bipod?

A: Without a bipod, you tend to use your elbow to support your rifle. This can result in a poor shot if the arms are not firm enough. A bipod stabilizes the weapon, ensuring a balanced shot in a comfortable position.

Q: Does a bipod affect accuracy?

A: Yes, a bipod affects shooting accuracy positively. The tool supports your barrel and the end of the gun to ensure a steady shot. However, if the bipod is not properly installed and held, it may affect your accuracy negatively.

Q: Can I use a bipod when hunting?

A: A bipod is good for enhancing your shooting accuracy in any place. However, it is not advisable to carry it on your hunting trip, since it will increase the weight of your luggage. Also, animals are constantly moving at high speeds and it would be difficult to get an accurate shot on a bipod.

For quality and sturdy bipod that will serve you for years, we recommend the AccuShot Atlas Bipod Standard.

If you are on a budget and still need a bipod that works efficiently and lasts a long time, consider the UTG Tactical OP Bipod.