This story will make you flip your lid! 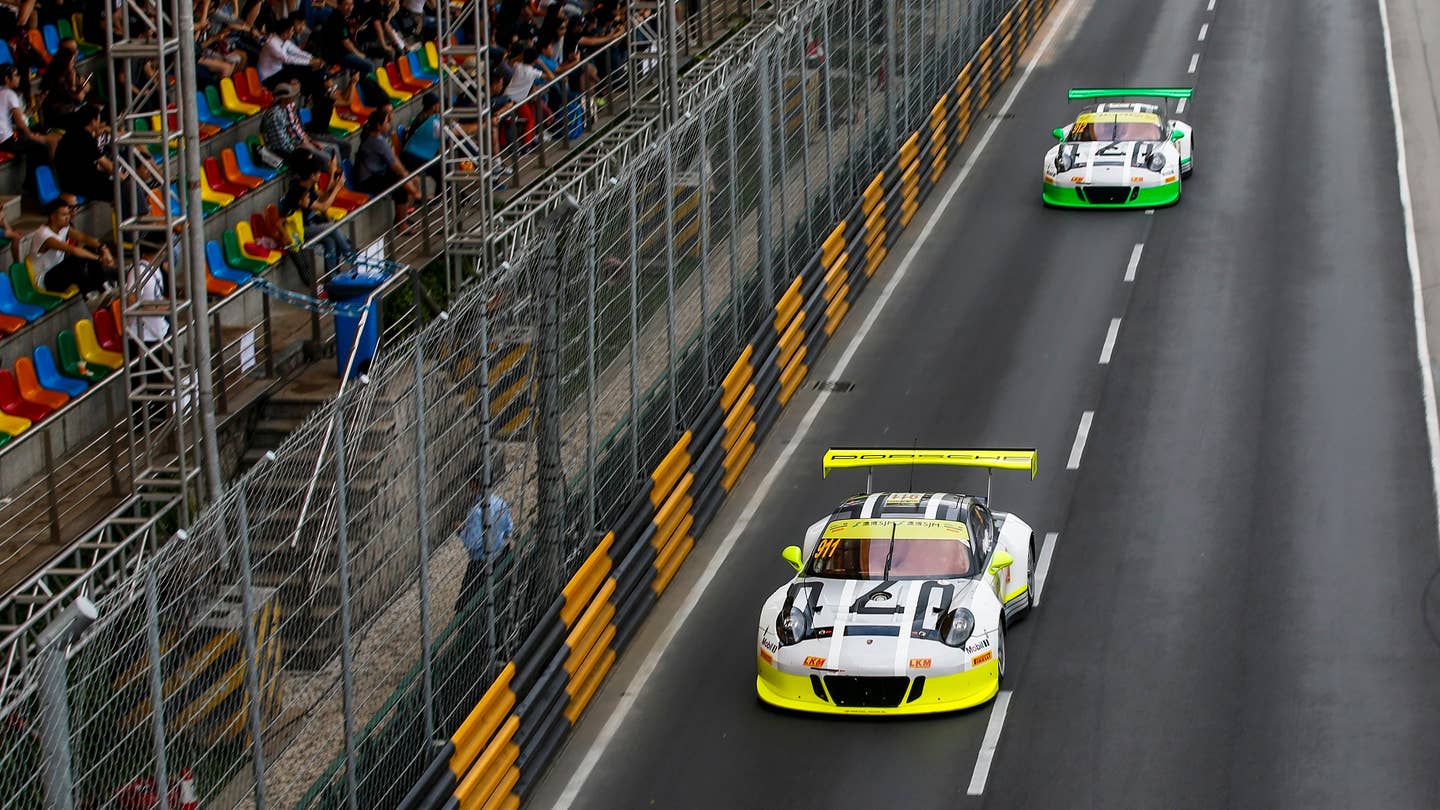 This weekend was the most bizarre two-lap world championship race, possibly in the history of motorsport, as it ended in the middle of the second lap with the winner of the race crashed and upside-down, and with a Porsche in the lead of the race itself. Such is Macau and the interesting dynamics that come to play during this knock-down, drag-out street racing brawl. You see, Macau is a track that is primarily optimized for motorcycle racing, and perhaps the odd Formula 3 race, but it has no business hosting touring cars and GT3s as it does. The Macau circuit is far too narrow a bull ring for these ever-larger GT3s to navigate properly without incident after incident. Regardless, the FIA holds the single-weekend world championship of GT3s during the Macau Grand Prix weekend. It should come as no surprise that the final GT3 race of the weekend, the one to decide an international champion, was marred by two red-flag-inducing crashes in two competition laps.

Lap one saw the race stopped just as it began when Ricky Capo smashed his BMW M6 into the wall at Fisherman's Bend, bringing out a red flag to allow workers to repair the safety fence. As soon as the repairs were affected, the race picked back up under the safety car for three laps. When the green flag waved again on lap 4, Audi driver Laurens Vanthoor had the lead (from pole), ahead of Porsche drivers Earl Bamber and Kevin Estre in close quarters. Less than one lap later, finding their way onto the main straight, the incident depicted in the video below happened. Bamber, ever the hard racer, pushed his way past Vanthoor's Audi to nab the lead and mount a charge. Unfortunately, just a split second later, Vanthoor clipped the inside wall and smashed his Audi into the outside wall, then riding up and flipping over. In case you didn't quite understand what happened there, check out the video below for the full effect.

So, with the Audi crashing out, that puts Bamber in the lead and Estre up into second, right? Not so fast. That car that ended up on its roof was announced the victor of the race. By the time the Audi was cleared from the track, there was only 4 minutes left in the time allotted for the race to happen, and they decided that instead of letting the race continue until the end of that time frame, they cancelled the remainder of the event and gave the trophy to the guy who was in the lead on the last completed timed lap, which was Laurens Vanthoor. The logic to support this is minimal in my mind, but that's what the FIA decided, and that's what will go down in the record keeping books as what happened. After two incomplete laps of racing, Audi was handed the GT World Cup. Ludicrous. Incredulous.

Even eventual victor Laurens Vanthoor - "I’m happy and relieved about not having been injured. My accident happened in one of the fastest track sections. I made a mistake and caused an accident, and won nonetheless. I’m still not quite sure about how to rate this victory.”

Dr. Frank-Steffen Walliser, Head of Porsche Motorsport - “Nobody will forget this race in a hurry. We saw a clear result on the track. Earl fought hard for the lead spot with a sensational overtaking manoeuvre, it all went without a hitch, without any cars touching. The accident with the Audi unfortunately led to the race being stopped. Our drivers and the team put in an extremely strong performance in Macau, but they haven’t been rewarded with the well-earned result. We have won everyone’s hearts, but in the face of such bitter moments, this is poor consolation.”

Kévin Estre, Driver 911 GT3 R #912 - “I was looking forward to an exciting race and I thought I had good chances. Our 911 GT3 R was perfectly setup. Unfortunately it didn’t work out as I’d expected. It’s a shame that we couldn’t offer the enthusiastic fans a better show. I hope that I can come back to Macau sometime and fight for victory.”