One man’s long-awaited project car went down with the ship—and sadly it wasn’t insured. 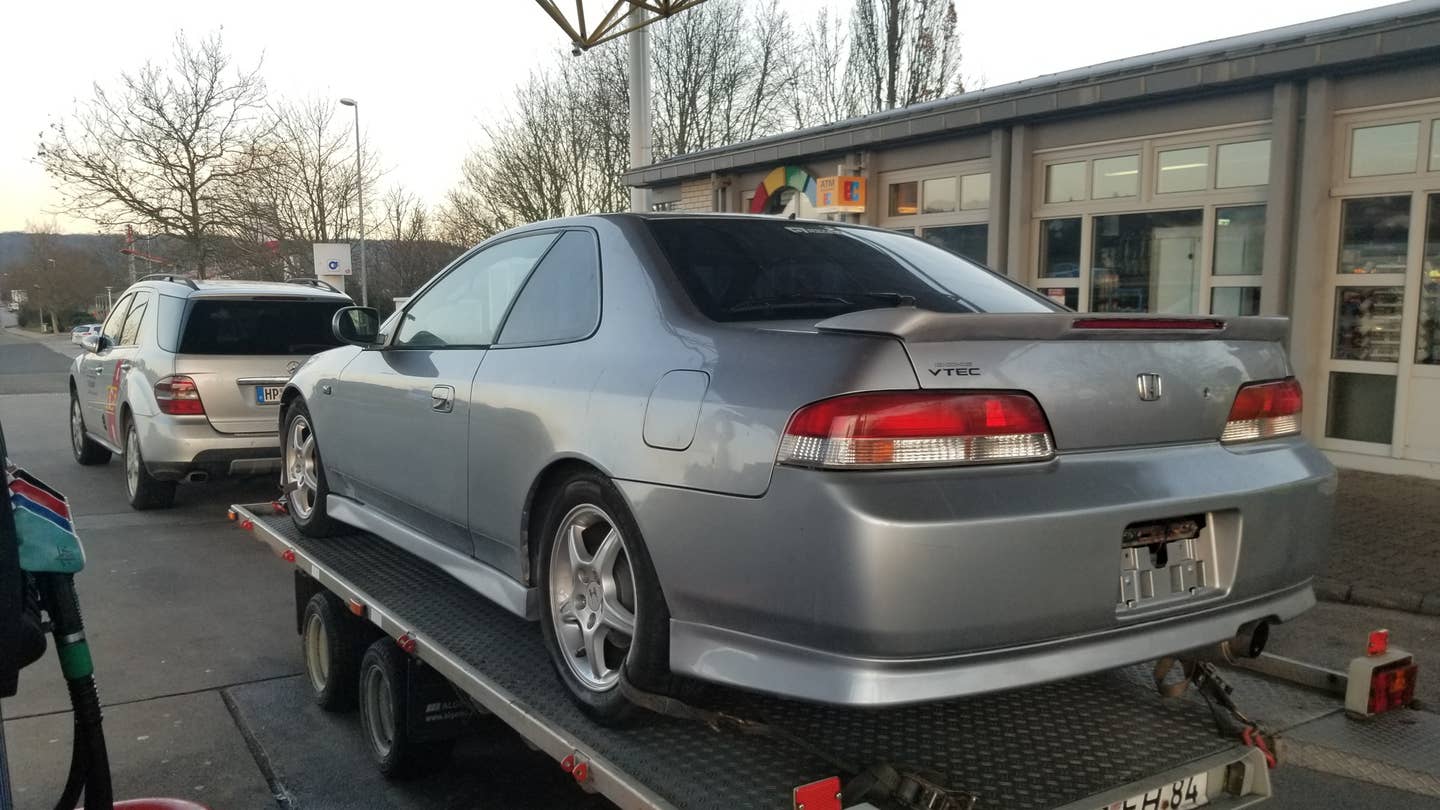 Nearly two months after the car carrier ship Felicity Ace sank off the coast of Portugal, the next steps are mostly sorted through. Thousands of new cars were lost, but they've largely proven replaceable; for example, Lamborghini lost a final run of Aventadors, but was able to restart production. But the release of the full manifest in April showed there were a few notable older vehicles aboard, including a 1996 Honda Prelude SiR, said to be the 65th example ever produced by Honda. That early-production rare model now rests approximately 9,800 feet under the Atlantic.

In a dramatic story such as the Felicity Ace's sinking, the world's unluckiest Prelude seems like a strange footnote in an expensive ecological disaster. Still, we were curious about how a privately-owned, relatively unusual Honda ends up on a commercial new-car-transporter and is lost in such a spectacular and headline-dominating fashion—and what it's like for the owner. So we reached out to him, a man named Gary Hawkins, and found this particular footnote contains a tragic project car saga of its own worth sharing.

Let's start with the car itself. The SiR trim was a limited-production run of the Prelude intended for Japanese markets—Hawkins estimates only somewhere around 3,000 were produced, and Honda only ever planned for a maximum of 5,000. The car was a silver-on-red, manual-transmission, 4WS model, making it Hawkins' desired spec and a rarity among Honda rarities. It was sold new in Japan and was exported to Europe, where it bounced around the continent for the past few decades before eventually making its way to Germany. That's where Hawkins bought it in 2016 and stored it to wait for importation, which it wouldn't be eligible for until it hit 25 years old.

Hawkins himself is a long-time Prelude enthusiast, having bought his first fifth-generation car over a decade ago. He currently owns two other Preludes but wanted to build his long-awaited SiR into "Honda's dream; the ideal vision of the car" with every possible option and OEM feature he could find for it. His dream was "a full restoration, with all brand-new OEM accessories" that he had been stockpiling for the past six years. "I even have a pillow for it", explained Hawkins—somewhere in his basement of Prelude goodies, he'd stashed a Japanese dealership's Prelude-branded OEM neck pillow that dealers would offer to buyers as gifts. All of this was capped off with his car itself, which was an $18,000 investment he'd been saving for years to buy.

Last Christmas, Hawkins flew to Germany to drive the car around the loading dock and prep it for shipping, which it was finally eligible for starting in 2022. It was the first and only time he got to see his Prelude. The car was loaded aboard an unspecified shipping vessel, and he didn't know it was the Felicity Ace until his shippers called him on Feb. 18, the day after the fire was first reported, and let him know there was bad news. His first question was obvious: Will insurance cover it?

Unfortunately, and to Hawkins' surprise, the shipper explained that the car wasn't insured. Due to miscommunication, the shipper had excluded insurance coverage, and so Hawkins was completely unprotected. He further explained that since his Prelude wasn't titled in the U.S. yet, it had no insurance stateside; while the Prelude was stored in Germany after his initial purchase in 2016, its inspection had expired, making it uninsurable in Europe. Hawkins showed The Drive his original correspondence with the shipping company and on those documents, insurance was listed as a line item in a full explanation of shipping costs. He noted "from all my correspondence with this company I understood all the pricing was rolled together," and so he paid assuming that the car was covered in the event of an accident during transit.

The shipper informed him that wasn't the case, and so the Prelude was just lost. Hawkins said, "As the ship was on fire they recommended I reach out and find a company to insure it," which was impossible at that point with the ship already burning. He hung onto the hope his car was spared the brunt of the flames until the ship sank a few weeks after the fire began. He realized at that point, "I'm now left with a car on the bottom of the ocean." He immediately tried to see if there was any recourse for his sunken Honda.

Hawkins reached out to the German shippers, Car Container Shipping, to try and see if there was any possible way to be compensated for the loss of the car; so far, he's had no luck, due to the insurance mishap. Legal options are limited, as well: "I don't know how to hire a lawyer in the U.S. to go after a company in Germany," Hawkins explained. The Drive reached out to the company via email for comment, but it did not respond. Despite his incredibly poor run of luck, he said he's not upset or mad at the company. He ascribes it to a simple paperwork mistake lost in the flurry of shipping agreements.

Hawkins refuses to dwell on the loss. "I'm now moving my efforts into finding another one," Hawkins explained to me. "I am going to end up with my dreams and my goals." I can only admire his tenacity and his good-natured spirit about the loss of such a long-awaited car—and a significant investment. I hope for both his sake and the Prelude community at large, he can find another SiR of his dreams.

The Race Is on to Save Burning Cargo Ship Full of Porsches, Bentleys, Audis and VWs

Nearly 4,000 vehicles are on board as the fire consumes the ship—and the electric cars it’s carrying pose an extra danger for firefighters.