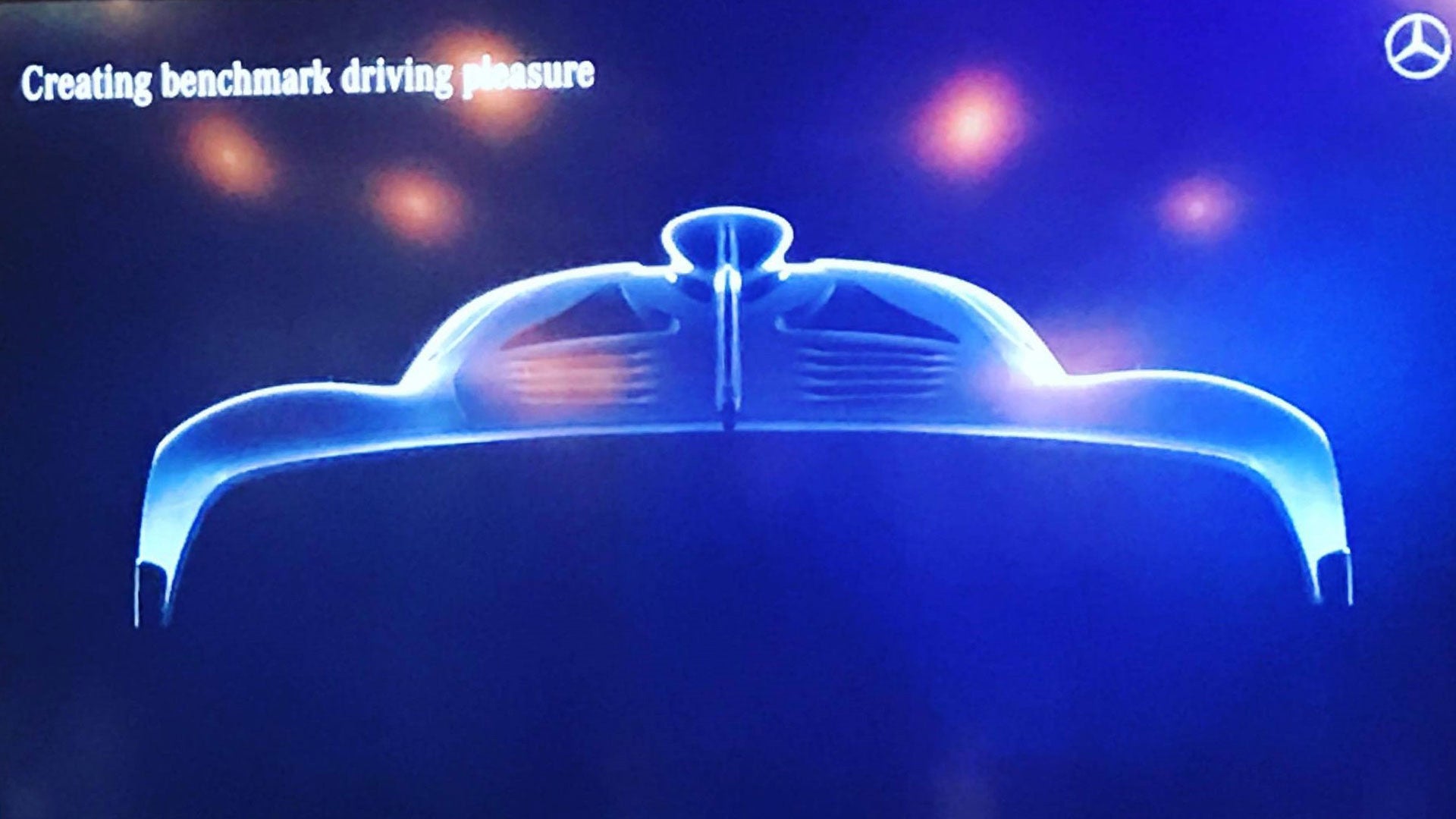 Mercedes-Benz's presentation at the CES show in Las Vegas was mostly concerned with the likes of autonomous vans and flying delivery robots, but the company was kind enough to throw the more performance-minded techies amongst the audience a bone. Tucked away within the company's presentation was the world's best look yet at the forthcoming Formula One-inspired Mercedes-AMG hybrid hypercar.

The company briefly showed a tantalizing picture of the car's tail end, accompanied by the tagline, "Creating benchmark driving pleasure." As you can see above, the image isn't particularly detailed—a fact not helped by the low-quality cell phone pic version of it that came to us via the GTspirit.com Instagram—but it does reveal a little bit about the car. For starters, there is what appears to be an air intake mounted atop the roof of the car, along with a pair of NACA ducts just behind it—both, presumably, designed to suck in air to feed and cool the mighty F1-dervied motor sitting between the passenger compartment and the rear wheels. Those shark-gill vents, presumably, are there to give the engine's waste heat a place to spill out.

There also appears to be some sort of spine-like structure running right up the centerline of the car; it's hard to tell exactly what it is, but our collective gut here at The Drive suggests it could be some sort of vertical aerodynamic element, much like the one seen on Audi's (now-defunct) Le Mans prototypes. (A guess further supported by the suggestion of just such a fin in this previously-released image.)

AMG has already admitted that its new hypercar will have a power-to-weight ratio of roughly one horsepower per kilogram, suggesting an output of at least 1,000 horsepower. Ridiculous as it sounds, the car will use a modified version of the Mercedes Formula One car's 1.6-liter turbocharged V6 connected to a KERS-like hybrid power unit. Top speed should be in the 220 mile-per-hour zone, the 0-to-60-mph dash should flash by in two and a half seconds or so, and thanks to F1-inspired aerodynamics, it should stick to the ground like a stubborn Spider-Man. The company will build between 200-300 units, and as often happens with hypercars, almost every example has already been spoken for, according to AMG chairman Tobias Moers.

Expect to see more of the Mercedes-AMG hypercar soon. It's due to be revealed sometime this year.