Time to start planning where you're going to install that drone landing pad at your house. 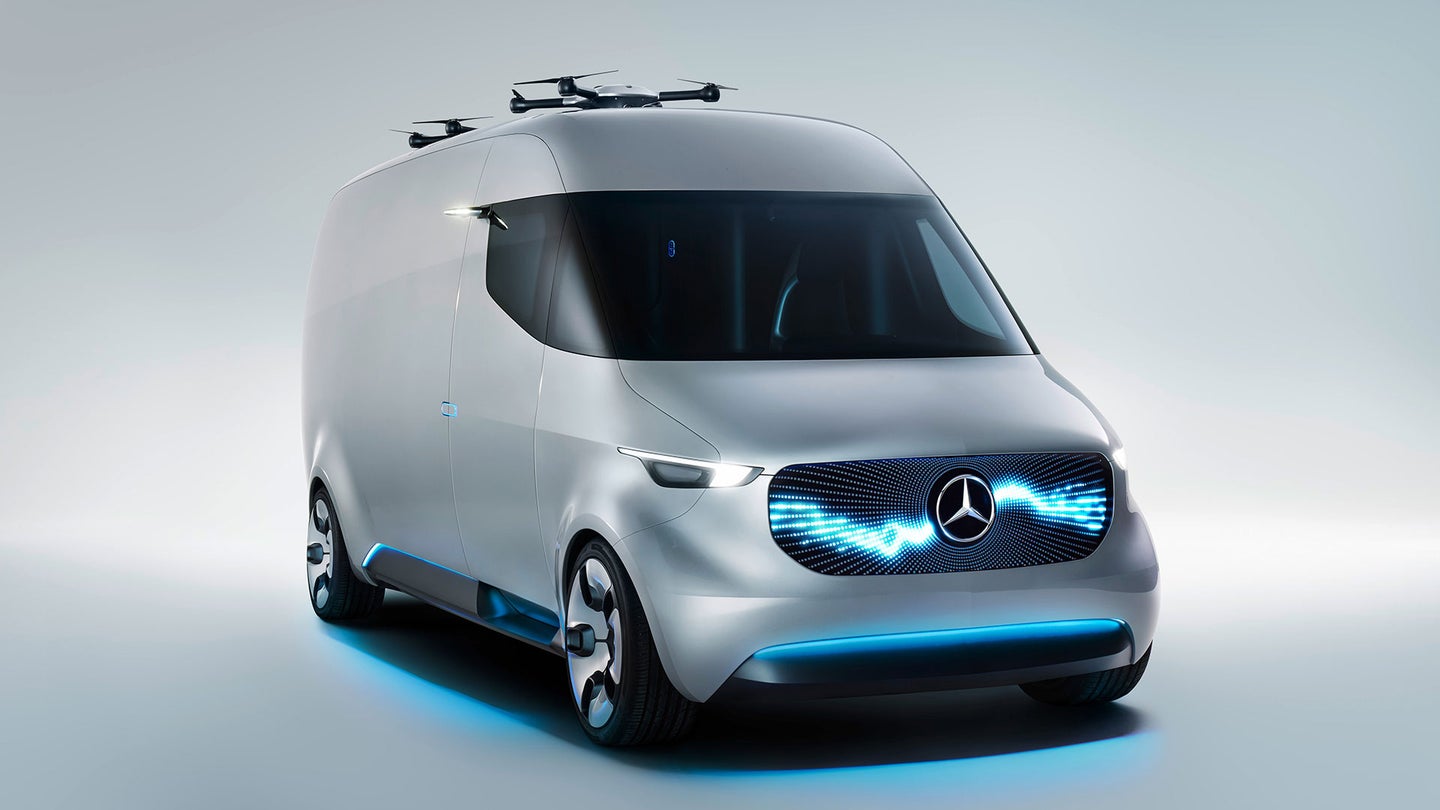 Mercedes-Benz wants to revolutionize package delivery. And it wants to do it with vans that serve as aircraft carriers for drones.

Online shopping is supposed to increase two-fold in 2018 compared to 2015, according to Mercedes-Benz. More shipped packages, in turn, means more loud, polluting delivery trucks on streets. Mercedes-Benz thinks it has a solution to reduce emissions and traffic at the same time without curbing consumers’ growing penchant for on-demand everything.

At this year's CES, Mercedes-Benz showcased the Vision Van concept vehicle it announced late last year. The design study is more than just an electric autonomous delivery van—it’s also a mobile launch pad for drones. The Vision Van demonstrates what a completely automated supply chain could look like as packages make their way from the factory all the way to customers.

The Vision Van is a driverless vehicle that (theoretically) would be automatically loaded by robots at a warehouse. The self-driving cargo van would then navigate to a central point in a neighborhood;  from there autonomous drones take the packages and depart from the van’s roof to carry them the “last mile” to their destination. For packages that require manual delivery, an automated system removes them from the van and hands them to the deliverer to eliminate sorting and restacking. And one more job-killing feature: it’s not just the driving and flying that’s autonomous—the drones also load themselves.

Many components and materials of the Vision Van are a bit too complex and futuristic to see the light of day, said a Mercedes-Benz engineer who spearheaded the project—which means UPS drivers can keep their brown uniforms for a little while longer. But some core elements of the study will eventually make its way into a production vehicle.

The German auto manufacturer invested in drone manufacturer Matternet, and is working closely with it to explore drone integration with Mercedes-Benz's commercial vehicles. The carmaker also developing multi-stop optimization algorithms that take into account traffic and other factors, such as deadlines, for delivery companies such as DHL. For consumers, this means that the same algorithms could be used in cloud-based navigation systems to help them figure out the fastest order to complete their errands, a feature that Mercedes-Benz says doesn’t yet exist. And eventually, consumers will see a lot fewer delivery trucks stopping in front of their homes...but they may need to install a drone landing pad on their doorsteps.