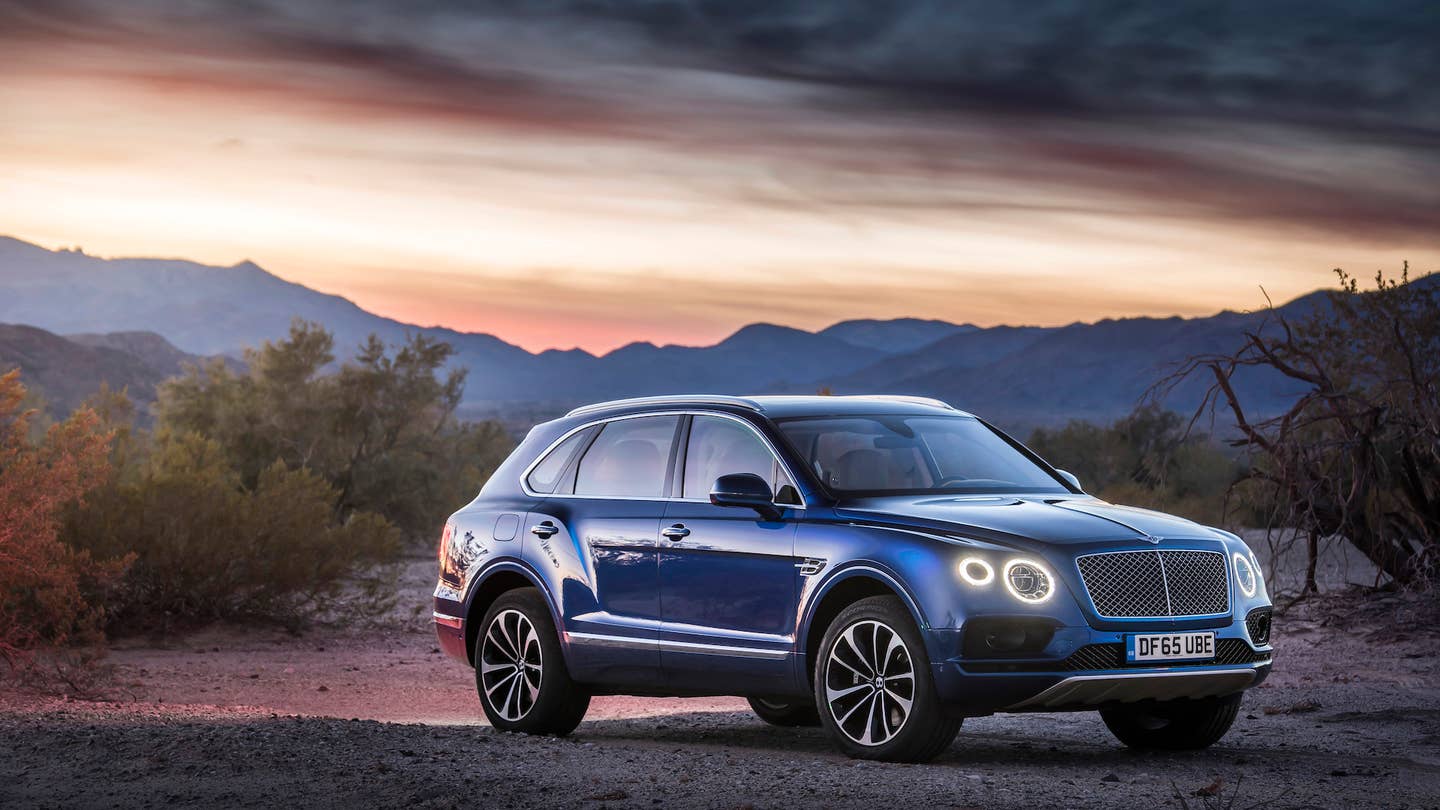 Bentley is working to expand its model range by adding several new variants of its Bentayga SUV and a new small sports car to go up against the Aston Martin Vantage, reports claim.

The British luxury car maker is planning a four-door coupe-crossover version of its SUV, a higher-performance sporty version, a plug-in hybrid trim, and a low-production long-wheelbase model, Autocar reports. The expansion of the lineup is likely a move to capitalize fully on the success that the Bentayga has brought this year.

The plug-in hybrid will come to market in 2018, and the coupe is expected to show up in 2019 — if Bentley's parent company, Volkswagen Group (VAG), green-lights it, Autocar says. Like most other SUV-coupes on the market, think the Mercedes-Benz GLE Coupe or BMW X6, the new model will likely have a more-sloped silhouette and may also be slightly more performance-oriented than the models currently on sale. The other, high-performance Bentayga will take design cues from the Continental GT3-R, Autocar reported.

“I’m confident that it will happen and our team is working on the case for this car, but it is not yet approved for production,” said Bentley CEO Wolfgang Dürheimer to Autocar. “We are the first in the luxury SUV space and at the moment unopposed, but there are lots of rivals coming to the sector. The question we need to answer is if there is space for all these different body styles.”

Bentley is also pushing to add a new smaller sports car, the Barnato, to its lineup, but the brand is waiting for funding from VAG—a process that has apparently been slowed down due to complications involving Britain's Brexit, Auto Express reports. The car will likely be a road-going version of the EXP 10 Speed 6 concept from the 2015 Geneva Motor Show.

In an interview, Bentley's CEO hinted that the company had a new model on the way. “We know what our additional product line will be,” Dürheimer said to Auto Express. “It will bring in new customers to Bentley—younger and more dynamic customers."

Though there were rumors a new SUV to sit below the Bentayga might be on the way, Dürheimer basically shot that idea down. "The problem with a smaller SUV is that it ends up against many other premium brands, not luxury ones," he said to Auto Express. "Whereas with the product idea we currently have, we will be up against our luxury rivals; this is what I prefer.”

And on top of all that, Bentley could be planning a move into the EV market. Dürheimer has previously said that a full-electric version of the EXP 10 could also see production, Auto Express reported. This car would likely be a sister car to the Porsche Mission E electric car and would be engineered on the same platform.