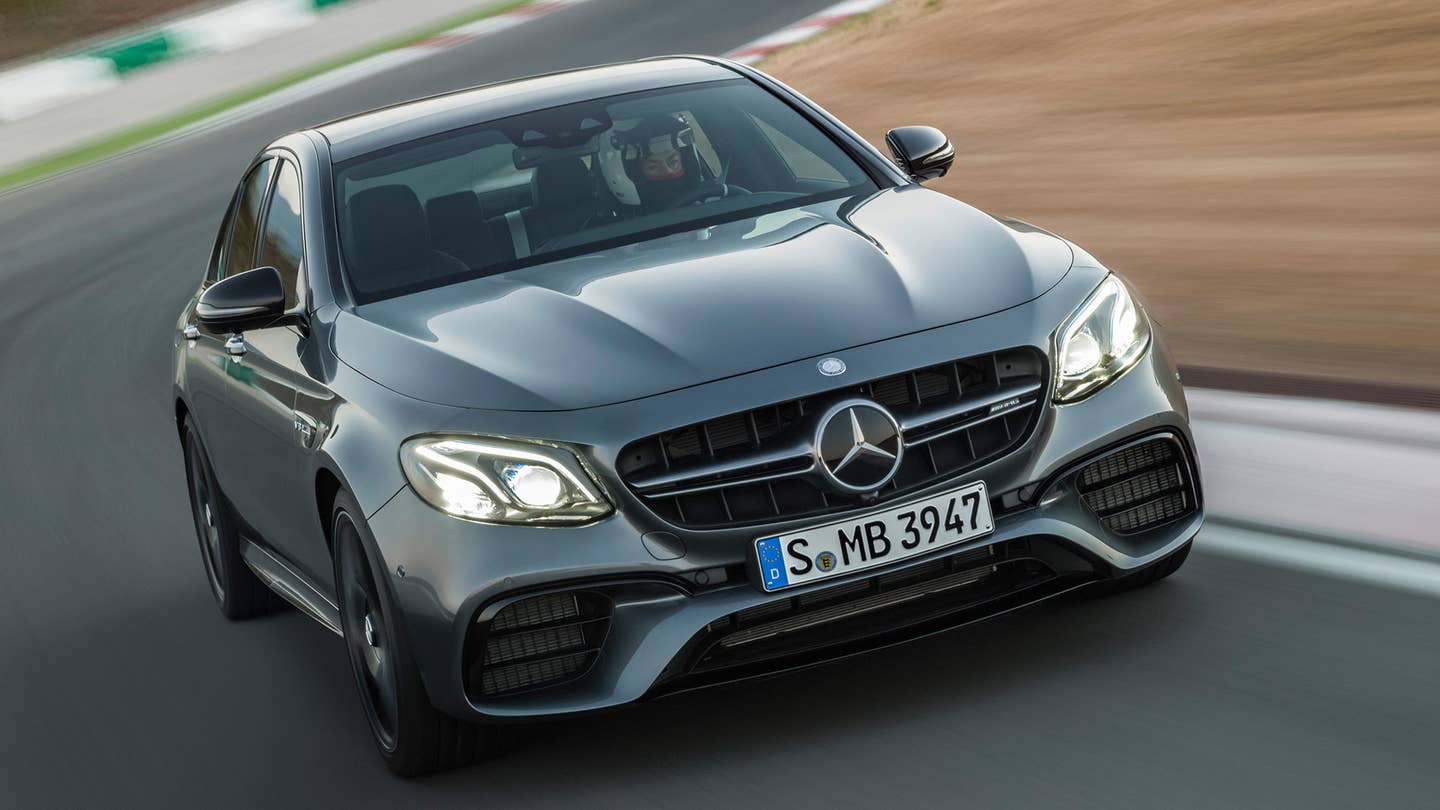 Mercedes-Benz will tell you that the big story with the 2018 Mercedes-AMG E63 and E63 S is the amount of power flowing from its engine. All due respect to the three-pointed star, but its P.R. people are wrong on this one. No, the big story here is that the latest AMG E-Class has found a way to negate the difficult choice between rear-wheel-drive hoonage and all-wheel-drive grip.

As with the previous model, both versions of the new AMG E-Class use the same engine in different states of tune. In this case, that’s the 4.0-liter hot-vee twin-turbo V8 that first showed up in the AMG GT S and has since made its way into the likes of the C63. In the basic E63 model, the engine cranks out 563 horsepower and 553 lb.-ft. of torque; spring for the pricier E63 S version, and the engine is dialed up to generate 603 hp and 627 lb.-ft. As Mercedes-Benz’s press release proudly boasts, that latter figure is enough to make the 2018 E63 S the most powerful E-Class to ever roll out of the factory doors...even if it does make the car roughly 10 percent less powerful than the most potent luxury sport sedan on the market today, the Cadillac CTS-V. (No, the Dodge Charger Hellcat doesn’t count.)

Either way, that power flows through an AMG wet-clutch nine-speed automatic transmission on the way to all four wheels...most of the time. (We’ll come back to that in a bit.) Thanks to the combination of nutso power, all those gears, four-wheeled grip, and what we’re guessing is a fairly aggressive launch control, the E63 S can rip from 0 to 60 miles per hour in 3.3 seconds, with the base model a mere tenth of a second behind. The S model will run into an electronic wall at 186 mph; the regular E63 will be artificially governed at the traditional German sedan marker of 155 mph.

But startling supercar owners when the light turns green and doing triple-digit speeds while calmly sipping a latte is only half the fun of driving an overpowered AMG sedan. Even if most drivers rarely take advantage of it, being able to drift around like Ken Block on a skating rink has long part of the AMG appeal. And while AWD doesn’t completely neuter that ability, Mercedes decided to take things up a notch by giving the E63 S the ability to operate as a rear-wheel-drive vehicle.

Pop the AMG Performance 4MATIC+ all-wheel-drive into the Drift Mode that Mercedes-AMG chairman Tobias Moers told us the car would have, and the front wheels are relegated to steering duties alone. The feature is only available when ESP is off and the transmission is in manual...but if you’re anything like us, that’s how you drive your AMGs 90 percent of the time anyway.

The full list of performance gear on the new AMG E-Class is long enough to make your eyes glaze over, but we’ll give you some of the highlights. Both models use a three-mode air suspension and a multi-mode electric power steering setup, but opting for the S-model over the regular E63 nets buyers an electronically-controlled rear limited-slip differential instead of a mechanical LSD, larger standard brake calipers, larger wheels, and dynamic engine mounts.

The 2018 Mercedes-AMG E63 and E63 S will make their official debut at the Los Angeles Auto Show next month, with units arriving in American showrooms come summer 2016. Which gives us plenty of time to start bulking up our triceps for all the drifting in our future.