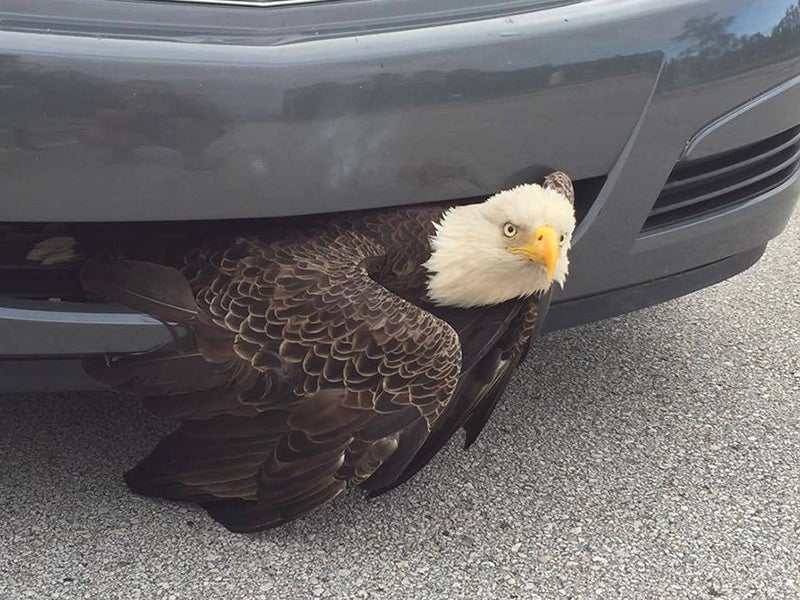 Let’s play a game. We’re going to give you a sentence, and you, dear reader, will have the chance to guess which state the incident in question occurred in. Ready? Here we go:

“A bald eagle wound trapped in the grille of a Saturn in the wake of Hurricane Matthew on October 8, requiring the assistance of local police and fire officials to free it.”

Did this occur in?

D.) All of the above

Congratulations. You got it right.

According to the Clay County Sheriff’s Department Facebook page, the noble bird became lodged in the grille of a Saturn after the car drove into the bird in flight. The sheriff’s department and the Clay County Fire Rescue were summoned to free the trapped raptor, at which point the nearby Bird Emergency Aid & Kare Sanctuary (B.E.A.K.S—get it?) picked up the bird and brought it in for rest and rehabilitation.

The eagle, which B.E.A.K.S. owner Cynthia Mosling told CNN is a 7-year-old male, has been named “Matthew,” for what we hope are obvious reasons. Matthew will be released back into the wild once he has been fully rehabilitated, the Clay County Sheriff’s Department said via Facebook.

It’s easy to lay the blame for this incident on Hurricane Matthew, the tropical cyclone responsible for hundreds of deaths in Haiti and dozens here in the United States. That storm, after all, was the one that whipped up the nasty weather that put poor Matthew in the path of that speeding Saturn.

But we all know whose fault this really is. The blame lies at Florida’s feet.

Indeed, is there a better metaphor for what Florida has done to this country than poor Matthew the Eagle, stuck behind that pre-bailout General Motors front faschia? The symbol of American liberty, trapped and embarrassed by a tacky piece of poorly-made plastic.

Keep in mind, this is not the first time a raptor has wound up pinned in the front end of a vehicle in the Sunshine State. The incident where a great horned owl wound up trapped inside a Ford Expedition’s grille, thus inspiring one of the best memes of all time:

Yeah. That was Florida.