No Argument: The Nastiest Finish in NASCAR All Year

It happened at Canadian Tire Motorsport Park in the Camping World truck series. 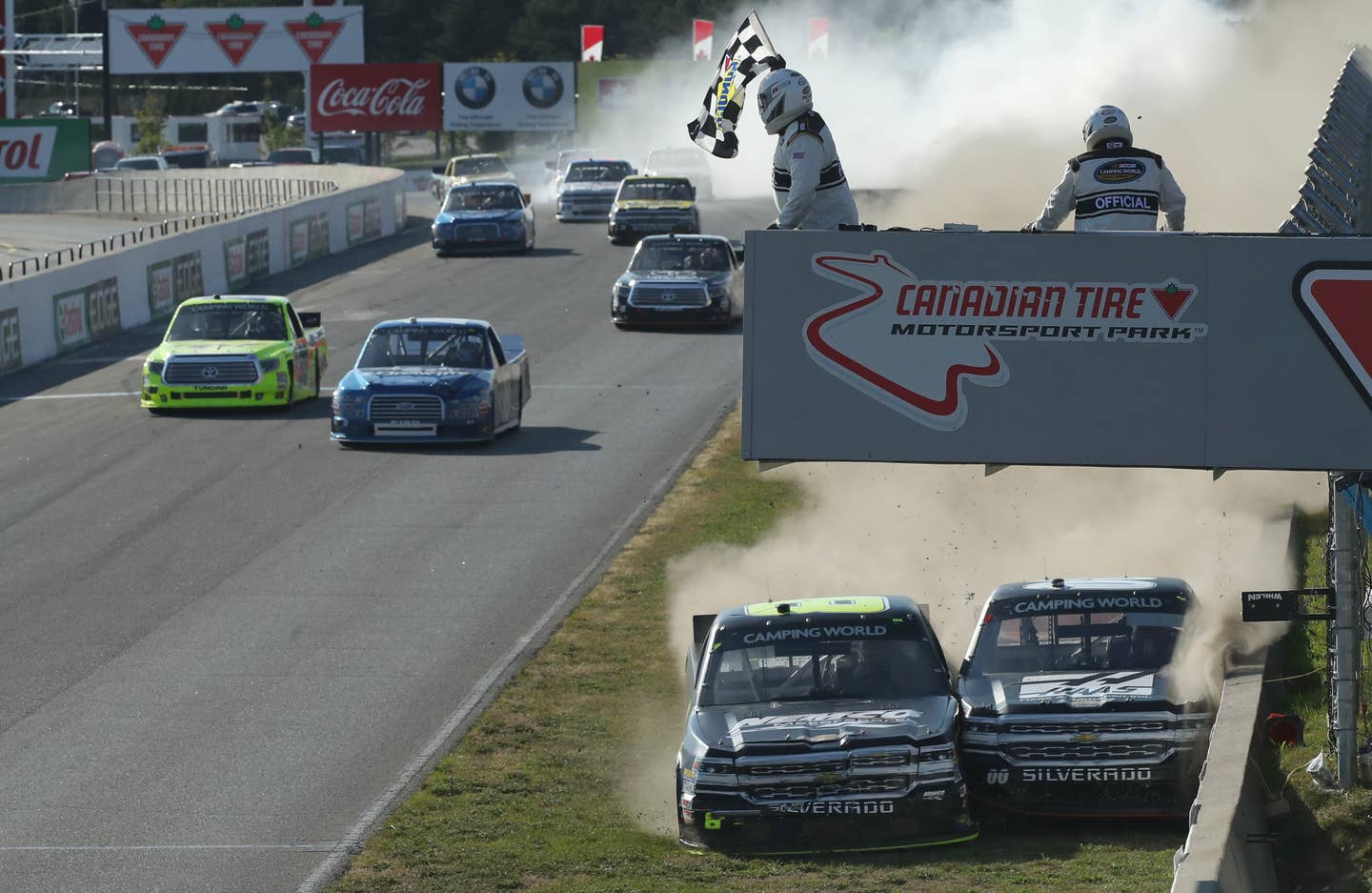 Five years ago on a chilly night at New Smyrna Speedway in Florida, John Hunter Nemechek – son of NASCAR racer Joe Nemechek – was all dressed up in Nomex looking like he was ready for a go-kart race.

John Hunter was named for his uncle, who was killed in 1997, the year John Hunter was born, in a NASCAR truck series crash at Homestead-Miami Speedway. Ever since he was just past toddler sized, John Hunter went to the track with dad Joe and mom Andrea, and it wasn’t unusual to see the kid dressed in a little firesuit.

But on this night, it was for real: John Hunter would be racing a late model at New Smyrna, a paved oval bullring that appears on the early resume of many of today’s stars. It would be, so far, the biggest race of his short career.

Joe wasn’t at New Smyrna, and I found myself hanging around John Hunter and his grandmother, Martha, a familiar and beloved figure in the NASCAR garages. After her son, Joe’s brother, was killed, Martha dedicated a great deal of her time to helping the families of other race car drivers who had been killed in action. She was a comforting presence on pit road – nobody didn’t like Martha.

Tonight, she was nervous, and understandably so: Little John Hunter – and I do mean little, and not just because he was 14, but because he was, and is, small for his age, and his baby face will guarantee he gets carded in bars until he’s 35 – would be on track with some very good racers. Martha was also proud, as John Hunter had already learned to work the phones for sponsors.

That was something he learned early on: Joe was always struggling for sponsors, and in fact, in 2009, John Hunter wore a white teeshirt at Daytona that had a hand-lettered plea to help sponsor his dad for the upcoming race.

John Hunter did not do well that first night at New Smyrna – he seemed to be the only one surprised by that. But he has progressed quickly, and at 19, he is winning in the NASCAR Camping World truck series.

Then came today’s race at Canadian Tire Motorsport Park, on the truck series’ only road course of the season. On the last lap, Nemechek was behind Cole Custer, a youngster who also has a racing pedigree – his father is a prominent part of Gene Haas’ Formula 1 team.

On the last turn of the race, Nemechek hit Custer’s truck, then hit it again, finally pinning Custer against the outside concrete wall as they approached the finish line.

Both were wide open on the grass – Nemechek was slightly ahead as they drove in the dirt under the checkered flag. And only then did Nemechek steer away from Custer.

It took NASCAR nearly five minutes to determine the winner, during which time Custer bolted for the track and tackled Nemechek, and the two scuffled briefly. Wisely, Nemechek still had his helmet on.

After Nemechek was finally declared the winner, in his victory lane interview, he said Custer would have done the same thing to him. Doubtful. What still-little John Hunter Nemechek did was win at any cost, with what some might insist was a series of dirty moves. His dad Joe was one of the cleanest drivers NASCAR had. You wonder if Joe believes he could have gone farther had he been more aggressive, and passed that belief on to John Hunter.

The finish was especially significant as NASCAR is starting a version of the “Chase for the Championship” this year for the trucks, and due to a previous victory this year, Nemechek was already in. Custer was not. Custer had a lot to lose, and he lost it.

One final note: John Hunter Nemechek, the kid who was so conscious of the need to have a major sponsor, didn’t have one on the truck today. I guess we’ll see if his performance today will help or hurt that quest.