YouTuber Accused of Crashing a Plane for Views. Now the Feds Are Investigating

Everyone’s talking about it, including the FAA. 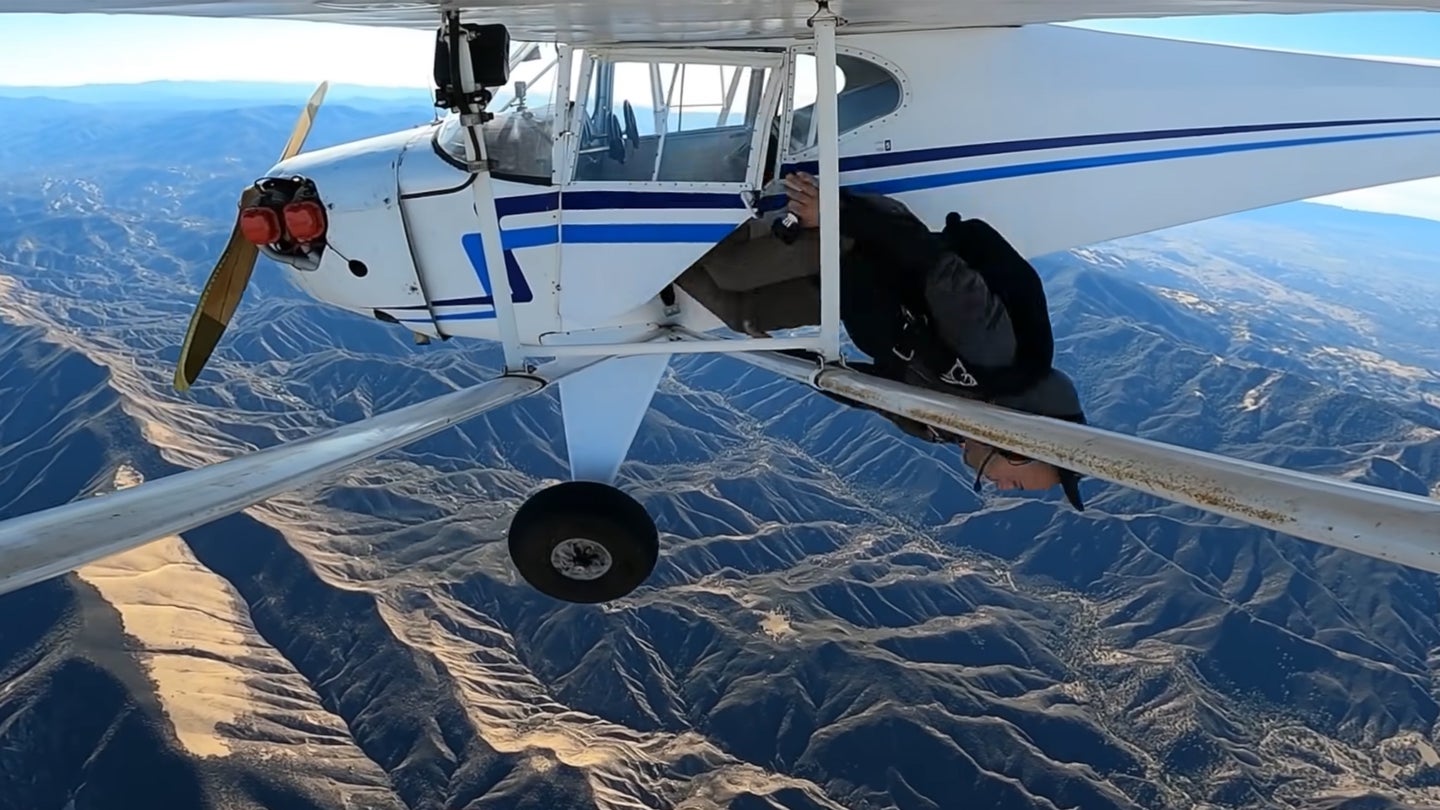 A YouTuber and former Olympic snowboarder has been accused of crashing his plane on purpose for clicks, and the FAA has opened an investigation to get to the bottom of the growing mess.

Trevor Jacob has been the subject of online criticism after posting a YouTube video where he parachuted from a Taylorcraft BL64 plane and filmed it crashing into the hills of the Los Padres National Forest near Cuyama, California. The video outlined his newly-purchased Taylorcraft's final flight on Nov. 24, 2021, a trip from the Lompoc City Airport in Santa Barbara to Mammoth Lakes where he planned to partake in some general adventuring like paragliding and snowboarding. Jacob also mentioned that he would be spreading the ashes of his friend Johnny Strange during the flight. Strange was killed in a wingsuit accident in 2015 and Jacob explains that he loved the Sierra Nevada Mountains.

During the flight, however, the Taylorcraft's engine supposedly lost power, stalled, and could not be restarted. Jacob then points the plane nose-down and exits, sending the unoccupied aircraft into the ground.

Jacob continued to film himself as he descended and proclaimed, "This is why I always fly with a parachute." He then trekked back to the wreckage and hiked until a farmer, who he credits with saving his life, found him in the darkness.

This is where things started to go south.

The video of the incident was posted to YouTube where it immediately began racking up views. The aviation sector of YouTube wasted no time picking apart Jacob's claims. At the time of writing, the video has reached over one million views. It also amassed more than 5,000 comments, many of which called out the crash as being staged. Comments on the video have since been turned off, but that hasn't stopped people from making reaction and explainer videos that point out abnormalities in the pilot's videos. It’s worth noting here that some suspect the video currently on Jacob’s YouTube to be a trimmed-down version of what was originally uploaded. However, a few of the segments can be found when looking at other videos uploaded by YouTubers critiquing the pilot’s handling of the situation.

For starters, the comment about Jacob always wearing a parachute was identified as misleading. Several YouTubers reviewed the limited number of flying videos that Jacob posted and noted that they could not locate another video of the former Olympic athlete wearing a parachute when flying, let alone a sport parachute like what was worn in the video. It's worth noting that many pilots of small general aviation aircraft do not fly with parachutes, as cabin space is very limited. However, to Jacob's credit, he can be seen wearing the same chute harness in an Instagram photo from September.

Another video points out that when Jacob jumped from the plane, what appear to be two fire extinguishers were strapped to his legs. Again, an atypical sight.

There were other weird items picked from the video, like a disconnected fuel selector valve, and the instrument-facing camera which is turned off just before the engine issue occurs. Commenters also point out that his microphone isn't plugged in, that he appears to be acting poorly, and that he had no reason to hike back to his plane if it didn't have emergency supplies. These are all speculative, and while they don't prove that Jacob was acting in bad faith, they are legitimate concerns. Global Air points out that Jacob only received his pilot's license in mid-2020, so are these rookie mistakes, or not-so-meticulously planned moves? That's for the Federal Aviation Administration to decide.

Aviation YouTuber Trent Palmer dissected the situation in a video of his own. The upload points out that another one of Jacob's planes was supposedly seen circling the crash site days prior on FlightAware, a flight tracker which records the real-time and historic paths taken by a plane and makes it searchable via the aircraft's tail number.

Perhaps just as intriguing is that the Taylorcraft BL64 was purchased about a month prior to the accident. Jacob is quoted as telling the previous owner that he was going to "do something special" with the plane, but didn't elaborate.

The FAA has launched an investigation into the crash, as confirmed by AVWeb.

The Santa Barbara Independent spoke with individuals at the Lompoc airport who claimed it didn't seem that Jacob intended to make a complete flight to Mammoth as he claimed. The aircraft was said to be in a state of "disrepair" and in need of maintenance, which Jacob reportedly struggled to complete himself. Several days after the crash, Jacob returned to the airport and was informed that he needed to file a report to the FAA. Jacob then reportedly chartered a helicopter to remove the wrecked plane and transported it to an unknown location.

My calls to the Lompoc airport to confirm this information were not returned at the time of writing, and the FAA does not comment on individual investigations.

Bob Perry, a local flight instructor at a Santa Ynez Airport, told the Independent that Jacob's claims are "all very suspect." Perry believes that the claims of there being "no safe place" to land the Taylorcraft were misrepresented, as the plane could have cruised at least 15 or 20 miles given the conditions.

If Nov. 24 rings a familiar bell in your head, that's the same day that D.B. Cooper famously jumped from a hijacked plane with $200,000 in ransom 50 years prior.

Whether or not Jacob will be prosecuted for the crash, or if he will have his pilot's license revoked, will take some time to play out. The FAA is notoriously thorough in investigating matters like these and often takes a year or longer to produce a final report and recommendation. But most importantly, if the FAA does decide he's guilty, it must prove that Jacob showed intent to break the law and federal aviation regulations.