Authorities estimate there are two million phony Texas paper tags across the country. 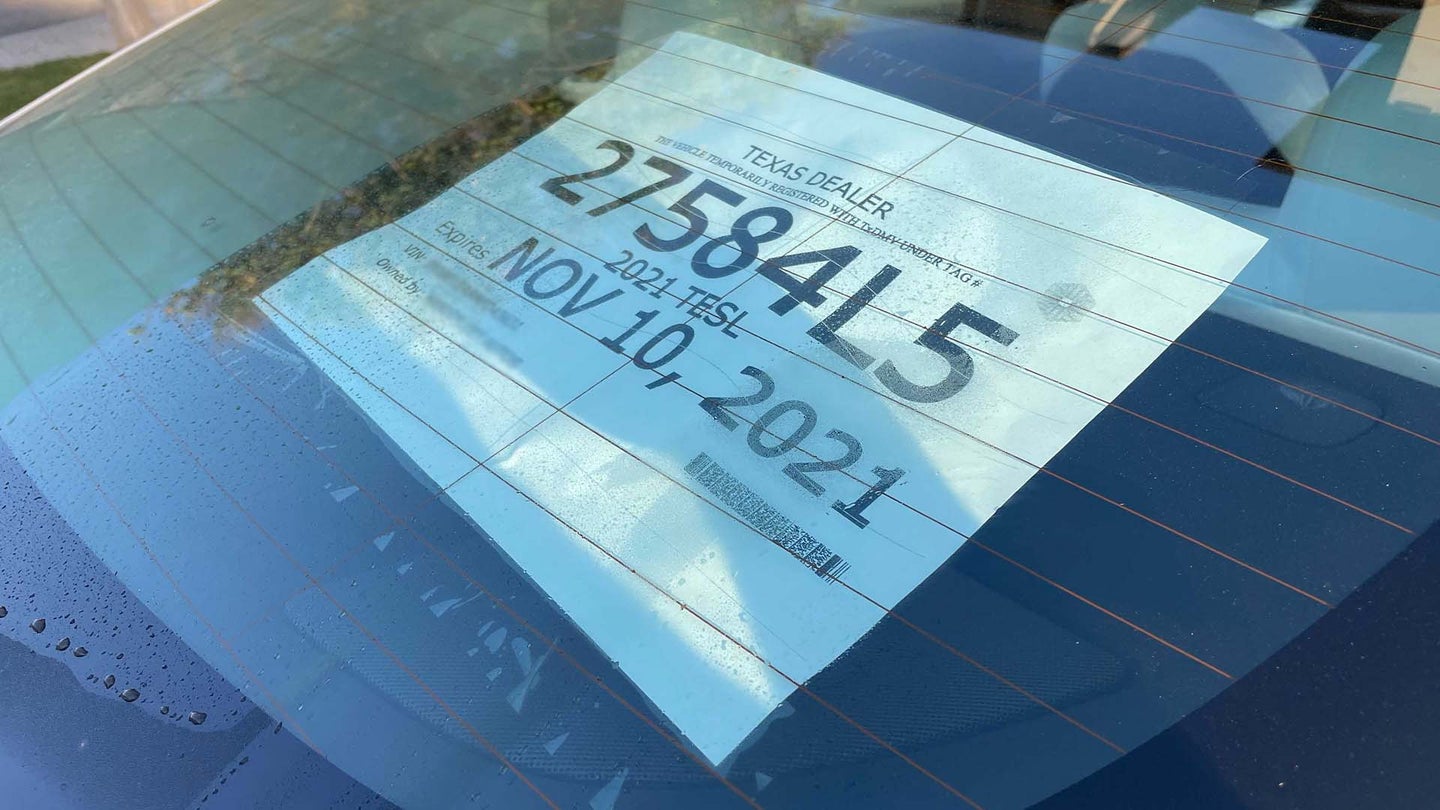 Whether they're buying a new or used car, people in most states are typically provided with a temporary paper registration tag to ensure they can legally drive it on the road until a metal plate arrives. In turn, if you see one of these paper tags, it usually means the driver just scooped up a new ride. That's not always the case in Texas, though, as it's evolved into something a lot more complex.

Texas has a temp tag problem. According to the Houston Chronicle, many drivers have begun treating these paper tags as permanent. And while some tags are outright forgeries, many more are being issued from state-licensed auto dealers who exist not to sell cars, but simply to peddle temporary registrations.

Becoming a licensed car dealer in the state of Texas is easy—that's why there are about 25,000 new and used car dealers who call the Lone Star State home, at least on paper.

As long as someone is willing to pony up $700 and six hours of their time for an online course, they can be considered for a state-appointed dealer's license. There are some other requirements, like providing identification and proving that the license will be issued to a physical location to sell cars. At face value, this seems like enough to weed out illegitimate dealers. But police say that simply isn't the case.

“You can get one in an igloo in Alaska if you pay for it and have a printer,” said Sergeant Jose Escribano of the Travis County Constable’s Office to the Chronicle. Escribano and his investigator colleagues estimate that as many as two million improperly issued Texas temporary tags exist on vehicles across the nation.

A small number of these licensees have found that it's easy to game the system. And if they're suspected of operating fraudulently, they may be able to continue operating within the Texas Department of Motor Vehicles' online vehicle registration portal for months before being locked out.

By continually issuing temporary registration tags, these "dealers" are able to circumvent state registration requirements, as well as the annual safety and emission inspections. There are also drivers who reportedly buy these tags to avoid paying tolls or fines from stoplight and speeding cameras. Another subset purchases them due to having a suspended license or other various legal hurdles which prevent them from legally registering a vehicle.

And then there are the more serious crimes committed involving vehicles that sport these tags—like a Texas officer who was struck and killed in 2019, or another involved in the shooting of a New Orleans officer visiting Houston. The paper plates are a problem out of state as well; according to the Chronicle, the plates are so frequently tied to carjackings and robberies in New York that the NYPD ordered its officers to check any paper Texas tags against the VIN number of the vehicle that it's affixed to.

The dealers selling these temp tags aren't doing it quietly—many are even selling them like a legitimate product. The Drive was easily able to find dozens of examples on Facebook Marketplace offering two-month temp tags for between $35 and $60, payable via PayPal, Cash App, or Zelle. Others on Reddit report seeing individuals advertise these plates on Instagram, Snapchat, and Craigslist.

But just because they're advertising doesn't mean it's legal.

The United States Department of Justice announced in May that three individuals were charged with using Texas as a headquarters to run a nationwide temp tag scheme. The parties were accused of using forged identities, property leases, and office photos to register as a dealer in Texas. The fake dealerships would use the registration system to falsify car sales in order to issue temporary license plates and ship them to customers across the country via email in PDF format.

In a 17-month span, the ring used four fraudulent dealerships to sell nearly 600,000 Texas-stamped temp tags. One of the dealer accounts generated 430,000 tags before officials cut off access to the online system. Another phony company registered 108,000 more during a three-month period, and two additional bogus licensees produced a combined 50,000 paper plates.

Investigators reportedly spent months attempting to track down the dealerships and verify that they didn't actually exist. Only then could the DMV cut off the dealer's access to the online registration system.

Authorities say that Octavian Ocasio, the self-titled "Used Car King of New York" who was just one of the three men arrested earlier this year, sold as many as 3,000 temp tags in a year's time. His take rate? $250,000, or around $83 per plate, according to the New York Post.

Earlier this year, Texas Governor Greg Abbott signed a bill into law that would aim at setting a maximum annual limit of temporary plates issued by a dealership. The specifics of how that number is calculated is still a work in progress, and until the regulatory bodies actually create the limits and rules surrounding them, the problem is expected to continue.