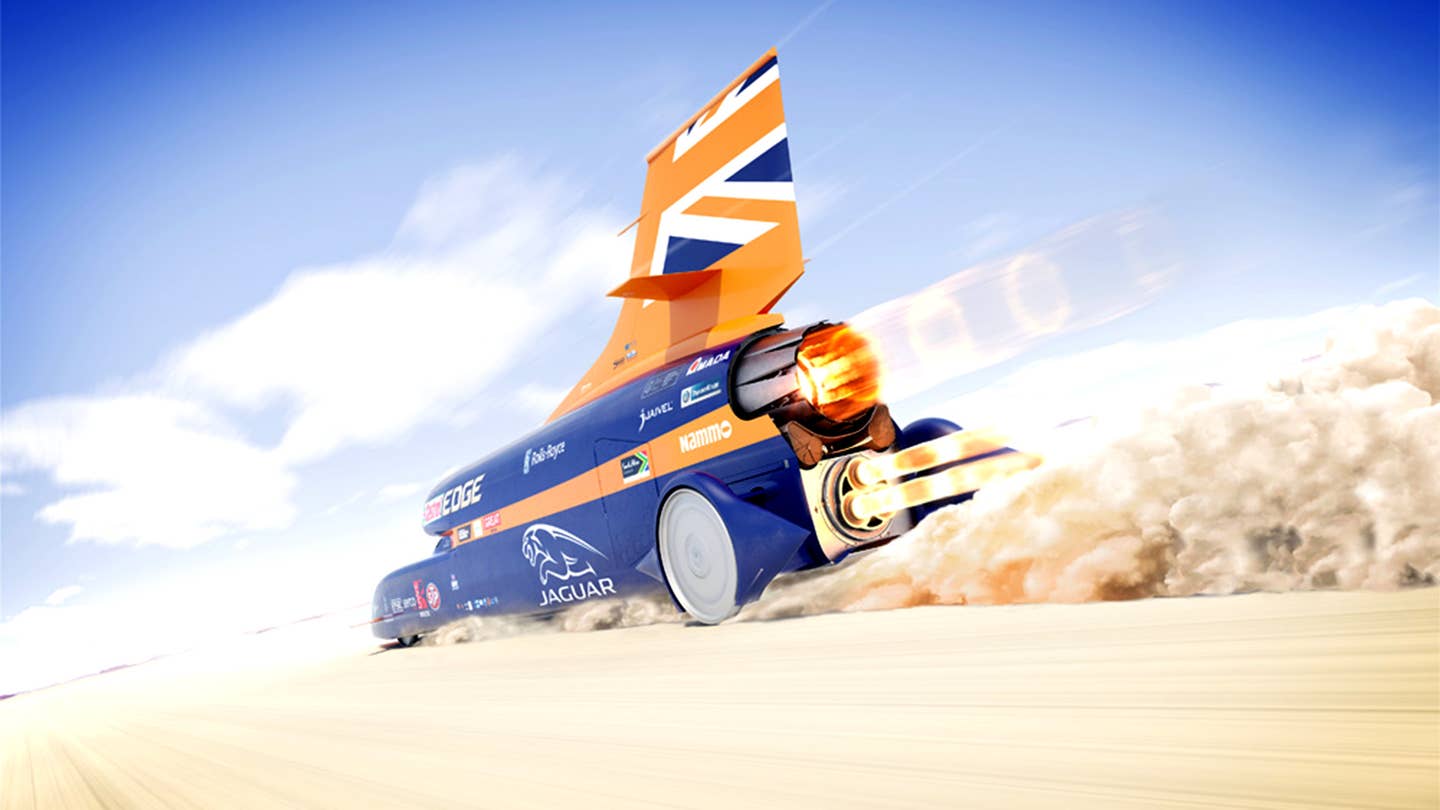 The United Kingdom-based crew behind the Bloodhound SuperSonic Car, better known as the SSC, has obtained a new batch of funds that will allow it to begin final preparations for its planned attempt to break the world land speed record. If all goes according to plan, the projectile-shaped car will reach at least 1,000 miles per hour on South Africa's Haskskeen salt pan in the near future.

That may seem like a lot, but it’s not much in the realm of supersonic vehicles. As chief engineer Mark Chapman put it, “Our budget would not buy you a single system on a modern military jet.” To put it in terms of another favorite British speed-centric pastime, the £45 million outlay is less than one-tenth of what the top three Formula 1 teams—which, coincidentally, are all English—spent on the 2015 season.

The ballooning costs have gone hand-in-hand with delays. The new schedule envisions a 200-mph test at the Newquay Aerohub in Cornwall, England around Easter 2017—a test that was meant to happen at least three years ago. After that, the team plans an 800-mph practice run the Haskskeen Pan using the Bloodhound’s jet engine and just one of its Nammo hybrid rockets. If successful, that speed trial would establish a new land speed record; the current record is 763 miles per hour, set in 1997 by ex-RAF Wing Commander Andy Green, the same man who’ll drive the Bloodhound SSC. Assuming none of those milestones end in tears, the 1,000-mph record attempt will occur the following year, in 2018, using the jet engine and all three of the Bloodhound’s rockets.

The delays aren’t surprising for a mission operating in uncharted territory. Going 1,000 miles per hour in a wheeled vehicle on land is faster than fighter jets travel when close to the ground. The project engineers have had to redesign various components during testing, many of them involving serious changes. The design team had to put the Rolls-Royce EJ200 jet engine above the Bloodhound’s 44-foot-long, six-foot-wide main body instead of inside the body, as was originally planned, because the intermixing of the jet and rocket thrust proved problematic for aerodynamic and safety reasons. The nose cone had to be reworked to prevent lift. The tail fin grew 70 percent, also for aerodynamic reasons. And the car still needs to be re-engineered to fit all three rockets.

The biggest challenge isn’t going fast, though—it’s stopping. The Bloodhound gang tried using carbon brakes like those on jet aircraft, but they shattered. The team switched to steel brakes, but slowing down from top speed remains a four-step process; the SSC will coast down, then deploy an airbrake, then release a parachute, and only then engage its traditional brakes. To paraphrase an old aviation axiom—accelerating is optional, but stopping is mandatory.